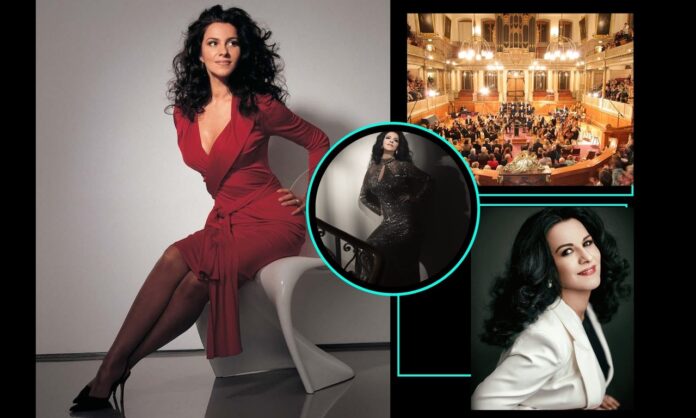 Star soprano Angela Gheorghiu joined the Oxford Philharmonic Orchestra at The Sheldonian over the weekend to perform some of Verdi’s most dramatic arias, and was absolutely phenomenal.

She filled The Sheldonian with her astonishing vocal range and power, wringing every ounce of pathos and pain from the music, and delighting her audience with her intensity, warmth and sheer overwhelming talent.

She also gave an object lesson on how to be fabulous at 56 in a tightly-fitted black velvet dress and a huge, flounced silver and black organza cape before pouring her heart out with a voice that has only become richer and more powerful over the 3+ decades since she made her debut in the Royal Covent Garden opera house.

The evening opened with Mozart’s Overture to The Marriage of Figaro, familiar charming and beautifully played.  The rest of the first half was then devoted to the world-premiere of a rich and romantic “Puccini Fantasy for Cello and Orchestra”, written and performed by the Oxford Philharmonic Orchestra cellist, and professor at the Royal College of Music, Mats Lidstrom.

And it was wonderful to behold, as the Oxford Philharmonic Orchestra introduced this new piece supported by its loyal Oxford fan base, with friendly interchanges between players and audience throughout.

Our gratitude has to go the Oxford Philharmonic Orchestra for bringing world-class performers and gorgeous music into such exquisite settings – this was Oxford at its musical best. We are lucky to be living here.

For future dates and concerts go to https://oxfordphil.com/events/