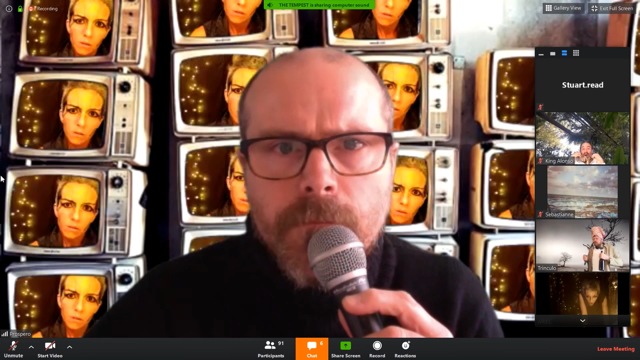 The Oxford-based Creation Theatre Company has a great reputation for putting on ambitious and energetic performances in imaginatively unusual settings, and their ongoing production of Shakespeare’s ‘The Tempest’ continues the tradition.

The audience are Zoomed into cyber-space with an interactive, online performance of a radically abridged but joyously chaotic hour of fun and mayhem, where Prospero commands the action in front of a bank of retro 1950s tellies.

Ariel, whose Scottish assertiveness is brilliantly captured by Spanish actor Itxaso Moreno, drives the action along at a rattling pace, and the surreal atmosphere was only enhanced by the slightly stop-start wonkiness of the technology (huge temptation to make an Ariel/aerial joke here).

The audience are also visible in the gallery of Zoom screens, all watching and being watched, as isolated and trapped in the play as we all are in our locked-down homes.

Under Prospero’s surveillance of actors and audience alike, we are compelled by Ariel to create the magical tempest ourselves, rubbing hands for  ‘soft light rain’, and banging for thunder.

This isle is full of noises, all right – we bark, howl, clap and sing, all at Ariel’s command, before  drifting gently back to our own Covid-induced craziness to the nostalgic tune of Glenn Miller’s ‘In the Mood’.

The show has been extended and remains hugely popular, with people across 13 countries watching it last weekend alone. It will continue as long as people keep buying tickets.