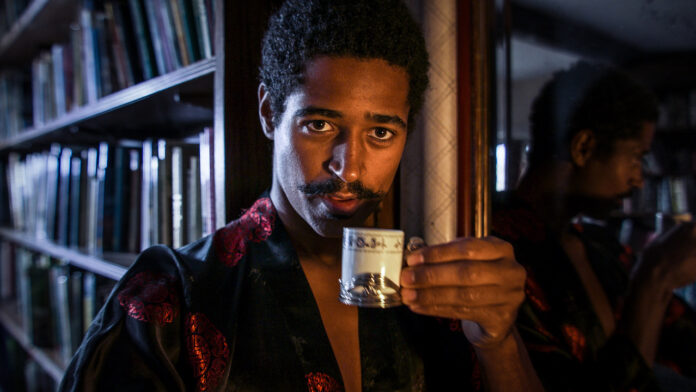 If director Tamara Harvey’s intention was to bring The Picture Of Dorian Gray kicking and screaming into the 21st century, then it succeeds instantly.

Co-presented by Oxford Playhouse and set unapologetically in our current world of technology, social media and Grindr, this is a morality tale like no other.

That The Picture Of Dorian Gray has been produced at all, let alone with such an eye-wateringly star-studded cast, and a finish comparable to a polished TV show, is an enormous achievement in itself.

But to press home Oscar Wilde’s Oxford-centric parody of the pitfalls of vanity and narcissism in our Instagram-savvy, reality-TV led, selfie taking, internet focused existence gives it any entirely new and valid grounding.

Throw in our present-day, stir-crazy, paranoid, claustrophobic, pandemic reality and you have the perfect storm.

Not so much a revelation as a rather withering reflection of modern life, Henry Filloux-Bennett’s adaption of The Picture Of Dorian Gray is therefore accessible to a whole new generation of theatre-goers – those who prefer being online.

The staging is as clever – we find Lady Narborough – played by a mesmerising Joanna Lumley – being interviewed in the aftermath of Dorian’s death by an endearingly dishevelled narrator aka Stephen Fry.

Alongside Dorian’s best friend Henry Wooton, played brilliantly by a machiavellian Alfred Enoch, the trio are trying to ascertain what went wrong.

And so the tale unfolds at a cracking pace, more of a whodunnit or thriller than Wilde’s original depiction.

We meet Dorian himself, played by Fionn Whitehead, (who ironically has 7.2K followers himself on Instagram) an impoverished student seemingly unaware of his magnetic effect. His seemingly innocuous vlog fast turns him into a social media sensation, thanks to the input of computer whizz Basil Hallward (played by Russell Tovey) whose permanent filter has such dire consequences.

And so the die is cast, and Dorian’s followers increase as fast as his own depravity and vacuousness.

Dorian’s bisexual desires are refreshingly liberated before he turns his full gaze on singer and actress Sibyl Vane, played so intoxicatingly by Emma McDonald.

McDonald stole the show for me, her tangible emotions, vibrant youth, enormous talent and breathtaking vulnerability absolutely spot on, especially during these difficult times when so many relationships take place on screens.

Their love affair is touching but fated, Sibyl proving the catalyst for Dorian’s downfall, yet his fans clamour for more, his appeal irresistible.

And so Dorian ultimately loses himself, victim to his own online success, dragging down everyone in his wake until only Lady Narborough, Wooton and the narrator are left, bemused but strangely defiant.

Finally something relevant to us all. And while sometimes that’s certainly to the deficit of the original text, this new adaption of The Picture Of Dorian Gray makes for a riveting ride.

And as I turned off my screen I wondered whether in 100 years time Filloux-Bennett and Harvey’s adaption will appear as prophetic as Wilde’s.

The Picture Of Dorian Gray is a co-production with Oxford Playhouse, the Barn Theatre, Lawrence Batley Theatre, New Wolsey Theatre, and Theatr Clwyd, and is being screened until March 31. Book at https://www.oxfordplayhouse.com/whats-on/all-shows/the-picture-of-dorian-gray/13800/#schedules