Having never seen the film or previous stage productions, the opening night of Cabaret at the New Theatre is a show that will certainly stay with me.

the extended standing ovation that followed was so very much deserved

As 1931 rolls in, the Nazi’s are rising to power and everything is changing. The seedy Kit Kat Klub is at the epicentre of the story, but the outside world is encroaching on the hedonistic party atmosphere within.

John Partridge – probably best known to television audiences as Eastenders Christian Clarke and Celebrity MasterChef champion 2018, is on stage as Emcee. As the Master of Ceremonies, he really knew how to press our buttons.

He has previously said Emcee is one of his “bucket-list roles” – and he plays it brilliantly. With his imposing vocal and dance talents, vast experience in West End musicals and having lived in Berlin for ten years, I couldn’t imagine anyone better suited to the role. It’s a cliché, but there’s no denying he stole the show.

Having said that, I was glad I wasn’t in the first few rows, as some of his lewd behaviour and intense stares out into the crowd must have been quite intimidating up close!

Throwing plenty of crude gestures at the audience throughout the night and scolding us in character when we don’t applaud loudly or enthusiastically enough for his liking, he still manages to draw us back in whenever he wants us – his crowd control unerring.

The debauchery, racy and sometimes garish routines by Sally, Emcee and the rest of the talented cabaret performers were balanced out with the quieter, sweet scenes between the legendary Anita Harris as Fraulein Schneider and her suitor Herr Schultz (James Paterson).

The costumes were dazzling – mostly stockings and sequins for the ladies and leather hot pants for the gentlemen. The staging and choreography were sublime, and the iconic songs ‘Money Makes the World Go Round’, ‘Maybe This Time’ and of course ‘Cabaret’ were included. But this is not a facile song and dance show with a happy ending. It’s much more powerful than that.

As Hitler put an end to Berlin’s partying ways, closing cabarets and transforming the country, the insidious nature of creeping prejudice envelops the country and infiltrates the character’s lives.

The routines become unsettling. Raunchy or funny scenes suddenly turn disturbing, or even a little grotesque. The ability of the cast to transform the tone in the room, to make us laugh in one moment then fall into uncomfortable silence the next was incredibly effective.

The show contains nudity and is definitely not appropriate for children or those easily offended. Yet even if you don’t usually enjoy musicals, this one is absolutely worth seeing.

The stunning finale was an emotional punch to the stomach, leaving me with a lump in my throat and battling tears – partly because the themes feel so painfully relevant in today’s political climate.

As the curtain went down, we were left in a long, poignant silence that felt awkward to break with applause, but the extended standing ovation that followed was so very much deserved.

On until Saturday, this show won’t easily be forgotten. Don’t miss it. 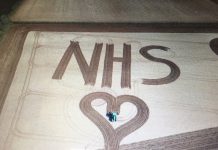 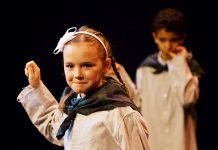 Stuck for ideas? Creation Theatre comes to the rescue with a 12 week virtual drama course for children aged 5-10 and teens aged 11-16! 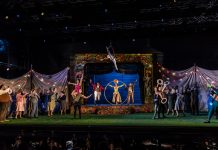