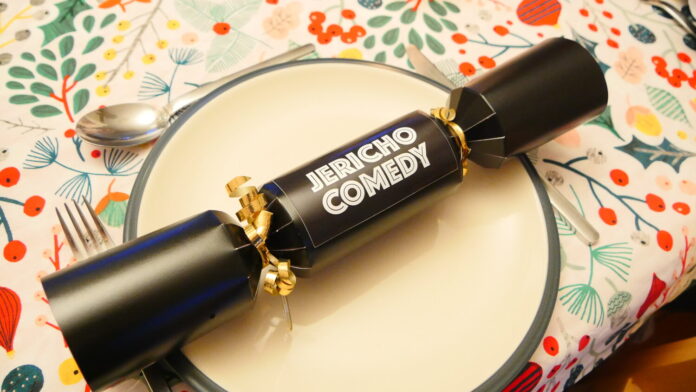 Jericho Comedy is absolutely determined to bring the people of Oxford some Christmas cheer, pandemic or no pandemic.

Which is why their family friendly Harry Potter show ‘The Show That Must Not Be Named’ at The North Wall in December is already selling out fast.

Their very own range of Jericho Comedy Christmas crackers for Oxfordshire Mind sold out in just three days, but with new stock just in, strike while the iron is hot!

The Harry Potter themed The Show That Must Not Be Named is an improvised tale of magic! From heists at Gringott’s to dementors on their tea break, hufflepuff horcruxes to exploding hippogriffs, from weird welsh dragons to trolley witch conspiracies… it has to be seen to be believed.

And while Jericho Comedy’s performance at Oxford Playhouse has sadly been cancelled, The Show That Must Not Be Named is instead running at The North Wall from December 10-12 (lockdown restrictions permitting).

Jericho Comedy’s Harry Househam said: “We are doing four shows at the North Wall from December 10-12 of our family-friendly Harry Potter show ‘The Show That Must Not Be Named’, with a stand up show thrown in for good measure on the evening on 12 December.”

“The show is completely family friendly, and perfect for fans of all ages and magical abilities to enjoy (age recommend 7+).”

To raise money for Oxfordshire Mind, Jericho Comedy has also put on their thinking caps and come up with the perfect Christmas accruement – Jericho Comedy’s very own Christmas crackers.

Each cracker has the much loved paper crown, a joke written by a Jericho Comedy comedian, (someone who has appeared at Jericho Comedy in the last five years), a fun fact and a prize inside including donated goodies from local businesses.

Here are some of the impressive prizes:

Every box of crackers also includes a pair of tickets for a Jericho Comedy show worth around £14.

The first batch unsurprisingly sold out in under three days, but more have since been released.

Harry added: “There’s no need to buy your crackers from a supermarket this year, support a great local charity instead! Get your crackers, and do some Christmas charity in this season of good will.”

Because as well as bringing Christmas comedy cheer to our homes, 100% of profits from the crackers go to the essential work of mental health charity Oxfordshire Mind. (Recommended age 15+).

“We see these as comedy community crackers. By buying them you are supporting your local comedy club, a great local charity, and local businesses,” Harry adds.

As if that wasn’t enough, Jericho Comedy has spent the pandemic being creative about keeping people entertained during lockdown or social distancing, whether online, at comedy drive ins or floating in punts on the River Cherwell. “We are absolutely committed to having a laugh and getting Oxford smiling once more, Harry adds.”

So if you fancy a laugh, crackers can be bought at www.jerichocomedy.com/crackers

Tickets for The Show That Must Not Be Named at The North Wall on Dec 10-12 can be bought at https://www.thenorthwall.com/whats-on/the-show-that-must-not-be-named/