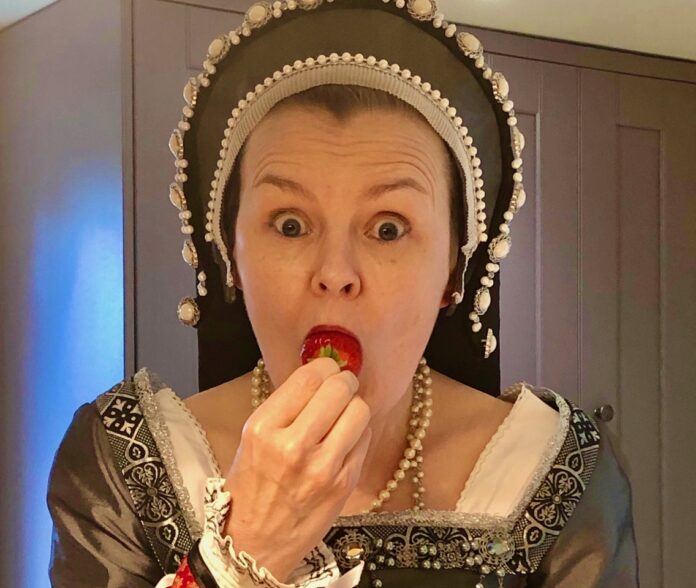 The Marketing and Sponsorship Manager for The Oxford Festival of the Arts, is keen to point out that she will not be encasing a peacock in pastry or cooking a badger anytime soon – both Tudor feast favourites apparently – but has something far more sumptuous and delicious planned for viewers when she goes live online on July 5, as part of the 18 day online Oxford Festival of The Arts.

The #OFAVirtual theme this year is Field Of The Cloth Of Gold, after Henry VIII’s extravaganza in 1520, so the Tudor cookery demonstration is more than relevant.

Thumbing through old Tudor cookbooks for inspiration, Alexis’ Tudor cookery demonstration will take the culinary offerings of the festival’s 2020 online programme to a whole new level.

Alexis said: “I’ll be making a Tudor dish called Strawberye, which contains strawberries, almond milk and the odd raisin of Corinth which I have had to procure from Waitrose in Witney – despite my best efforts to be as authentic as possible!

“The Tudors loved a roasted peacock but that’s not on my menu! I found this recipe in a strange old cookbook called Harleian MS 279 – Potage Dyvers 123.

“The instructions were vague and the quantities even vaguer,” she laughs

“It is actually a very complex recipe which I love, and I am going to make my own almond milk to try and keep it authentic. What’s really interesting is that it is an odd combination of sweet and savoury and often the Tudors would have dishes like this on the table at the same time as a savoury and sweet course.

“The original recipe states that it is good with chicken or can be eaten as a dessert. It will look rather beautiful, although I have no idea of exact quantities or how long to cook it for! I will be doing lots of practice runs and I think the demonstration will be a lot of fun and should raise a smile.

“Plus, it’s something that everyone could have a go at making, especially at the moment with the abundance of lovely local strawberries available.”

This culinary extravaganza is only half the story, because Alexis and her partner, cameraman and sous chef Dan will be fully embracing the Tudor theme by wearing costumes that loaned to them by Past Times Living History.

“The costumes are stunning and mine is really ornate and absolutely extraordinary and beautifully beaded.

“I won’t be cooking in it because I am terrified, I will splash it with red wine or simmering almond milk and that would be a disaster, but viewers will get to see my outfit before I start the actual cooking.

“It’s a queen’s outfit and has eight elements to it, so when it arrived, I was sent clear instructions on how to put it on and which bit went on first. One of the best bits is a part called the bum roll which gives a bustle effect at the back – it’s a bit like a shelf so handy for keeping snacks on!”

“But I think the addition of the fabulous costumes will really make it”!

So how has Alexis, whose career started in marketing and promotions in radio broadcasting, found herself hosting a Tudor cookery demonstration dressed as Anne Boleyn? “Cooking and all things foodie have always been my great passion and in 2008 I took part in the BBC’s MasterChef programme. It was an amazing and terrifying experience and it gave me the impetus to change my life.”

Having started her career in commercial radio working for London station LBC, then Oxford radio station FOX FM and was soon doing the live traffic and travel reports from the station’s ‘Flying Fox’ helicopter: “What an experience that was, I still have a great love of helicopters, although not of reading the roads from 1500 feet up,” she remembers.

At Bauer Yorkshire she was responsible for six radio stations and a team of 85, but after taking part in Masterchef, she decided to leave radio and went on to study and gain her Cordon Bleu diploma.

Alexis then launched her own cookery school Dancing Trousers at her home on the Oxfordshire/Gloucestershire border gaining numerous industry awards along the way.

“I ran Dancing Trousers for ten years teaching everything from knife skills to patisserie for everyone from complete beginners to accomplished cooks, and from small groups up to parties of 20. My youngest customer was four and my oldest was 86!”

In 2018 Alexis started to wind things down and look for a new direction and was delighted to join OFA in February 2019.

And now you can see her in all her Tudor glory on Sunday July 5 at 11am at https://artsfestivaloxford.org/events/tudor-cookery-with-lexi

Full details of the 18 day festival can be found at www.artsfestivaloxford.org