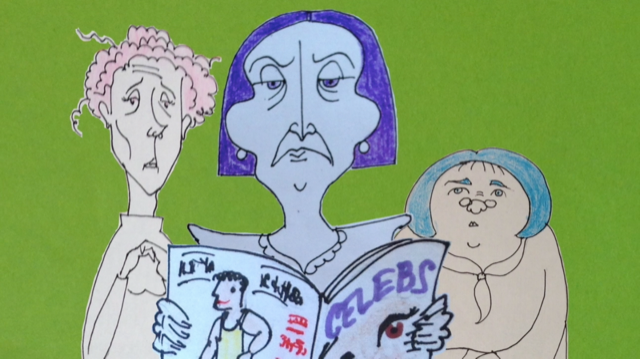 THREE STAGES is written about the sudden death of the mezzo soprano Rebecca Allison who died in 2016 after contracting sepsis.

“so many people have faced sudden bereavement this year, that I hoped three stages might resonate with some viewers”

Theatre founder Nia Williams was great friends with Rebecca, developing the piece after her death, and featuring Rebecca’s son, the singer Matthew Allison.

“So many people have faced sudden bereavement this year, that I hoped it might resonate with some viewers. And having Matt involved, and showcasing his beautiful voice, was the deciding factor. Becca would have been thrilled to see him perform,” Nia says.

Three Chairs and a Hat will also bring HAGS, to Online@theSpace festival, a short taster of Nia Williams’s new musical ‘Lady M’, and another glimpse into the company’s venture into animation.

Lady M is loosely based on Shakespeare’s iconic character Lady Macbeth, and tells the story of an online life coach with a dodgy past. HAGS features songs from the show, illustrated by cartoons and animations.

“This is a completely new direction for Three Chairs and a Hat, which we probably wouldn’t have explored if it hadn’t been for the constraints imposed by the pandemic,” says Williams.

Plans are now underway for a fully animated version of the musical, featuring actor Susanne Hogson and directed by Alice Evans.

The live version of ‘Lady M’ had been in rehearsals when the pandemic scuppered their plans, but Three Chairs and a Hat still aim to take it to Edinburgh in 2022.

“It looks like being a long wait before we can do live theatre again so the Online@theSpace festival has given us a chance to experiment,” explains Nia, who is also a pianist, musical director and associate artist of English National Ballet.

THREE STAGES and HAGS can be watched at http://online.thespaceuk.com and is available to view free of charge until the end of January.