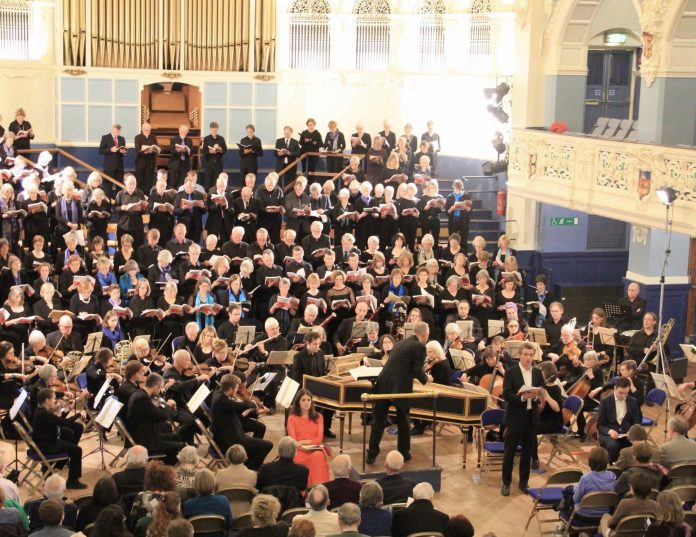 Mendelssohn’s magnificent oratorio Elijah comes to Oxford Town Hall at the end of this month.

It’s the latest Come and Sing event from Oxford Orpheus, which was established in 2012 by Leo Pitt and conductor Robert Dean to raise money for local and national charities.

As always, the singers and orchestra have come from far and wide, and they will have an intensive day of rehearsing before presenting the concert in the evening.

“Elijah is a very popular piece with a lot of singers, so it’s a good one to do if you haven’t got much time to rehearse,” says Leo. “There’s a lot for the chorus to do and it’s a very dramatic story, so it’s very exciting.

“Robert regards the whole thing as an opera rather than an oratorio, and he really brings out the story so it’s great fun to do.”

Leo has always been passionate about giving a platform to up-and-coming young singers.

“It’s a really good opportunity for young soloists who are beginning to take on some great roles for the first time,” she says. “Robert’s very interested in teaching young singers, so it’s a great chance for us to showcase their talent. We love doing it – giving them a boost is very important to how we run Oxford Orpheus.”

Three of this year’s soloists may be familiar to local audiences. Mezzo-soprano Ema Nikolovska was one of the Oxford Lieder Festival’s Young Artist Platform winners last year (with pianist Gary Beecher), while soprano Catriona Hewitson and tenor Liam Bonthrone were both Alvarez Young Artists at Garsington last season.

They are joined by baritone Dominic Sedgwick, who has recently been singing with Royal Opera, Glyndebourne Festival Opera and the Orchestra of the Age of Enlightenment.

The purpose of the concert, of course, is not just to have fun but also to raise money. For the third successive year Oxford Orpheus will be supporting the Christ Church Cathedral School’s Community Outreach Programme, which takes choral singing workshops into local primary schools.

For the first time, the event will also be supporting Beating Time, a national charity that sets up choirs in prisons with the ultimate aim of helping those who have served time to find work when they are released.

It’s a project that Leo believes fits perfectly with the ethos of Oxford Orpheus.

“One of our purposes is to enable people to enjoy the benefits of singing together,” she says.

“I once went to a performance of West Side Story by Pimlico Opera at Bullingdon jail where they involved the prisoners, and I thought it was the most inspiring thing to see.

“Then I wondered whether anybody else was doing that kind of work, because it seemed to me that people in prisons really need that kind of help and input. It’s so life affirming, and singing can really help people’s self-esteem and self-confidence.”

A search for organisations working in prisons led Leo to Beating Time, which was founded in 2014 by former lawyer and community choir singer Heather Phillips.

Heather was driven by concern for prisoners’ mental well-being and by the proven physical, psychological, emotional and social benefits that come from singing in a choir.

“We are a very effective mental health intervention,” she says. “The thing I love about a choir is the structure it gives to your life. It’s a habit. And it’s a really positive habit. Choirs rehearse, and they rehearse every week.

“We’re in eight prisons every week, so we run eight sessions a week, for 50 weeks of the year. “We also do concerts because, like any other choir, you need a goal. We sing at everything – Black History Month, LGBT Day, Holocaust Memorial Day, VE Day, Christmas, Hanukkah and prison funerals.”

Fundraising is an ongoing problem, as Heather explains: “Raising money is difficult given that we’re dealing with adult, healthy men. We’re not cancer, we’re not animals, we’re not children, we’re not education – all our people are architects of their own downfall, so we are the absolute bottom of the food chain when it comes to funding. It puts a serious constraint on how much we can do.”

Hopefully, next week’s Elijah will help raise some vital funding. “We hope people will come along,” says Leo. “It’s very important people support us, but also that they come and enjoy themselves and hear some really terrific music.”

Mendelssohn’s Elijah is at Oxford Town Hall on Saturday 29th February at 7.30pm. For further details and booking, visit www.oxfordorpheus.com

To find out more about Beating Time, visit www.beatingtime.org