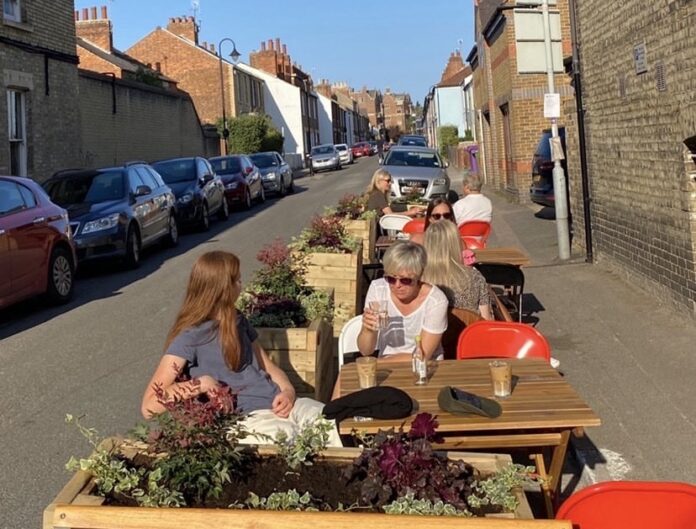 The streets of Oxford and Jericho are taking on a more continental feel as restaurants, pubs, bars and coffee shops set up tables and chairs outside their premises.

The new seating areas have been introduced to support hospitality businesses without sufficient space indoors, to enable them to open on a commercial basis while maintaining social distancing.

Traffic has also been prohibited at set hours, to keep pavements free for pedestrians to socially distance.

So far, the initiative includes tables and chair areas in Cornmarket Street, George Street, the new partly pedestrianised section of St Michael’s Street and even in Jericho.

Read our story about the businesses in St Michael’s Street here.

Jericho Cafe owner Ruth Dorso said: “We applied for a street licence to allow us to put tables and chairs on the street in June, and we’re absolutely delighted with the end result.

“We had only very limited outside space – two tables – until now so this is a very important lifeline for us.

“Now all we need is the sun to stay out so that people can enjoy the space!”

George Street has also been closed to traffic to enable the new scheme, attracting appreciative customers enjoying the sunshine this weekend.

The road closure, between New Inn Hall Street and Cornmarket Street, will provide space for outdoor tables and chairs for around 11 hospitality businesses between 10am and 9pm, as well as a two-way cycle lane.

The pedestrianisation will be run as a trial until September 20.

The City Council is only able to pedestrianise George Street now because there are relatively few vehicles travelling through Oxford city centre at the moment compared to previous years.

The changes are part of a wide range of measures – including free parking at Oxford’s park and rides – to support businesses in Oxford city centre.

Other George Street businesses may join the outdoor dining space in the future.

The road closure will be lifted at 9.30pm each day, providing businesses with half an hour to clean up and move the planters aside before traffic resumes in George Street.

Councillor Tom Hayes, Deputy Leader, and Cabinet Member for Green Transport and Zero Carbon Oxford, said: “We need to back businesses and people’s livelihoods in the toughest economy we’ve known for years.

“The hospitality sector is a key part of the city centre’s economy and we want to support the industry to bounce back and turn a profit. Our support for outdoors, on-street tables and chairs is a practical way to help businesses serve more people while keeping them apart because of social distancing guidance.

“Our aim is to create a city centre that people feel safe visiting and consciously want to enjoy, and increased pedestrianisation, fewer vehicles clogging up narrow medieval streets, and cleaner and livelier places are critical to achieving that aim.”

Adrian Campbell-Howard, Owner of Society Café Ltd in St Michael’s Street, said: “We’re absolutely delighted with the support from Oxford City Council at this time. They have part-pedestrianised St Michael’s Street to enable us to safely put out some lovely seating in front of Society Café. It’s wonderful to see the street come alive with cafe culture and people enjoying the unique spaces that this beautiful city has to offer.”

A new zone for tables and chairs in Cornmarket Street, was installed outside The Plough at 38, in July. The area, which operates between 10am and 6pm, is temporary until 4 October but could be extended if it proves successful.

An area for tables and chairs has also been created in Broad Street, near The White Horse pub and Blackwell’s Bookshop. The famous bookshop plans to create an outside seating area for its café, while the pub will be able to open for the first time since lockdown started.

The White Horse, which opened on August 7, is too small inside to operate commercially while maintaining social distancing, without the possibility of using the external space.

To create the area, the City Council secured permission from the County Council to move two disabled parking bays further along Broad Street to the west.

The City Council – supported by the County Council – has also helped Jericho Coffee Traders and The Grand Café to install tables and chairs on the pavement in High Street.

The councils are also working with businesses in Magdalen Street, Friars Entry, George Street and other locations around the city to install further pavement seating areas.

It will only be possible implement similar pedestrianisation schemes in George Street in future if the overall level of traffic is reduced in Oxford city centre. The City Council and County Council have just completed a public consultation on proposals to introduce further bus gates into Oxford city centre to achieve this. 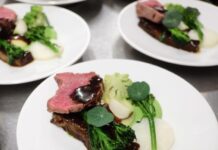 REVIEW: Pop up fine dining has become the ‘new normal’ as we try out Nood Ltd at Jericho Cafe

REVIEW: Date night dining at The Feathers in Woodstock is “right up there with the best”