Digital is where it’s at this year for performing companies, and many have come up with some wonderfully imaginative projects, certainly in the world of classical music.

One of the latest is Opera Anywhere’s set of digital projects based on four of their most popular productions – Humperdinck’s Hansel and Gretel, Menotti’s Amahl and the Night Visitors, Gilbert and Sullivan’s The Mikado and Puccini’s Sister Angelica.

The projects are intended to promote Opera Anywhere’s work and also develop educational resources for teachers.

“The Hansel and Gretel resource is an online digital book, based on our production, with illustrations by James Mayhew,” explains Mike Woodward, who founded the Sunningwell-based company with wife Vanessa in 2000.

“It’s a very children-orientated book, which not only tells the story but also on each page there’s a voice clip from our performance. It’s truly amazing.

“We’ve done something very similar for Amahl, and our Mikado resource has animations in it and a set of instructions on how to make Mikado puppets.

“Then some of our Puccini ladies have put together a lovely 15-minute video resource to help promote our Puccini next year.

“They’re all on our website, and it’s put us in a good place for next year.”

“we were performing in 55mph winds, but the audience had been starved of live performances so they were determined to stick with it”

The new resources were made possible by grants from the Arts Council’s Culture Recovery Fund and the Oxfordshire Enterprise Local Partnership (OxLEP), for which Mike is extremely grateful.

“We’ve had 60-odd events this year we haven’t been able to perform,” he says. “We wanted to keep some of our freelance performers busy and have some money to pay them.

“Together these two grants have enabled us to employ some of our performers who have other skills, including online and filming skills, so we were able to develop a new website and the four new online resources.

“Obviously we’ve lost a lot of ticket sales this year, and a lot of our freelance performers have been absolutely hammered, but thanks to the grants, as an organization we’ve been able to keep our heads above water and in fact put ourselves in a stronger position for next year.”

Despite the Covid restrictions, Mike and Vanessa have been able to take Opera Anywhere productions on tour to outdoor venues over the summer – including a very memorable experience at Brighton Open Air Theatre.

“We did a couple of performances of The Mikado and The Magic Flute,” Mike recalls, “which we were able to do because they were very well organized with social distancing, and they had all the authority they needed from the local council to enable that to happen.

“One of our Mikado performances was quite extraordinary. Although it was August, we were performing in 55mph winds, but the audience had been starved of live performances so they were determined to stick with it.

“Things were flying around all over the place, trees were looking as if they were about to come down around us, and the theatre was threatening to pull the show because it was all looking a bit dodgy, but we got through it. It was an incredible experience!”

A slightly less dramatic experience, but nonetheless exciting one, was taking part in the Thame Arts and Literature Festival (TAL).

TAL decided early in the year to put this year’s event online, and Opera Anywhere – a regular at the festival – was invited to perform excerpts from favourite operas at various locations around Oxford, resulting in the film PJs to DJs.

The film features a variety of operatic and musical theatre favourites, from O Sole Mio and Offenbach’s Belle Nuit to You’ll Never Walk Alone and Somewhere Over the Rainbow, all performed at famous Oxford landmarks such as the Sheldonian Theatre, Radcliffe Camera, Carfax Tower, Bridge of Sighs, Bodleian Library and Cherwell Boathouse. Watch it here: https://youtu.be/iB90tMaZ2tE

“It was absolutely fantastic to be part of that,” says Mike. “We had an amazing, top-of-the-range film crew and they produced the film and sold tickets for it.

“It was great fun, a really nice bonus in a potentially grim year and a lovely, lovely thing to have been involved in.”

The pandemic has had a devastating effect on the arts industry, but Mike is surprisingly upbeat.

“One of the benefits of not touring so much this year is that we’ve been able to gather some new enthusiasm and energy, and plan properly rather than rushing around,” he says. “We’re absolutely determined to move on, get stronger, be better.”

Mike is now looking ahead optimistically to 2021. Shows postponed from this year have been rescheduled for next year, and Mike hopes that rehearsals can start in April with a view to restarting touring in May.

The company will be touring eight productions, including its flagship G&S shows, The Mikado, The Pirates of Penzance, HMS Pinafore and Patience, which will be promoted as G&S Festival on Tour.

“We’re trying to persuade our venues to take all four G&S shows in one weekend,” explains Mike. “We’re trying to make up lost ground, and hopefully cram four performances into three days.”

Future plans include a long-held ambition to add Iolanthe to the company’s G&S canon, as well as tackling Britten’s Albert Herring, a particular favourite of Mike’s.

“It’s going to be a tough sell, but I’m desperate to do it,” he says. “We’re going to need some serious funding to do that, but I’m so keen on it – it’s such fun, and it’s such an eye-opener for people who haven’t seen much of Britten. It’s fantastic.”

Mike also hopes the online projects will help to develop educational projects in schools – something for which he and Vanessa have always had a passion.

To find out more about the online projects, and to watch the videos, visit https://operaanywhere.com/online-projects/

For more information about Opera Anywhere, and to keep an eye on upcoming events, visit https://operaanywhere.com/ 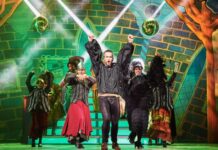