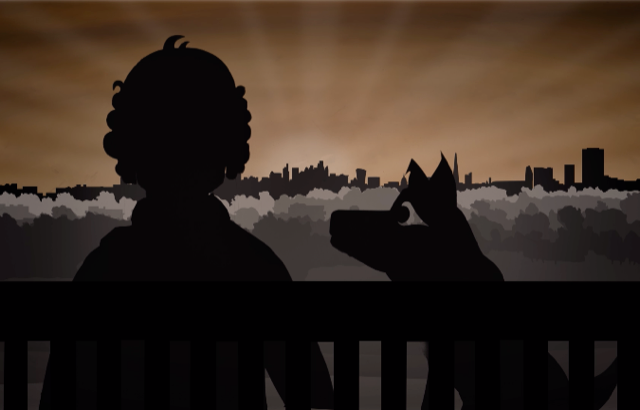 Vaughan Williams’ On Wenlock Edge – his famous setting of A.E. Houseman’s poem from A Shropshire Lad – has been given a stunning new makeover.

The animated shadow-puppet film of this evocative song cycle by puppeteer Jeremy Hamway-Bidgood, was unveiled at D’Overbroeck’s School with live performances by Daniel Norman (tenor), Sholto Kynoch (piano) and the Brodsky Quartet.

The film was then given another airing during the Oxford Lieder Festival, with the same performers.

Now, for the first time, the film is available on YouTube – but only until 15th May, so make sure you tune in!

The project was a dream come true for Daniel Norman, who first conceived the idea more than ten years ago.

“I just love the cycle,” he says. “It’s one of my all-time favourite pieces. It’s such visual poetry, and the music is very filmic.

“I grew up in Shropshire before I moved to Oxford, so it’s my world. It talks about the hills I was dragged up when I was a kid. The music and poetry have always been close to my heart.”

Daniel managed to secure funding from the Arts Council for the project, and gradually his dream become a reality.

The idea stemmed from his determination to open up song to a wider audience, and to demonstrate that you don’t have to go to a formal concert to hear songs being performed.

“I absolutely love singing songs; it’s a big part of what nurtures me artistically,” Dan says. “I’m frustrated with the concept that the song repertoire is difficult to listen to. There’s something about song that puts people off. I talk to music societies and they say they find song concerts really hard to sell.

“I’ve done various things over the years to try to find ways of presenting songs in a non-stuffy way. So that was the starting point for this idea – to get people to come to something where they’re experiencing the songs while doing something familiar, like watching a film. And it’s really grown from that.”

Choosing a film animator to work with was no problem. Jeremy Hamway-Bidgood’s animated film for Schubert’s Erlkonig, created for the Oxford Lieder Festival’s Schubert Project in 2014, became a YouTube sensation (watch it here: www.youtube.com/watch?v=JS91p-vmSf0), so he was the obvious person to help bring Daniel’s vision to life.

Between them, Daniel and Jeremy conceived a through-story for the song cycle, in which the main character, Edward, looks back on his youth and the days spent in Shropshire during the First World War. He is clearly still troubled by his memories and the somewhat complicated relationships he left behind.

“We wanted it to reflect Houseman in some way,” explains Daniel. “He wrote a lot of the poems in London, and here’s this guy in London looking out from Primrose Hill, perhaps, or Hampstead Heath, where Houseman wrote poems.

“It reflects Houseman’s homosexuality, which was a driving force for the themes of lost youth and lost young men.”

Daniel was thrilled to get Sholto Kynoch and the Brodsky Quartet involved.

“Sholto and I go back a long way. He totally understands the need to keep finding new ways of presenting things, so he didn’t need much persuading!

“I’ve seen the Brodsky Quartet many times and I’ve always loved what they do. I like their refusal to fit into the normal concert mould, and the fact that they’re prepared to do things outside the box. They all are totally invested in it, so it’s been a great partnership, really fruitful.”

Daniel hopes that there will be many more live screenings of the film, but in the meantime don’t miss the opportunity to see this extraordinary piece online. Visit www.oxfordlieder.co.uk/event/1168 for the YouTube link and other information about the film.