Famous singer Nile Rogers appeared on social media this morning to confirm that he will be headlining The Big Feastival next year over the August Bank Holiday weekend.

Having been due to appear at the Kingham festival this summer, which was then cancelled due to the pandemic, the headline acts of Nile Rodgers, Sigala and Rag’n’Bone Man will be appearing next year instead.

On Instagram and Twitter this morning the famous soul and disco singer, who graced Blenheim Palace’s Nocturne stage last year, said: “I am thrilled to be performing at The Big Feastival on the August bank holiday 2021 with my band Chic.

“I know there will be lots of disappointed people because we have to wait yet another year to freak out on the farm but we promise we’ll have good times and we’ll be even sweeter. Stay safe and see you next August.”

Rodgers will be headlining on the Saturday night (Aug 28), with Sigala kicking off on Friday (August 27) and Rag’N’Bone Man closing on Sunday (August 29).

Nile Rodgers, the American guitarist, singer-songwriter, record producer, arranger and composer is the co-founder of the funk group Chic.

Rodgers has written, produced, and performed on 500 million albums and 75 million singles.

The Big Feastival organisers, headed up by Blur’s Alex James, who will be hosting the Oxfordshire festival on his Kingham farm, said:

“We are so pleased to announce that all our headliners from this year’s line-up are confirmed to perform in 2021!

“We will be releasing the full 2021 line-up in the coming months, so keep checking back for a weekend full of good music, good food and good times.” 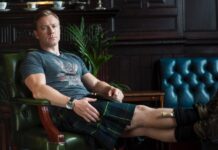