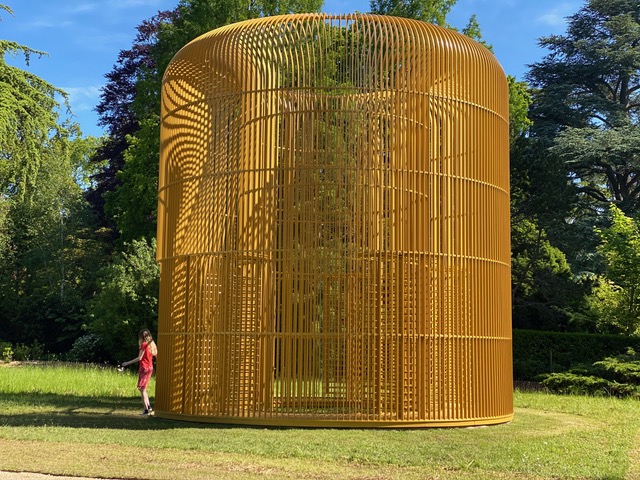 Visitors can walk inside the gold metal structure, walk through a series of turnstiles situated around the edge of the cage, stand in the centre or experience it from the outside looking in.

“This piece addresses the refugee crisis across the world and is very much a symbol of the times we are just coming out of now, we have all been confined in our cages”

Gilded Cage, created in 2017, addresses the international migrant crisis, and highlights the physical and ideological constraints of life as a refugee. It also marks the artist’s return to Blenheim after his landmark exhibition at the Palace in 2014, when he was still under house arrest in China.

The golden cage artwork, temporarily installed in the gardens of the palace, was originally shown in New York in 2017 as part of a global migration campaign.

Ai Weiwei says: “Blenheim Palace is the most proper setting for this work to be shown”

Michael Frahm, Director of Blenheim Art Foundation, said: “We are very happy and excited to have Gilded Cage here and while he is currently in Lisbon opening his major European exhibition, he has promised to visit Blenheim soon.”

As for hosting Gilded Cage in Woodstock, Ai Weiwei says: “Blenheim Palace is the most proper setting for this work to be shown. The work itself is a commentary on fences and borders. As we can see, the world today encounters new possibilities while being challenged by unthinkable crisis at the same time. To rethink our humanity is crucial for human development.”

Michael added: “Ai Weiwei grew up in a very difficult situation in China. His father was imprisoned as part of the cultural revolution and growing up was tough. When he could leave, in the 1980s, he decided to go to New York and was influenced by western art and felt he had a responsibility to engage with human rights issues and other situations which China was trying to keep under wraps.”

In 2011, Ai Weiwei was arrested and detained for 81 days without charge. His passport was kept for four years which meant he could not visit Blenheim during the last exhibition of his work at the palace.

He has emerged as a vital instigator in Chinese cultural development, an architect of Chinese modernism, and one of the nation’s most vocal political commentators.

Michael added: “He really is an incredible, creative voice and Gilded Cage was created as part of a collection of 300 works for a project in New York. This piece is the most significant and addresses the refugee crisis across the world. It is also very much a symbol of the times we are just coming out of now, we have all been confined in our cages. Ai Weiwei has no fear of controversial projects and holds a mirror up to the world we live in, using his voice to raise important questions.”

For more information go to: https://www.blenheimpalace.com