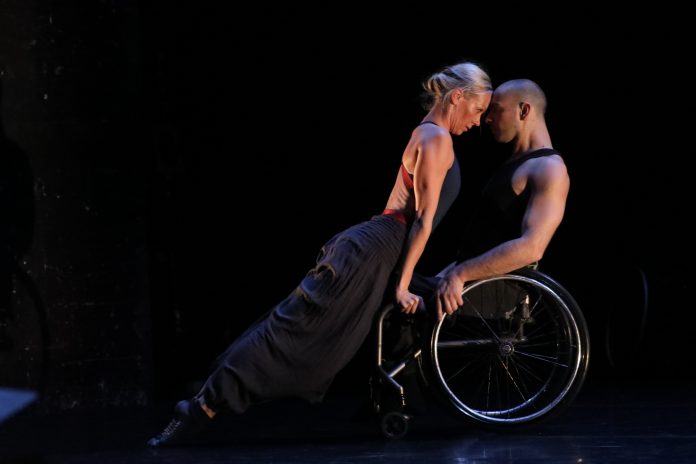 After a successful run at this year’s Edinburgh Festival Fringe, the team behind 111 – American dancer Joel Brown and Estonian dancer Eve Mutso, make their Oxford debut tomorrow at the IF Oxford Science and Ideas Festival.

111 is a powerful duet between two exceptional dancers, which explores their different strengths and vulnerabilities.

It is based on the number of vertebrae that, hypothetically, they believe they have between them.

Eve moves like she has a hundred and Joel’s spine is fused and jokes that he only has 11. (Note: there are 33 vertebrae in the spine).

Joel is a paraplegic dancer, self-trained and currently dancing with London-based dance company Candoco – the UK’s leading company for disabled and non-disabled dancers. Eve is a freelance dancer and choreographer and former Principal Dancer of Scottish Ballet.

So how did this dance collaboration between the USA and Estonia happen? Joel Brown and Eve Mutso first met in 2015 when Scottish Ballet, Indepen-dance, Scotland’s inclusive dance company and Marc Brew Company were researching new work.

From the first time they danced together, there was an instant rapport and desire to test and challenge how far they could push each other to create something special.

At the core of this dynamic collaboration is the element of trust, not just in their creative relationship but in what they demand of each other physically in the performance.

For example, Eve had to become an expert in aerial work that Joel wanted to explore in the piece. In doing so, she conquered her fear of heights and learned how movement worked in the air rather than on the ground.

111 evolved and changed over a long period of time and development, with both dancers open and happy to share their journey proces with industry professionals who proved to be invaluable as ‘outside eyes’ in its creation.

So what can Oxford audiences expect from 111? A soundtrack that uses music from Penguin Cafe Orchestra, Dawn of Midi, Julia Jacklin and Radiohead.

Eve Mutso says: “It’s about our curiosity in how we can explore movement coming from such different backgrounds and techniques, and then developing a movement language which combines our own abilities and experiences, while also pushing our weaknesses to the next level.”