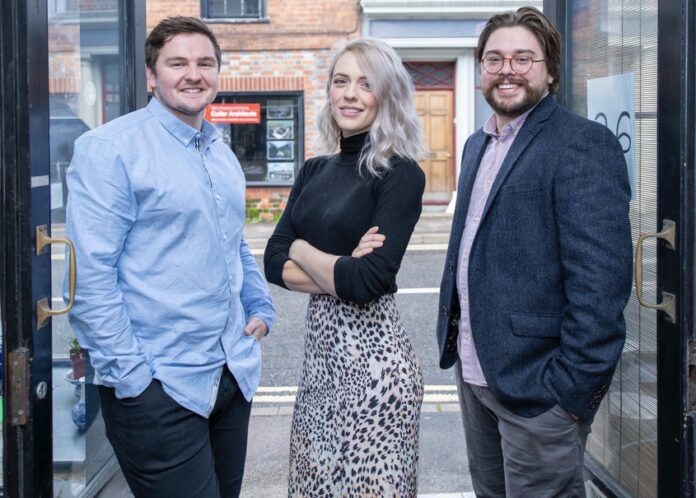 An exciting new bar and restaurant Five Little Pigs is set to open in leafy Wallingford this spring, just down the river from Oxford.

“There are plenty of reasons to halt opening a new bar or restaurant at the moment, and frankly this doesn’t bother us too much at all. Our industry has always had its challenges, but there will come a time, hopefully soon, where people will venture out to eat and drink again. We want them to do it with us,” Aimee muses.

“It’s been so galvanising to see in black and white, how much our community have our back. And we can’t wait to deliver”

And it’s all thanks to the local community who backed them with all their might – raising a staggering £50,000 towards the new bar and restaurant in a Kickstarter campaign.

“It’s been so galvanising to see, in black and white, how much our community have our back. And we can’t wait to deliver on that,” Aimee says.

The trio are no strangers to the game: Rob and Sam opened ‘The Keep,’ in Wallingford just over five years ago, an intimate craft beer & gin bar, as well as launching their own gin label, Albino Flamingo, last year.

The local community has backed them with all their might – a £25,000 Kickstarter campaign was reached in three days, and now stands at a staggering £50,000

So it was only a matter of time before they turned their sights to a bigger project.

Enter Aimee – the chef component of Five Little Pigs – and co-owner of award-winning High Wycombe restaurant Lata Lata. “Aimee used to rock up to the bar on a Monday, with a stack of notebooks and recipe books, to write her menus,” recalls Sam.

“After a couple of years getting to know each other, and our respective businesses, it was obvious we all had something to give to a shared project. We love what we do, and the idea of doing something big, together, was too good to ignore,” he explains.

The obvious hurdle? A global pandemic which meant the hospitality industry ground to a halt. “Some people thought we were insane when we said we were going for it,” says Rob, “but because of the pandemic, people have a greater understanding of how important a thriving local community is, so we knew we’d have the backing of the town.”

When the perfect venue came up in Wallingford, it seemed foolish to wait – the former Chinese restaurant Ginseng fitting the bill exactly. “It’s the perfect location with some amazing outdoor space and a good sized kitchen. It’s light and bright…. we fell in love with it,” Aimee says.

And the local community backed them – the ambitious £25,000 Kickstarter campaign reached in a mere three days, and currently stands at a staggering £50,000.

So so what can we expect from Five Little Pigs? Unsurprisingly, there is a strong focus on local – the meat, the veg, the booze, even the build is capitalising on a huge wealth of local suppliers, artisans and trades, and the owners wouldn’t have it any other way.

“What was also really important to us was providing a space that’s comfortable for everyone, with a nicely designated bar area for those who just want a couple of drinks, more intimate dining for those looking for the full works, and a light, relaxed space at the front for a more casual experience. We want people to come in feeling comfortable, and leave feeling wowed,” Aimee adds.

Aimee’s menus showcase seasonal produce, putting suppliers and their produce at the fore. “It’s the only way I work, to be honest. I don’t like to over complicate the food, and when you’re surrounded by stuff this good, it just isn’t necessary. The ingredients do the talking.”

Think eclectic cocktails, bar snacks such as fried olives with oregano, capers and lemon stuffing or patron peppers, all day dining dishes include pig cheeks with Witheridge croquettes or potted mackerel with pickled cucumber and horseradish, and puds such as house doughnut with seasonal jam and cinnamon sugar!

Doors are set to open, with the easing of restrictions, this Spring, so watch this space!