“It’s so important to have opportunities for laughter when the world feels grim,” observes Ed Scrivens, one half of the improvised comedy duo Dragprov.

As Eaton Messe, alongside co-conspirator Francesca Forristal (aka drag king Christian Adore), Dragprov’s Oxford-grown brand of lightning-quick, family friendly improv, with generous lashings of glamour, has become a massive hit, both here and across the country, scooping up several comedy awards and nominations along the way.

If you haven’t seen them yet, now’s your chance, because the spicy duo are bringing their new improvised musical The Dragprov Revue to Oxford Playhouse live, for a Covid-safe show.

“I’M IN IT FOR THE FABULOUSNESS AND THE WITTICISM, WHICH I THINK THE ANCIENT EGYPTIANS WOULD HAVE APPRECIATED”

So what can you expect? Christian Adore and Eaton Messe will improvise a tuneful medley right in front of your eyes using your suggestions by creating dazzlingly vibrant cabaret, from Broadway songs to sketches, and spontaneous freestyle raps.

With an age guideline of 16+ expect an uproariously wicked show, or as they describe it themselves “RuPaul’s glamour meets Whose Line Is It Anyway” and plenty of glitter!

So how did Ed get into the drag world? Having just completed a PhD in Egyptology at Oxford University, he says: “I suppose I’ve long been interested in femininity, how we live it or depict it, and what that means, so my life as a performer and an academic have always run in parallel.

“I often like to say that I research goddesses, and that sometimes I am one,” he says grinning.

Not that it’s been easy at the moment. “No,” Ed agrees. “Dragprov sits on the overlap of several worlds: the drag scene, comedy, cabaret, etc, and all of them have been hit very hard by the Covid crisis.”

“Luckily the Playhouse and Jericho Comedy have worked tirelessly to provide that space while keeping everyone protected.

“But let’s not get too bogged-down, I’m mainly in it for the fabulousness and the witticism, which I think the ancient Egyptians would have appreciated.”

Dragprov LIVE performs from the Oxford Playhouse on Saturday November 7. Tickets are available at http://www.dragprov.com/ 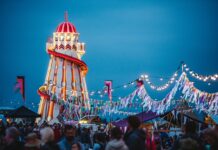 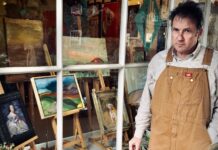