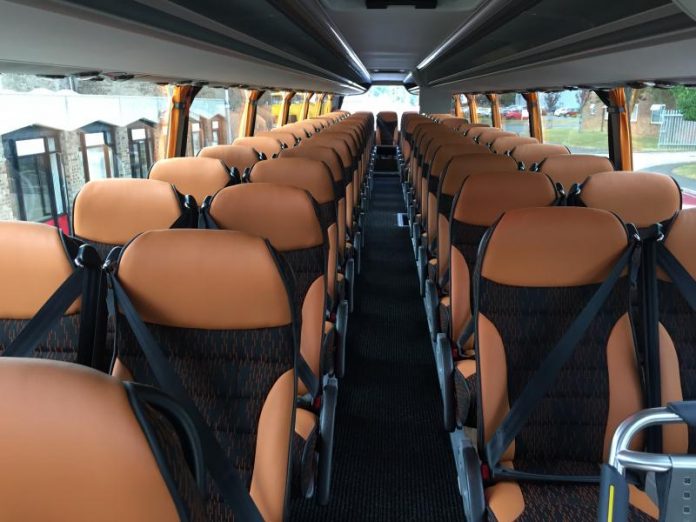 “For me a coach is the dream venue for a comedy show; with tightly packed seats, an on board PA and adjustable lights it seemed like the perfect setting for a high speed mystery,” Jericho Comedy’s Harry Houseman tells me.

Even so, the Oxford comedy troupe’s latest venture Murder on the National Express is madcap, fun, exciting, daring and novel. The only question being, why hasn’t someone done this before? And can I come?

The show is a murder mystery on a moving bus, where a murder has taken place on a replacement bus service – a parody of modern transport woes.

“There seemed nothing more amusing than the idea of a murder being foiled not by a sleuthing detective, but by the limitations of modern transport, a murder having to take place on a replacement bus is inherently ridiculous, self deprecating and very English,” Harry continues, “with all the benefits of the closed quarters and a limited pool of suspects as a train with the heightened ridiculousness of a replacement bus.

Having already performed the show twice to packed out crowds with a great response, Jericho Comedy is delighted to bring the show back to Oxford tomorrow (Tuesday night).

So why a bus? “Over the past three years Jericho Comedy has been experimenting in site specific shows across Oxford, i.e. shows in non-traditional performance spaces, from court cases in courthouses to funerals in real churches, stand-up about literature and Harry Potter shows in bookshops,” Harry explains.

“Although no performance space could be as site specific as one capable of moving from place to place. A coach is one of the few venues you can drive around to any location.”

And yet doesn’t that come with its own sense of problems? Exactly, trains planes and buses are an enclosed space with a sense of claustrophobia, uncomfortable proximity to strangers with several good justifications for why people can’t leave,” Harry says with glee, “with the added intrigue of actually being on board a real moving coach.”

But then as Harry points out, Oxford is the dramatic backdrop to many murder mystery stories, from Inspector Morse, Endeavour and Lewis, to Antonia Fraser, Death on the Cherwell.

“It seemed only right then that Oxford, a city with a rich literary past, would make the perfect setting for a modern live murder mystery show,” Harry concludes.

Murder on the National Express rolls into Oxford on February 4 at 7pm and 8.30pm. Meet in St Giles, Oxford. Additional shows are being performed in Bicester on Feb 21 Aylesbury on March 20. Tickets can be bought at www.jerichocomedy.com