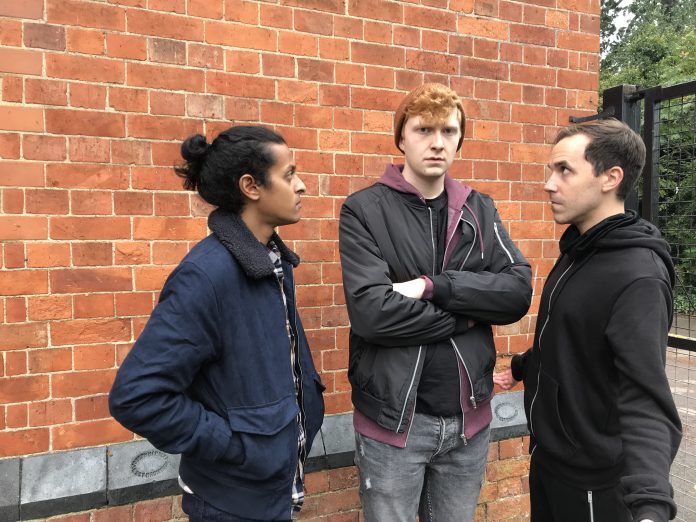 ‘Corrosive, at its heart, is about a teenage friendship, the kind, that at the time feels as though it will be everlasting and unbreakable,” its playwright Karim Khan tells me.

“Except, it can’t last forever and is susceptible to break when the political climate is fraught with tension.”

“As a writer, I’m increasingly aware of the power of my words, as well as the danger and risk they hold”

Corrosive depicts Riz and Jack, who are classmates, band members, friends. Their names are etched on the bench they meet at every week. They go there to write new lyrics and to tell each other everything…or so Jack thought. What happens when trust is broken, a friendship is in jeopardy? What happens when the real poison lies where you least expect it?

“Corrosive explores the fine lines between fear and anger, terror and hate, and addresses the themes of radicalisation, scaremongering and peer pressure in today’s society, through the prism of a creative teenage friendship,” he explains.

“As a British Pakistani Muslim, I feel as though I’ve always belonged to multiple groups and no group at all”

Weaving original songs throughout, this engaging and challenging piece charts the journey of two teenage boys and how each decision made has the possibility of leading to a dark and terrifying conclusion.

So why involve music? “A huge theme in Corrosive is the inherent power of language to create and destroy,” Karim adds. “The characters are musicians. Jack is a lyricist and Riz is a singer. The kind of lyrics Jack writes will transform over the course of the play.

“As a writer, I’m increasingly aware of the power of my words, as well as the danger and risk they hold, and as an artist, I have to use my words carefully and assess what function they are playing in the piece I’m writing.”

As supposed to what? “If you look at the way some politicians and journalists use words, it’s frightening to see the manipulation and calculation used to forward particular agendas. Slogans like ‘taking back control’ and ‘make America great again’ are banded around, but no one is really prepared to deal with the dangerous consequences,” Karim explains.

“Another theme is belonging. Every human being is hardwired to belong. And you’ll see this play out at the forefront of Corrosive. As a British Pakistani Muslim, I feel as though I’ve always belonged to multiple groups and no group at all.”

“Pegasus opened my eyes to the beauty and magic of theatre and was the catalyst for my writing journey,” Karim remembers. “Then a couple years ago I was invited in by Corinne Micallef the current artistic director, for a chat. She wanted to support me as a writer, which felt unusual because you rarely find a theatre willing to support and help you develop as an artist, and I became a SPARK artist.”

So why does he want to appeal to a younger audience? “I think the way theatre is introduced to children and young people at schools can sometimes appear boring and unappealing. At university I felt I could create theatre as radical and bold as I wanted it to be. That’s what I’ve always loved about theatre.”

As for creating Corrosive, Karim says that it was only by talking to young people that he gained greater insight to their modern day worries and experiences: “We had some workshops with some local drama college students.

“It was a great opportunity to understand the kind of things that matter to teenagers today. I wrote an outline for the story of Corrosive, and realised I wanted to do something different with this play. I wanted it to include songs and spoken word because I had never tried that before, and it felt like a fun and innovative way to tell a story.”

Whilst touring schools, there is a special preview event at Pegasus on Friday October 25 in this Pay What You Can Performance.  pegasustheatre.org.uk