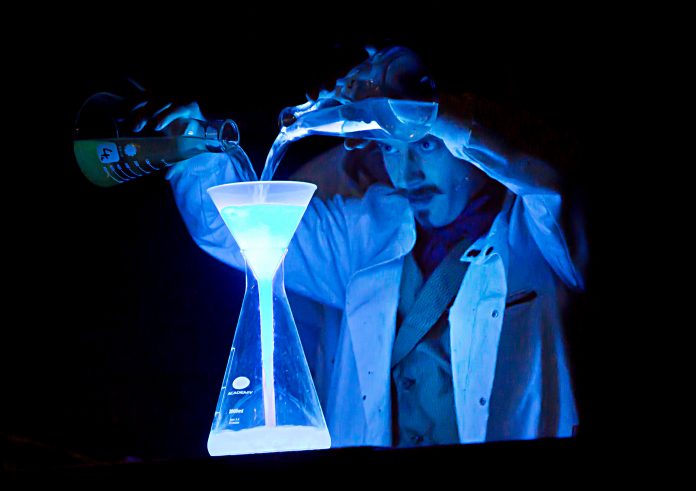 While performing their new show Unbelievable Science at the Edinburgh Fringe (where it was nominated for the Primary Times Children’s Choice Award), one of Morgan & West’s chemistry experiments went off a bit early.

“By that, I mean we’d got some water where it shouldn’t have been and as a result there was a small explosion in Mr. West’s hand.

“Thankfully it was short lived and he only had a few minor burns – had he not been wearing his safety goggles it would have been a different matter!” Rhys giggles.

“Since then we’ve rechecked the procedure for everything dangerous and altered that one slightly to ensure that can’t happen again. But what a day that was!”

It seems a long time ago that Rhys Morgan and Rob West were studying science at Oxford University. But with their new tour about to commence at Pegasus Theatre on Friday and Saturday, these two local lads have come a long way.

“What we were actually doing was using our degrees as a rather paper-thin cover story to be involved with as much theatre as we could,” Rhys admits.

“We first met in a production of Terry Pratchett’s Wyrd Sisters and bonded over a love of Eddie Izzard and Look Around You– a cult tv show which parodied the old Open University videos we’d all watch in science lessons in school.

“It wasn’t long before we were writing musicals and other shows together and eventually we decided to form a double act.

“We both had a passing interest in magic and so made that our focus. The rest, as they say, is history…”

It certainly is. Having appeared on Penn and Teller: Fool Us (ITV) in the summer of 2011, where they fooled the eponymous Las Vegas magic duo, they had to draw a line under their newfound teaching careers and chose performing instead.

“We spent the next eight years touring the country, and indeed the world, with our magic shows,” Rhys says.

A big decision then? “Enormously terrifying actually. At the time, we had done two runs of magic shows at the Edinburgh Fringe and were also doing small shows in village halls the length and breadth of the UK. We would go into St Alfred’s in Wantage, where we were science teachers, completely exhausted having been performing in Cumbria the night before. So it was the right thing to do.”

Presumably their new show Unbelievable Science is a hybrid of these two universes then; science and magic? “Absolutely. Science education has always been an important part of our lives, starting with fantastic teachers at school, through our degrees, and into our (admittedly brief) teaching careers.

“We’d been searching for a way to come back to this through our shows and finally decided to take the plunge, put down the deck of cards and pick up the test tube rack.

If you think this all sounds a bit earnest then fear not, because Morgan & West couldn’t be serious if they tried.

“Yes, we are known for our rather irreverent and fun approach to magic, so it’s time to carry that same sense of silliness over to science,” Rhys explains.

“We want to show people that science is fun, so Unbelievable Science is a big, flashy, fun, silly, over-the-top extravaganza for all the family to enjoy together,” he promises.

“Plenty of explosions, live experiments, lightning on stage, optical illusions, and a whole host of nonsense blend into the more serious side of what scientific method is all about and why scientists do things the way that they do.”

Presumably their much-loved Victorian wardrobe will make an appearance as well? “We love dressing up, and what better excuse to wear frock coats, double breasted waistcoats, and brightly patterned cravats than Victorian fashion?” Rhys asks.

“The facial hair it affords you is pretty fun too. We were also very much influenced at the time by the golden era of magic, when the line between conjuring and reality was blurred – and it’s excellent fun to play characters on stage who are a little larger than life.”