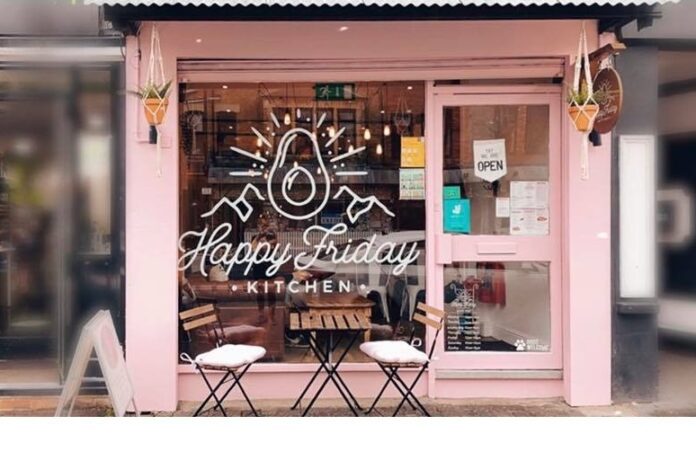 When Lola Dixon first opened Happy Friday Kitchen on Cowley Road in 2017 she wasn’t sure of its success.

Vegan food was yet to have its renaissance, and while she’d fallen in love with Californian comfort food on her travels across America, was East Oxford ready for her take on hand-stretched pizzas, burgers, tacos, burritos, nachos and milkshakes?

“People are definitely more open to vegan food now, and many of our regular customers aren’t vegan themselves”

Yes is the short answer, and her loyal fans and followers have been flooding to Lola’s Cowley Road restaurant to try her vegan take on dirty fast food ever since.

“Three years ago veganism wasn’t as accepted as it is today, but I believed in our product, and our ethos, and knew the people of Oxford would be open to it,” Lola remembers. “Luckily I was right and we have seen veganism grow massively since we opened.”

This has continued well into lockdown and thanks to a new Happy Friday Kitchen collection and delivery service being launched, you can still enjoy her Californian delights from the safety of you own home.

“We have been very fortunate to have such a loyal cult following in Oxford. Our customers really care about us and want us to survive. Their support means everything,” Lola says.

As for Lola, she became a vegan six years ago having tried the 30 day vegan challenge: “I knew nothing about veganism, but after spending 30 days learning about vegan cooking and the benefits of veganism I never looked back!” she says.

Having dreamed of opening her own restaurant one day, Lola studied professional culinary arts at university and worked in professional kitchens, until deciding to open her own vegan restaurant aged just 24.

So why East Oxford? “I’d been coming to Cowley Road for meals out and drinks for years and knew there was a strong vegan community in Oxford but no dedicated vegan restaurants. After travelling across California it seemed the perfect place,” she explains.

Her hunch was right and now that veganism has exploded across both the UK and Oxford, she opened Happy Friday Kitchen at just the right time: “Veganism has grown massively and it’s amazing to see!” Lola agrees.

“Our aim is to show people how indulgent and satisfying vegan food can be. Many of our regular customers aren’t vegan themselves, but we get regular feedback from vegan and non-vegans alike that they can’t tell that our meat alternatives aren’t really meat,” Lola says.

So what are the most popular Happy Friday Kitchen dishes? “Our award-winning seitan tenders (house-made vegan ‘chicken alternative’ breaded and fried) which go down a treat! Our hand-stretched pizzas especially the ‘Meat Loathers’ which is our answer to a BBQ meat pizza, and our nacho burger which tastes like a traditional beef burger topped with tortilla chips, guacamole, pico de gallo and melted cheese on a toasted brioche bun.

“As for desserts, the most popular is the deep-fried peanut butter chocolate chip cookie dough balls. There is also a milkshake menu including the customer-favourites ‘Snickers’ & S’mores shakes,” Lola says proudly.

With hand-made tacos and an all new pizza menu on the horizon we can expect more tantalisingly good vegan dishes on the menu soon.

Lola smiles: “As the name suggests Happy Friday Kitchen aims to make every day feel like a Friday. Our goal is that veganism will continue to grow and people will continue to be educated on the benefits of a vegan diet.”

For more information go to https://www.happyfridaykitchen.co.uk