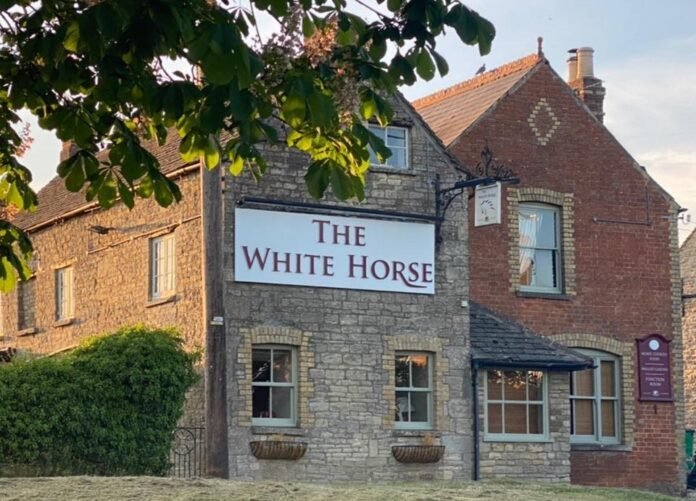 A campaign to save the last remaining pub in Stonesfield has received international attention after the story appeared in the New York Times at the weekend, and a last minute extension has now been issued to raise the £480,000 needed.

Claire Brooks of the Save Our Pub campaigning Stonesfield said: “On behalf of all of the Back The White Horse team, THANK YOU for your invaluable support. We are truly humbled by the way our community and friends from across the county, country, and overseas have pulled together to give us a very good chance of making our dream a reality. We are delighted to announce that we are within touching distance of our upper target. We have therefore decided to extend the share sale deadline through Christmas. This will give us the chance to raise the full funding we identified in our business plan to cover essential spending beyond the purchase price for the pub.I look forward to seeing you in The White Horse, our pub, before too long.”

The opportunity to buy shares in the community asset and own a stake in The White Horse was due to end on November 30, but with fund-raising going so well, has now been extended over the festive season.

Simon Warr from the Back The White Horse campaign said: “We have had a lot of interest over the past few days. The New York Times carried a story about our campaign which accelerated our fundraising. We have had a lot of interest from America in particular, but also now Ireland, Austria, Australia and Switzerland. We are getting very close to our target and just need a bit more support to get us over the line.”

So far 623 shares have been sold to members of The Stonesfield Community Benefit Society. The campaign hit its first £100,000 milestone after only a week of fundraising following the launch of the #backthewhitehorse community share sale giving local people a unique opportunity to buy a stake in The White Horse and ensure that it is not sold to developers.

Simon Warr added: “We are within touching distance of our upper target and have decided to extend the share sale deadline through Christmas. This will give us the chance to raise the full funding we identified in our business plan to cover essential spending beyond the purchase price for the pub.”

“From as little as £50, you can become a shareholder in a Cotswolds pub”

People can also make a donation rather than be a share-holder: “When we sent out our community survey, many people said they would like to support our campaign through a donation. There is no denying that we would prefer you all to be shareholders, but we know that probably does not work for some people. With that in mind, we have set up a crowdfunding page where people can make a donation if they wish. All contributions are gratefully received.”

To support the Crowdfunding Campaign go to https://www.crowdfunder.co.uk/back-the-white-horse

Steve Callaghan, Chair of the Steering Committee, said: “Residents and supporters have given us strong endorsement that we are on the right path with the bright vision we have for the future of the pub. Robert Courts MP has lent his support, as has the management team at Blenheim. Those outside the village will always be welcome at the pub and we would be delighted if they want to buy some shares as well.”

He added: “The White Horse can be so much more than just a pub, serving everyone in our community and as a destination for all. We just need to save it and bring it into community hands.”

The White Horse has been serving the local Stonesfield community since 1876 and is the last pub in the village having out-survived five others.

At the beginning of the year the pub was being run as a going concern, but when the COVID-19 lockdown started in March, the tenants were forced to temporarily close the pub and, shortly after, gave up their tenancy. In July the current owner put it up for sale.

“We have had a lot of interest from America in particular, but also now Ireland, Austria, Australia and Switzerland”

Once the broader village became aware of the planned sale of the pub, a small group of residents came together and formed a steering group to explore how best to secure its future.

The community is working with The Plunkett Foundation, based in Woodstock, who run the More than a Pub scheme and they are supporting every stage of acquiring and setting up The White Horse as a community-owned pub.

The money raised will be used to buy, set up and run the pub to contribute positively to village life both socially and economically.

From as little as £50, you can become a shareholder in a Cotswolds pub, sitting in a beautiful rural setting, popular among walkers, cyclists, and people seeking to experience a traditional, warm atmosphere. Unlike private ownership, shareholders will be able to have their say and vote on the future of the pub.

The share sale prospectus, share application forms and the business plan for The White Horse are available from www.backthewhitehorse.com