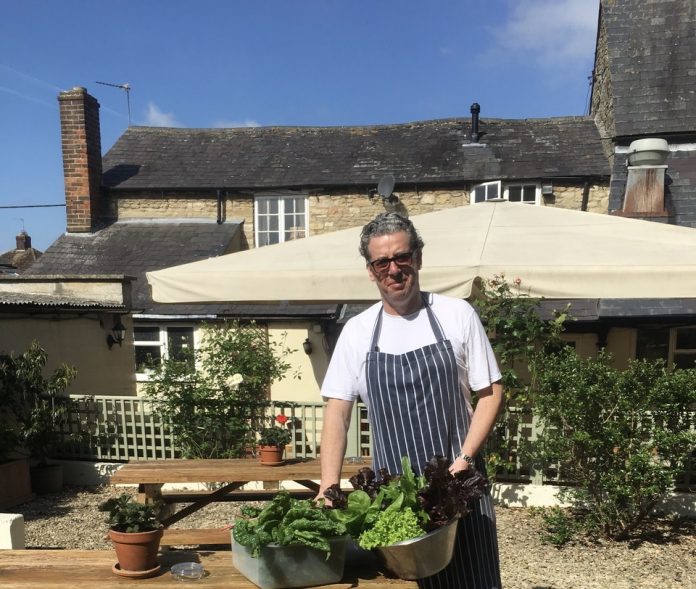 The Oxford Arms in Kirtlington is having to pay half their rent to the brewery, even though the pub is closed during the pandemic, according to landlords Bryn and Oxana.

They are now part of the national #NoPubNoRent campaign because Heineken, which owns the pub, is insisting on the payments while the Jones’ are not making any money at all.

The Jones’ who have been leaseholders at well known gastropub The Oxford Arms in Kirtlington for the last 17 years, called the move “immoral” and said it would “cripple them financially.”

Campaign organisers have drawn up a ‘Hall of Shame’ to identify the pub companies and breweries who are still asking their leaseholders to pay rent, and a ‘Hall of Fame’ to praise those who are not.

Bryn told us: “We don’t have to pay the rent now, but we will have to pay the arrears when the pub re-opens, on top of our current rent, and this is a huge concern for us and other people who run Heineken pubs because we will re-open in considerable debt. Other pub companies and breweries have given leaseholders a rent break during these uncertain times, but we are receiving letters each week telling us that unless we agree to pay 50% of the rent while we are closed, we will have to pay the full amount instead – we feel we are being threatened by Heineken.”

The Oxford Arms is one of the 2,500 Star Pubs and Bars that Heineken owns. Bryn added: “We don’t expect to live here for free and expect to still pay our rent to live at the pub, but to ask us for 50% of the rent when we are not taking a single penny in revenue is ridiculous.

“It is going to be very challenging when we re-open too. I have managed to pay most of the suppliers we owed money to, and others are being very understanding, but when we eventually re-open it will still be difficult and take us a while to get back on our feet. We will re-open in debt and that is not a good situation to be in.”

Despite receiving letters from Heineken telling the couple that each pub is being dealt with on an individual basis, Bryn and Oxana have found that this is not the case.

Bryn added: “We’ve had three weeks of silence from Star Pubs & Bars since March 18 and then they came with a plan, to make their publicans pay rent for the pubs that cannot operate. They claimed it would be dealt with on a pub-by-pub basis but this is clearly not true. They have created a three-tier scheme with a 10% rent payment when pubs do not have the Government’s grants, 25% rent if grants are £10,000 and 50% when the grants are £25,000.”

“Some of our pub colleagues reported that they been told if they do not accept the rent payment being offered then they would be charged the full rent. In their last email to us dated 14 April they said: “If you choose not to take the concession offer your standard contractual rental and associated charges will apply during and after the closed period.”

Bryn added: “The three-tier scheme depending on a grant type may strictly be within the law, but it is plainly outside the boundaries of any definition of morality. They clearly identify that they should get their pound of flesh from the grants that the Government gave us to survive during several months of lockdown. Other pub companies recognise the financial implications of this and are doing the honourable thing by cancelling all rent obligations. Why can’t Star Pubs and Bars follow their example?”

Oxana wants the government to pay attention and intervene to support pubs in the same situation. “The #NoPubNoRent campaign is gathering momentum on social media and I think that if there is enough public pressure the government will take notice.

“What Heineken is doing is immoral. They made a big profit last year and we contributed to that profit, yet at a time when the whole country is coming together to help each other, they are doing nothing for us. They say we work in partnership with them, but we don’t.

“We were so sure they would give us a rent break and be more supportive in these unpredictable times and that we would not be asked to pay the rent at the moment. These are very worrying times for many people who run pubs.”

Lawson Mountstevens, Managing Director of Star Pubs & Bars said: “We are and will continue to do as much as we can to help our pubs. In addition to the Government’s waivers and grants to help cover rent, salaries and other fixed costs, Star Pubs & Bars will provide rent reductions to pubs on an individual basis and will suspend the collection of the revised rent until at least June.

“Once the restrictions are lifted, we want to see all of our pubs open, trading and operating as viable businesses as soon as possible. We know the rent relief, which represents a significant investment on behalf of Star Pubs & Bars during challenging times for the whole industry, and the support we provide on a pub by pub basis will have a significant bearing on the future sustainability of our licensees’ businesses – and clearly we want to see our pubs thrive in the long-term.”