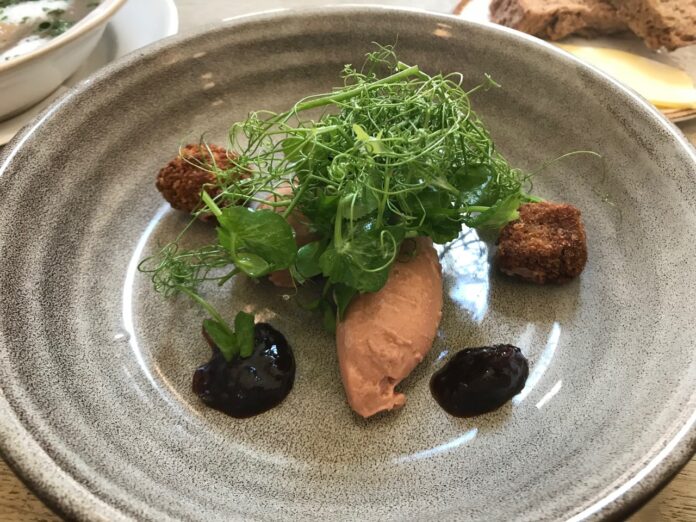 That I’ve been a fan of Killingworth Castle since it first opened, and a regular there ever since, is well documented.

However, Covid forced even its most loyal fans to keep away until recently, independent pubs everywhere suffering in such difficult times.

The Killy’s sister pub The Ebrington being named best food pub in the UK (read about it here) https://www.oxinabox.co.uk/cotswolds-pub-the-ebrington-arms-sister-pub-to-killingworth-castle-is-named-best-uk-food-pub-by-telegraph-and-sawdays/ still meant there were no certainties in such a hard climate.

So news that not only had Killingworth Castle reopened but managed to lure back chef Andrew Lipp, who was in situ when the Wootton pub won its two AA rosettes, was enough to have me scampering back like Trump to The White House.

And what a transformation! Owners Claire and Jim Alexander have obviously been busy in the interim – The Killy now boasts a new sign, a revamped pub garden and a stylish private dining area; the extension and improvements elevating it further in my mind.

Lunch followed suit. Seated in the new quarters, it was a serene, safe and welcoming environment for Mr Greedy and I to sneak a much needed lunch out.

Not that I can rely on him to contribute to anything but the eating. When asked about his stunning duck parfait (a confit leg, plum chutney and toast) starter, all he came up with was that it was, and I quote: “delicious and ducky”.

I don’t think ducky is even an adjective, but you can tell from the main photograph that his compliments did the dish little justice in either its complexity, flavour, compilation or presentation.

I had the chicken and mushroom veloute with white truffle (available with or without the chicken dumplings), another stunning offering whose seasonality was much in evidence.

So much effort had gone into its composition from the truffle foam to the rich, deep flavour, the bite of the mushroom itself and the tarragon jus, all served with home-made bread and butter.

Then the rump of lamb slathered in crushed potatoes, aubergine and a nicoise jus, just the right shade of pink and surrounded by unctuous French ratatouille style flavours of tiny roasted tomatoes and soft, oily aubergine, more like a caponata than any of its English counterparts, and the perfect foil for the autumnal weather outside.

The roasted celeriac, split pea dahl, curly kale and pickled apple was the only veggie/vegan offering on what is essentially a small, neat menu, but certainly more interesting than the ever-so-uninspired goats cheese/risotto options dolled out regularly to the herbivores of this world.

The split peas had just the right bite but were suitably immersed in a rich Indian sauce, again a filling meal despite its healthy attributes.

Had we been saving ourselves for pudding? Perhaps. The poached peach, peach syrup, blackcurrant sorbet and almonds had me racing to the end of the meal – its soft, fragrant, delicate taste reflecting the glut of late harvest fruit. Really original and as light as I’d wished for.

The vanilla cheesecake was also given a makeover, arriving in a neat rectangle complete with salted caramel and a passionfruit sorbet. Cheesecake aside, the sorbet itself was a blimmin’ miracle, the base just the right balance between crunch and crumb, the vanilla seeds evident in the moerish filling.

Jealous? I thought so. Looks like you’d better head down there yourselves to try out Andrew Lipp’s cuisine, because you’re not having any of mine.

For more info or to book go to https://www.thekillingworthcastle.com