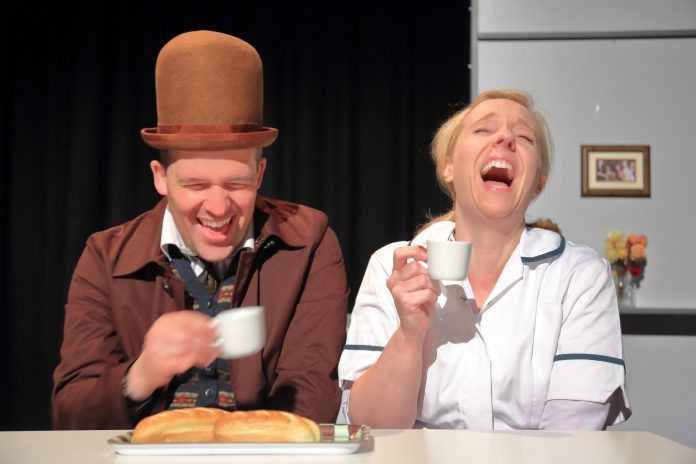 In 2017, professional clown Chris Michael, discovered a Chaplin film called ‘The Immigrant’, and knew instantly that he’d found his next show. Two years later it is out on tour with a cast of three and coming to Pegasus and The Theatre Chipping Norton.

It features Chaplin arriving in a strange new country, so is as relevant today as ever.

“Clowning is both comic and tragic, holding a mirror up to our simultaneously ridiculous and heroic human natures”

“The film’s centenary came at the same time as Trump’s ban on people coming to America from Muslim countries and the UK’s newspaper headlines were all about the “migrant swarm,” Chris remembers.

“And I have always loved old black and white comedy: Laurel and Hardy, Norman Wisdom and the lesser known television work of Jerry Lewis and Dick van Dyke.”

It means that The Immigrant is going down a storm. So what’s the secret? “One of my favourite things about this type of show is that the audience can pretty much do what they want without disturbing the work – whisper, cheer, eat, and open the noisiest bag of sweets!”

“But there is also something magical about telling a story without words, both as a performer and an audience member. I love the fascination of wondering: “What is this character that I’m watching? They’re like a person, but they’re also like a little animal, a child or a cartoon. What are they?”

“It’s a tough discipline working with no words – often more like dance choreography than acting but audiences respond to these vulnerable, open, cheerful clown characters with increased empathy and that is what makes them so special.

Back in the day Chris was the first clown at Gifford’s Circus. “Gifford’s were looking for a clown and I auditioned for them in my back garden! It was a magical summer touring around the beautiful countryside of Gloucestershire,” he remembers.

“Even then, in its first year, there was clearly something special about it. It is no surprise that Gifford’s has become the nationally revered set up that it is today.”

After Gifford’s, Chris set up his own company MOMO Theatre, which has performed over 4000 shows in almost every part of England.

And now it’s our turn as The Immigrant comes to Pegasus on Friday and then The Theatre Chipping Norton next weekend.

So what brought Chris into clowning in the first place? “I decided to specialise,” he says laughing..

Taught by a number of international clown professionals including Angela de Castro from the internationally renowned clown show, “Slava’s Snow Show”, and knew he had found his genre.

“Clowning is both comic and tragic, holding a mirror up to our simultaneously ridiculous and heroic human natures. It requires a lot of detailed work, but it’s more than worth it,” Chris adds.

So if you fancy coming along to share in this unique experience, Chris will be at The Pegasus for three shows on Friday Oct 11 and Saturday Oct 12, before moving onto Chipping Norton on October 19. Bring your noisiest popcorn – guilt free!