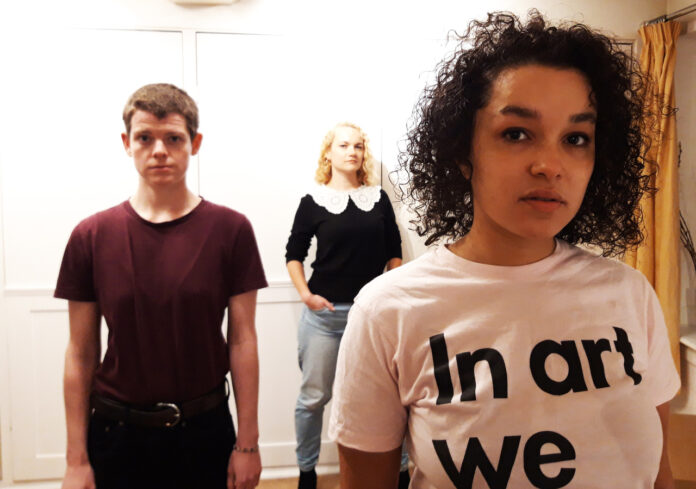 “It’s like a howl of rage” says director Alex Coke when describing Oxford Theatre Guild‘s It’s True, It’s True, It’s True – a gripping dramatisation of a 1611trial when 15-year-old Artemisia Gentileschi did something few women in Rome had done before: she took her rapist to court.

Artemisia was a painter – a fantastic one, as it turns out – and her rapist was, too: Agostino Tassi, beloved by the Pope. But Artemisia stood up against him in court, even undergoing torture to confirm her testimony. “It is true, it is true, it is true!” she repeated as they subjected her to the thumbscrews. The judge believed her.

“It’s like a howl of rage, from 1612 to now,” says director Alex Coke. “The script, by Breach Theatre, uses modern language but stays true to the court transcripts. It’s shocking to see how little has changed. Tassi’s defence – that he’s got such a good career, that he’s a genius – is exactly the “promising young man” spiel we heard about Brock Turner.”

The play is performed by three women, and unlike so many true crime stories, Artemisia’s point of view is at the centre.

“She was this clever, hugely talented, passionate woman and this play brings her voice into the modern age,” Alex says. “I’ve seen so many films and plays where women who have been raped are portrayed purely as victims. But in It’s True, we get to see Artemisia as a whole person. She owns her own narrative, and tells her story without the male gaze. This is her story, not Tassi’s. It’s so refreshing.

“She shows us how her paintings drew on her experiences, stepping into them to demonstrate how she feels. It’s True has this joy and humour, as well as anger. It’s a play for now.”

The show coincides with her exhibition of Artemisia’s work in the National Gallery. Her paintings are often graphic in their detail – in Judith and Holofernes she reimagines the Biblical story of the woman, Judith, who saved her country by slaying a general: Holofernes. In the painting he’s drunk, sprawled out on a bed, while Judith and her maid Abra hold him down and methodically hack his head from his shoulders.

She painted this just after she was raped, and her rage is palpable in every brushstroke. Tassi tried to steal the painting, because Holofernes resembled him – something he was worried would compound his guilt in the eyes of the court.

“Artemisia was under-appreciated in her lifetime. But now, we have the chance to rediscover her work and hear her voice. Join Oxford Theatre Guild for a courtroom drama like no other,” Alex concludes.