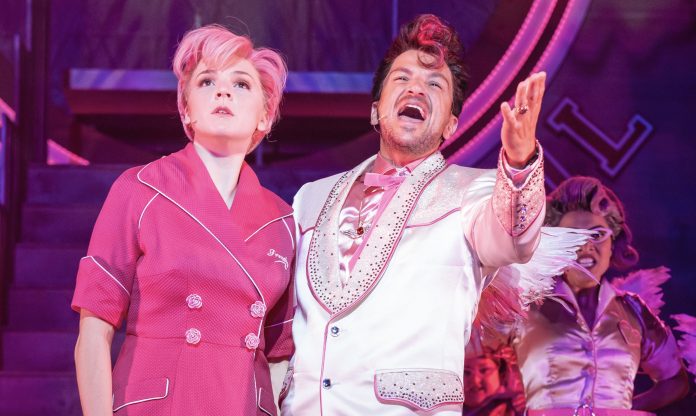 “It’s electrifying, dazzling and slick,” Peter Andre says, as he describes the new version of Grease The Musical coming to the New Theatre from today.

Playing the role of Teen Angel and singing classics such as ‘Beauty School Drop Out’, the famous pop start can’t wait to hit the Oxford stage.

“Really liking the girl but not wanting to show he was too keen, that was me too”

“It’s such an iconic part in both the stage production and the film. The message Teen Angel brings is strong too.

“As teenagers we all go through that phase of ‘I don’t want to go to school’, but what we’re saying is ‘listen, it’s not cool to drop out’ and getting that across in a way that they will listen.”

The English-born Australian singer, famous for hits such as Mysterious Girl and stints on TV’s I’m A Celebrity and Strictly, should know, with four children to keep an eye on, two with former wife Katie Price, aka Jordan, and two with his wife Emily.

But despite his TV and musical career, a stage role is a different thing entirely. So why now?

“I was offered the part of Danny years ago but I couldn’t do it because of the length of the tour,” he explains. “So when the show came up again I said to my manager I would love to do something, but again I wouldn’t be able to commit to whole thing. So when Colin Ingram, the producer mentioned the role of Teen Angel I said that was perfect.”

Because he only stars in the second half? “Haha, that is funny – someone else pointed that out to me too! But I thought, no – I’m going to be there for the whole show. I’ll be watching and soaking up the atmosphere so that I’m ready.”

Will he make Teen Angel his own, or has he been watching previous performances to gain some inspiration?

“I asked Arlene Philips, our choreographer, if I was doing exactly as they’ve done before and she said ‘no, it is going to be with a twist’, so they are making a bigger thing of it. It’s an important part of the show.”

Presumably he’s a big Grease fan then? “I think it encapsulated most teenagers – what they were really thinking and feeling.

“You start getting feelings for other people, your bond with friends is really tight. I identified with Danny in some ways as well, where he was kind of acting cool, but was really a softy and a lot of it was bravado – that was me.

“Really liking the girl but not wanting to show he was too keen, that was me too. It made us feel like we were them.”

With a whole new generation to attract, how will this version be different? “We all know the original, but the new one can’t be too fluffy or too sugar-coated. It’s got to be grittier.

“The dancing has got to be a bit more contemporary. I think it’s going to be incredible and I’m really looking forward to it. It’s almost like it’s gone full circle and is going back to the original – how Grease was before it became a film, but done in a contemporary way.”

Not that Andre is a stranger to Oxford, having performed their several times. “Oxford is one of those places where it is always great to perform, so it’s really nice coming back and doing something like this, especially somewhere as prestigious as Oxford.”

So grab your T-Birds and Pink Ladies and head down to the New Theatre this week as the cast of Grease The Musical take on the wonderful story of leather-clad greaser Danny, girl-next-door Sandy and the trials and tribulations of teenage life.

With favourite numbers including Summer Nights, Greased Lightnin’, Hopelessly Devoted to You and You’re the One That I Want, you’ll be singing along with Peter every step of the way.