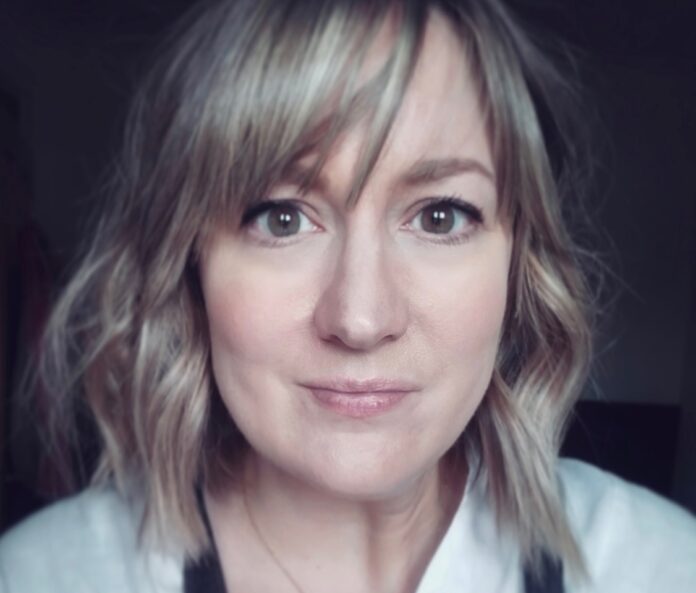 “It’s been a strange year but a good one,” Hook Norton artist Rachel Cronin tells me after winning the 2021 Mary Moser prize for her evocative, ethereal, and sometimes unsettling, paintings of North Oxfordshire.

The award was established by Oxfordshire Artweeks in 2003 to mark the work of a local artist who has taken up art as a second career later in life.

“As an artist you spend huge amounts of time alone in a room painting, and you don’t know if what you are doing is any good, or if anyone will even like it, or care, so winning this award has been amazing. It’s a massive deal when you’ve been chipping away at the coalface for as long as I have and I’m enormously grateful,” Rachel says.

“I’ve been on the periphery for so long looking in, that this means a lot,” the 43-year-old adds.

“The Artweeks board always finds it such a pleasure to award this prize, as the recipient has often found it a springboard for a burgeoning career in art,” Esther Lafferty, Oxfordshire Artweeks Festival Director, says.

“Awarding Rachel this prize this year also seems timely in the pandemic: Rachel’s paintings, often with an underlying hint of the unnerving, reflect that sense of calm that many people have sought in the open spaces of the countryside over the last year.

“landscape painting was out of fashion. I felt like I didn’t fit in and that the only art scenes that counted were in London, Paris and New York”

“They are both grounded and exquisite, and we look forward to seeing great things from her in the future.”

The Mary Moser annual prize honours the work and commitment of Lady Mary Moser who took up art seriously on retirement and became a printmaker; first working in silk screen and latterly in etching and woodcuts, Mary was also chair of Kids@Art, the Oxfordshire Artweeks Education Charity.

Previous winners include Crabby Taylor, a raku-ceramacist from Chipping Norton; Elaine Kazimierczuk, a painter from Oxford, and Wendy Newhofer, a Jericho glass artist.

As for Rachel, 42, she completed an art degree in Hull but grew disillusioned and drifted into another career – namely events at The Mill in Banbury.

“Everyone was doing installations at art college, and landscape painting was out of fashion. I felt like I didn’t fit in and that the only art scenes that counted were in London, Paris and New York.

“I didn’t know there was such a thriving rural arts scene in the UK’s towns and countryside and that you could make a living as an artist that way.”

Rachel still painted in her spare time and taught watercolour and oil painting classes, but it was only when she was made redundant that she seized the opportunity to get back to her first love – painting – and really dedicate herself to her craft, to make the commitment.

Fascinated by patterns and bright saturated colours, her abstract style continues to develop. “It wasn’t until 2017 that I started to see a difference and knew I was finally getting somewhere – the marrying of what you envisage in your mind with what emerges on the canvas,” she explains.

Her art is now hugely popular selling well in galleries such as Darle and The Bear in Woodstock, Fitch & Fellows in Thame, Wychwood Art Deddington, The Heseltine Gallery in Banbury and in lockdown online. Rachel is also an Associated Artist at OFS in Oxford and The Mill in Banbury, as well as a valuable member of the Chipping Norton Arts Group.

As for the landscapes themselves, Rachel says: “I’ve always been drawn to landscapes, seeking out forms, patterns and colours. It’s the countryside that inspires me most and I love the rolling land of North Oxfordshire, woods and trees, and lesser-known spots. I love picking out the man-made elements like gateposts and fences and evidence of ancient ways of life.”

“I was always fascinated by history, and its strange stories in particular. I’m rather a magpie, collecting snippets of history and tales that catch my attention. I suppose it’s the same kind of approach I have to looking at the landscape!”

“I particularly love the Roman Road from Shutford to Broughton Castle. It’s very flat and straight with some great wide views and passes through little farms and by pretty babbling brooks.

“Or from Whichford Hill, there’s a wonderful rolling view down to Hook Norton beneath massive skies and, standing at the top, you get such a sense of distance and of the vastness of the land as field patterns stretch into the distance, and of time too, and centuries past.

“I pass by a spot called Traitor’s Ford on one of my favourite circular walks and always wonder why it is known as that: One theory is that the name was originally Trader’s Ford because of its position on an old trading route, whilst other people suggest a traitor was hung here during the civil war after the nearby Civil War battle of Edgehill.”

Which was something that the judges picked up on when awarding her the Mary Moser Award: “It’s that haunting sense of intrigue rooted in timeless landscapes which Rachel captures so beautifully in each of her paintings,” Esther continues.

And with Oxfordshire Artweeks plans gathering momentum for the big showcase in May, you’ll be able to see Rachel’s work for yourself from May 1-9 at 32 Bath Road, Banbury OX16 0TP alongside jeweller Jane Griffiths, either by appointment or online, depending on the restrictions at the time.

The huge county-wide event will run from May 1-23 and is Oxfordshire’s largest visual arts festival which now includes virtual exhibitions and studio tours as well as hundreds of venues to visit.

For details on Oxfordshire Artweeks 1st-23rd May 2021 http://www.artweeks.org