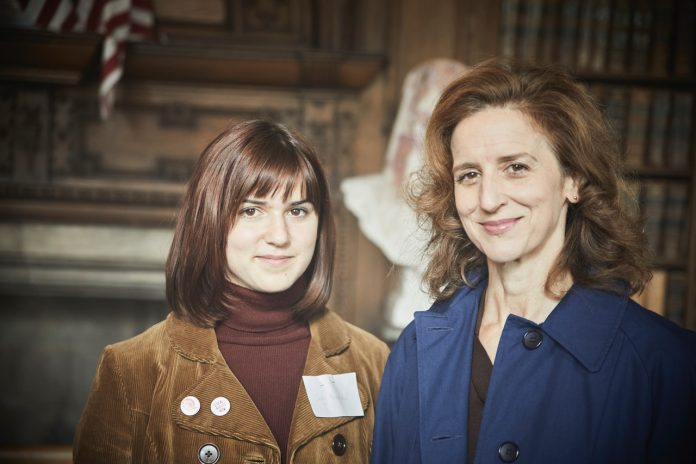 You couldn’t make it up if you tried. Indeed when Abigail Thaw told me about the first episode in Series 7 of Endeavour, it took a while to sink in.

“So are you actually saying that your daughter in real life is playing a cameo part in which she plays a young version of her own grand-mother?” I ask.

Bearing in mind that Abigail’s mother married John Thaw, the original Morse, and we have come nearly full circle.

All will become clear on screen when we meet the young Sally Alexander, a post grad at Oxford University and early feminist campaigner, who is helping newspaper editor Dorothea Frazil (played by Abigail) with one of her journalistic investigations.

Sally was a feminist pioneer and activist in the 70s, a graduate of Ruskin College, who helped organise the first national Women’s Liberation Movement conference in Oxford in 1970, and Emeritus Professor of Modern History at Goldsmiths, University of London.

The first episode – directed by Shaun Evans himself – is where these three generations, so intrinsically linked to the Morse stable, are all in evidence.

“I get to meet my mother played by my daughter. How confusing is that,” Abigail laughs. “It’s three generations in one but we are all the wrong age,” she smiles.

“It’s a very small scene. But we thought it would be a great idea, and Molly really enjoyed it even though she doesn’t want to be an actress.

“while directing, Shaun would ask if I wanted a cup of tea, and then go and make me one, even though I’m sure that was someone else’s job. But that’s so Shaun. He’s very kind”

“It was just a bit of fun, but it was also really wonderful to have my 22 year-old daughter at work with me, seeing what I do.”

So did it give her a real inkling into Abigail’s world? “It was funny because when we got back home to London from filming, Molly kept telling everyone what a hard day I’d had filming,” Abigail laughs.

“filming Endeavour just doesn’t feel like real work because we all get on so well. It’s just lovely”

Ask about the plot though and Abigail is more guarded: “Without giving too much away, Dorothea is pursuing a very suspicious situation without any help. But she is dogged, we all know that, and that continues throughout this series. More than that I can’t say.”

“He’d ask if I wanted a cup of tea, and then go and make me one, even though I’m sure that was someone else’s job. But that’s so Shaun. He’s very kind If there is a mistake or a problem he sorts it out, but he never gets upset. He’s very calm, so filming was very smooth.”

We also know that Series 7 is unlike any other, in that there are underlying storylines running throughout and much more character development. Does that mean we get to know Dorothea better?

“I see DOROTHEA as incredibly pioneering, and I feel very proud to play her”

“Dorothea is pretty solid and yet you never know what’s coming, or what she’s going to say, so it’s always exciting. But that’s the attraction of a part like this, that you get to know your character much more each time, especially in this series. And yet Dorothea is still familiar, which is comforting. It’s great being Morse’s advisory sister.”

So how does Abigail feel about Dorothea as a person? “I see her as incredibly pioneering, and I feel very proud to play her. She is sophisticated yet independent, and great fun to play because she ploughs the furrow in her own way, while commanding respect.”

in real life too? “You’ll have to ask the others,” Abigail laughs, “but we have a good time. Endeavour just doesn’t feel like real work because we all get on so well. It’s just lovely. And I’m not like Shaun or Roger so I can just come in and muck about.

“But otherwise I’m good at keeping my head down. You’d go mad otherwise.”

As for her longevity, Abigail says: “They keep wheeling me out and for that I am incredibly grateful.”

Not that Abigail is exclusively working on Endeavour. “It takes up a lot of time yes, but I still manage to do other theatre, radio, voiceovers or more TV.”

She is about to embark on new comedy Sheila’s Island from the same writer as Calendar Girls: “I’m really looking forward to it. It will be a real change to do a bit of comedy for once,” she says.

So will Abigail be tuning in on Sunday night as well? ” I have to remove my ego and vanity first because otherwise I think ‘God I look so awful’. Sometimes you just have to get on with it. But yes we do watch as a family.”

Perhaps all three generations will be watching it together.