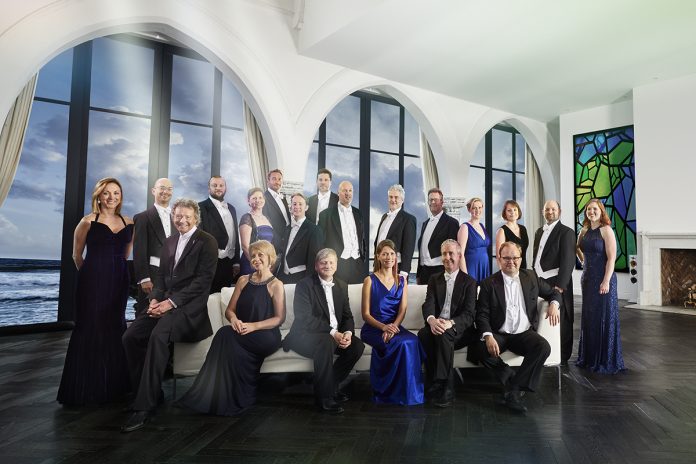 It wouldn’t be a proper Oxford Christmas without the annual visit from The Sixteen, and this year the group is heading to the SJE with a particularly enticing festive programme based around Benjamin Britten’s iconic A Ceremony of Carols.

Britten started writing the piece in 1942, when he and Peter Pears were sailing back to England after three years in America, and he finished it a few months after his return. Nearly seventy years later, it remains one of the most popular seasonal works, and it is one that The Sixteen has not only performed many times but also recorded for its award-winning record label CORO.

“We wanted to revisit A Ceremony of Carols because it’s one of our favourite Christmas programmes, and we do it every five or six years,” says The Sixteen’s founder and conductor Harry Christophers.

“It’s interesting that when Britten wrote it he was not in a good frame of mind. They [Britten and Pears] had left England because they were pacifists and they didn’t know what reception they were going to get. Britten was terribly depressed, and he often wrote his happiest music when at his most depressed.

“To make it slightly different to other interpretations we’ve gone back as close as we know to what the old English sounded like, and we had help from a specialist with that. It’s something that has always interested me. It makes the medieval texts come alive.”

“I’ve tried to balance it all out,” Harry says. “In typical The Sixteen fashion, one or two are quite familiar pieces, but there are also some pieces that haven’t been heard much in recent years.

“It’s lovely to include another piece by Cecilia McDowell. She’s written several carols, and she writes excellently. She often looks back to beautiful medieval texts but writes in a very jaunty 6/8, always very rhythmic and interesting.”

For Harry, an alumnus of Magdalen College, returning to Oxford – especially to the SJE – is always a particular joy.

“The SJE has a lovely acoustic, and it’s more practical than most of the colleges. I’m so pleased it’s all been renovated and people of Oxford have got to know that it exists.

“When I was at university all those years ago, I used to walk up the Iffley Road quite a lot and had no idea this place was there! It’s a really lovely church. It’s so atmospheric, and always a joy to perform in.”

This has been a special year for The Sixteen – it is 40 years since Harry founded the group that almost instantly took the choral world by storm. And, like so many good things, it came about quite by chance.

“It was all a bit cavalier,” chuckles Harry. “I formed the group right after I left Oxford, and it was just a group of friends. I was at Westminster as a professional singer when I was asked to put on a concert at Magdalen. That was in May 1979. A week later we made our debut in London.”

Over 40 years the group has made an extraordinary impact on the classical music world with its Choral Pilgrimage tours, acclaimed recordings for CORO, numerous international tours, the launch of its young artist initiative Genesis Sixteen, its education outreach work and its projects with homeless charity Streetwise Opera, as well as becoming the Voices of  Classic FM.

“It’s developed into something I’m very proud of,” Harry says. “It’s quite amazing all the things we’ve done, it’s been incredible. And we’ve maintained that same joy of performing that we had 40 years ago.

“It’s very much a family, albeit the members have changed. The age range is mid-20s to mid-60s, so very wide. It’s just lovely.”

This year has seen The Sixteen perform Handel’s rarely-staged oratorio Belshazzar at The Grange Festival, in collaboration with The Grange Festival Chorus, as well as touring Monteverdi’s Vespers of 1610, undertaking its annual Choral Pilgrimage tour and having a special 40th Anniversary collection released by CORO.

Coming up in 2020 is a tour of Handel’s Acis and Galatea, another Choral Pilgrimage tour (which will be coming to Oxford in March) and the customary Christmas tour, and a return to Grange Park is scheduled for 2022.

That’s reassuring to know. After 40 years, clearly there’s no danger of Harry hanging up the baton for a while yet.

The Sixteen at Christmas is at St John the Evangelist on Thursday 19th December at 7.45pm. Tickets: www.sje-oxford.org

Some of Oxford’s favourite artistes celebrate December at OFS’ Off Piste Festival with a month of unique online events!

EXCLUSIVE: Korky Paul, the famous children’s illustrator, on his new exhibition at The North Wall and one-off book about Oxford