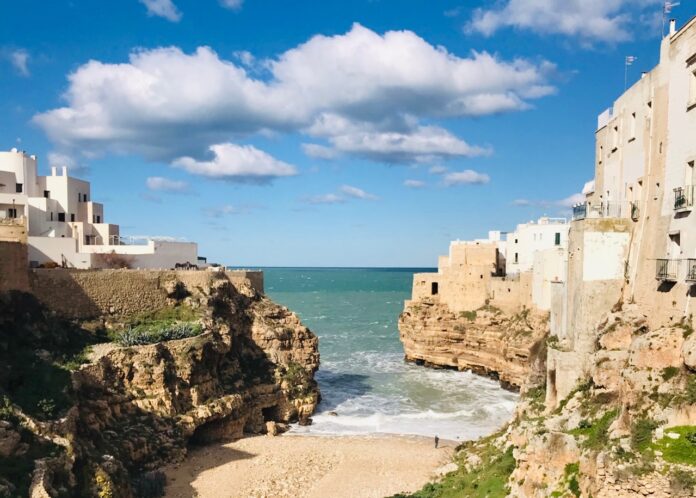 I’m talking to food writer Sophie Grigson on Zoom from her Puglian kitchen in Italy. It is 27 degrees in both Oxford and Puglia, although temperatures soared to 41′ in Ceglie Messapica last week.

She moved here in 2019 on a whim, selling her possessions at a yard sale, vacating her flat in Oxford, packing her remaining possessions into her car and driving through France to Italy to find somewhere to live.

She blames restaurateur Russell Norman for her erratic decision, having interviewed him about living in Venice for a year before launching his Polpo restaurants and cookbook, and wondered why she couldn’t do the same.

And then Sophie read about a village in Southern Italy paying people to live there and that was that!

“It was the best decision I ever made,” she says, even though when she arrived in said village Candela she realised it wasn’t for her. “It was too remote and the money had long gone. I couldn’t have made a living there,” she says.

Continuing on her journey Sophie chanced upon the small town of Ceglie Messapica in Puglia near the sea, fell in love with it and the small whitewashed house she found, and that was that. Home.

Ceglie Messapica cited itself as a gastronomic centre, boasting a cookery school and lots of fabulous restaurants. “The first thing everyone asks you is ‘what you are eating today’,” she laughs. Sophie had finally found what she was looking for and set to work.

A year later she has produced new cookbook A Curious Absence of Chickens, her ‘journal of life, food and recipes from Puglia‘ a charming insight into her recent journey.

What is also evident throughout is how happy she is. “I love it here,” she agrees, “and I love my life here. I love going down to the square every day to order a coffee and write. Everyone knows me now. I’ve made friends and I have no regrets whatsoever.”

Some would say it was a brave thing to do, but Sophie disagrees. “I needed a new challenge, an adventure. The kids had left home, I was stuck in a rut, and while I love Oxford I’d been there for quite a long time.

“And while I didn’t know where I would settle, it was fun. Until then life had been governed by where I lived, my job, children… but suddenly I had this complete freedom to do something completely different.

“And now? “I feel like I’ve come back to life and for that I am eternally grateful. Italy has reawakened my passion and given me my enthusiasm back. I feel younger and happier than I have for a long time. This really is where I want to be.”

But of course what Sophie is really interested in is food and how to make it. She has over 20 cookbooks under her belt as well as several TV series. She also ran Sophie’s Cookery School in Oxford for years, living in the city since 2002, and is now setting up an Italian version Trulli Delicious instead. https://www.trullidelicious.com

So what’s so different about Puglian cookery? “Well it’s not a big pizza and pasta region. There is lots of fish, vegetables, breads, meatballs. It’s full of very vibrant flavours and colours, while in the winter its cosy, slow cooked dishes. Nothing goes to waste,” Sophie says. “The food here is gutsier and a bit rough around the edges which I love.

“But then every region in Italy is so different, even the towns and villages have their own specialities and while usually I’m a bit of a generalist and a terrible magpie, these are all new recipes which is really exciting.”

Her new cookbook A Curious Absence of Chickens reflects this – is a charming book full of recipes, anecdotes and insight. I spent last weekend cooking from it and every recipe was novel and popular, quite a feat these days.

As for the title, chickens were a luxury few could afford, and the habit has stuck meaning the locals don’t cook if often, and very few restaurants serve it.

In the meantime, Sophie is improving her Italian and hopes to follow up A Curious Absence of Chickens with a sequel, which I’m already looking forward to. She also plans to explore the region further once Covid restrictions have lifted, particularly further south which has more Arabic and Greek influences, and is keen to promote the region.

“So it there anything she misses? “I miss Oxford and my friends and I’d do anything for some Asian food – a Thai takeaway would be pretty amazing right now. But other than that I’m very happy thank you.”

Of that there is no doubt.

A Curious Absence of Chickens is available at all good bookshops including Blackwell’s, Daunt Books and Amazon https://dauntbooks.co.uk/shop/books/a-curious-absence-of-chickens/