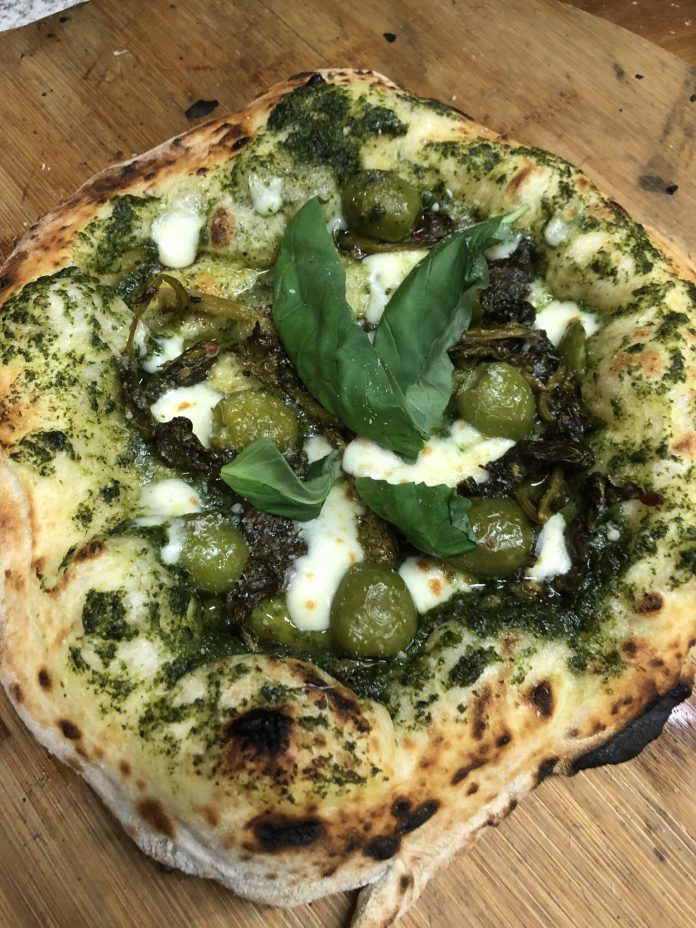 “The Pizza Boys started like all of our good ideas do, in Simon’s garden with a rum and coke, a belting mix of Stereophonics, Bon Jovi and Gary Clarke Jr sounding out from the speakers, as we played around with his newly built wood fire pizza oven,” his partner-in-crime Danny Holman tells me.

‘We thought wouldn’t it be great to do this for a living and even if it was a throw away remark at the time, it planted a seed that has grown into ‘The Pizza Boys Bicester,” he adds.

The two close friends and fellow chefs have since decided to take their own advice and painstakingly played around with dough recipes and their signature base sauce until they found the perfect combination.

Now the proud owners of their own pizza van, you might have seen them at festivals, farmers markets, weddings and events over the summer. If not now’s your chance because they are setting up shop at The Angel in Bicester every Wednesday night.

The Bicester pub doesn’t serve food, but has now been allocated a marquee and seating area from where they will serve their delicious pizzas.

So what has brought on this Italian extravaganza? “We both went to Banbury College 15 years ago to do catering and have worked in Oxford colleges over the years. But this is something a bit different.

“So we experimented away with different doughs and techniques, watching YouTube videos and just practising obsessively, before we came up with our own recipe. It has become a passion of ours really. And then we went to Naples in September to see how realistic our version was.”

And? “Yes, pretty good. We were there for three ays and ate about 14 pizzas” so we did a lot of research,” he laughs, but they were a good comparison so we were very pleased, Simon adds. “But yes we did eat a lot of pizza.”

And the secret? “The ingredients. They need to be simple and fresh. No tricks, just lots of flavour.

If you venture to Bicester, you can expect a changing menu of between six to eight pizzas on offer and the boys plan to slowly introduce sides and salads as well.

Now joined by their Brazilian friend Adalberto who has many years of catering experience, the boys are ready and waiting to serve you what they think is the best pizza in town.

“We are so proud of our pizza so it was definitely time to take our passion to the next level and start our own business,” Simon says.

REVIEW: “This is the real deal” How the White House in Bladon’s food has been transformed by head chef Ben Bullen

There’s a new tapas place in town, and it’s unlike anywhere else. Welcome to El Rincón and its unique and delicious take on Spanish...

REVIEW: Skull Crusher or Bone Marrow cocktails anyone? Why you should visit The Ivy over Halloween