Home Eat Is Kubarn the smallest restaurant in the world? How National Chef of...
Facebook
Twitter
WhatsApp 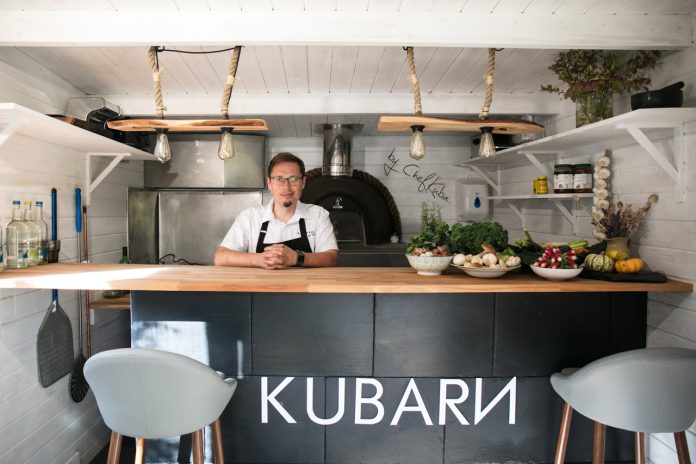 “I have created something you can’t find anywhere else. I have created an experience that did not exist, and that’s what’s so amazing. It’s so hard as a chef to come up with something that’s unique and this did not exist before, so that makes me really happy because it has created a real buzz,” Kuba Winkowski says proudly.

Kuba meets me at the front of his house on a residential street and leads me round to his back garden.

And there, resplendent, is his new restaurant – Kubarn or Kuba In The Shed – the smallest restaurant in the country, if not the world.

You will have come across Kuba at The Feathered Nest if you visited the Nether Westcote restaurant over the past nine years where he reigned supreme as head chef. He also won National Chef of The Year 2019, and had the catering world at his feet.

But then The Feathered Nest was sold and Kuba decided now was the time to venture out on his own by opening up his own restaurant in Oxfordshire.

While looking, Kuba soon realised that cooking and experimenting with food at home in his domestic kitchen wasn’t going to work, so he began concocting a development kitchen in his back garden, housed in a wooden chalet.

It soon developed into more of a passion project than a hobby, and thanks to the National Chef of the Year award prize money and sponsorship, is now kitted out with the best of everything, all based around a wood-fired oven.

Finishing it with a long breakfast bar so that friends and family could come in and chat, watch and eat, Kuba soon realised that he could extend that remit to paying customers, and so Kubarn was born, seating just four.

Already the talk of the town, his fans and loyal followers have been flocking there in their droves from all over the country, by appointment only, and dinner at Kubarn is now the hottest ticket around.

“I’d been thinking of leaving The Feathered Nest for a while and this seemed like the right time. I want to do something for myself. It’s a natural progression for a chef, even though I was proud of what we achieved at The Feathered Nest – making it a real destination restaurant.

“We had three rosettes for many, many years and really established ourselves, but winning National Chef Of The Year was a pinnacle for me. I guess everything happens for a reason, but working there really built up my confidence.

“So now I’m ready to set up my own restaurant which takes time and Kubarn is a way of keeping my name in people’s minds so that when I do open up properly, people will still know who I am.”

Arriving in England from Poland to go to catering college here, Kuba then worked at Le Manoir in Great Milton for three years before heading up the Feathered Nest Kitchen.

Fascinated with artisan cooking techniques and traditions such as smoking, curing, pickling and fermenting, Kuba quickly developed a unique style and menu which combined his Polish roots with his Cotswold seasonality and his reputation spread.

“It’s a reaction against the lab style cooking that sprang up that caused me to go back to basics.

“But in the meantime people can come here,” he said gestering at the wooden breakfast bar and this new kingdom where he presides.

“Kubarn is just a mini version of what my restaurant will be like.”

Unsurprisingly the reaction has been amazing. “Well this place is perfect for the Instagram generation. And yes it’s a cool place, but it’s the experience itself that people love because people can watch me cooking from scratch, and I can explain it to them as I go along, so it’s very interactive.

“People find it relaxing and they learn as we go along so it has exceeded all my expectations. I’m, very, very happy with the whole experience because I can share my love and my passion with a live audience.

So what can people expect? “Well the dates are filling up and I can mould the menus around what people want. I can do a surprise menu where people don’t know what they are eating, or a seven course Wagu beef evening. I make my own bread and butter so the evenings are certainly tailored around the guests. I don’t have a licence to sell alcohol so it’s BYO,” the 39 year-old tells me. “If I had to sum it up I’d say English tapas.”

As for his future restaurant, Kuba says he hopes to open up in about six months time. His vision is to provide “an extension of a farmhouse kitchen really, no fuss. It’s not about fine dining and sommeliers but providing a hub for Cotswold produce in an open and communal space with the warmth of a home kitchen, just on a bigger scale. It won’t be starter, mains and dessert type scenario, but somewhere that people can try new dishes. It will be about enjoying some amazing food while you watch the chef at work.

“People might think I’m crazy but I just call it passionate. My drive hasn’t diminished over the years, its just grown stronger.”

Go to kubawinkowski.com for more details or to book.