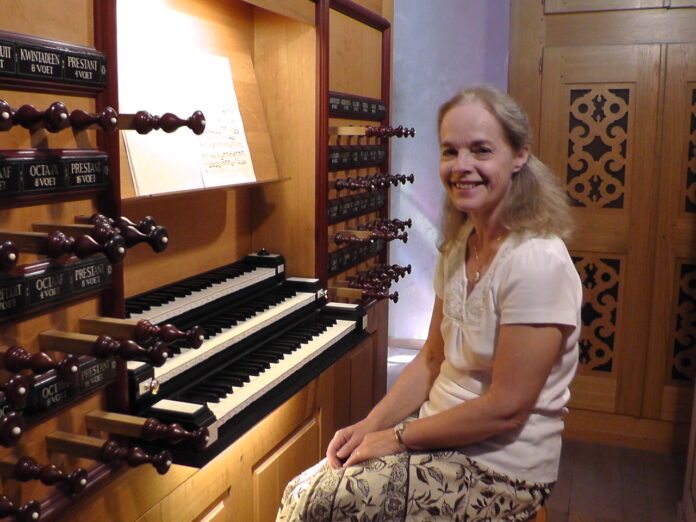 In memory of Andrew

When Margaret Phillips sits down to play Christ Church’s magnificent Rieger organ later this month, it will be her first visit since recording a programme for BBC Radio 3 many years ago.

She is returning to play in memory of Dr Andrew Chamblin, a theoretical physicist and Christ Church graduate who died suddenly in February 2006, aged just 36.

The Andrew Chamblin Memorial Concert series was established soon afterwards, and is now in its fourteenth year.

As with previous recitalists, Margaret will be playing a programme that reflects Andrew’s love for Bach and other music from the baroque era. All the composers have some connection to Bach – except one, William Walond, an 18th century English composer from Oxford.

“He’s the only English composer I’m going to play, and he actually spent all his life in Oxford,” Margaret explains.

“We don’t know much about him, but he might have been an organist at Christ Church or New College. I thought it was nice to include something by him because of the Oxford connection.”

All the other composers, though, are very much from Bach’s circle. First up is Praeludium in C by the German composer and organist Georg Böhm.

Margaret says: “He was working in Lunenburg in Germany when Bach was there, and we didn’t know until relatively recently whether he’d actually taught Bach as a young man, but a manuscript came to light recently which mentioned him as Bach’s teacher, so he definitely did teach him.

“The second is an Italian composer, Girolamo Frescobaldi, and this particular collection of pieces, from Fiori Musicali, Bach actually owned a copy of this work. For him to have a copy of an Italian work was quite unusual, so that’s why I’ve included that.”

“Then there’s a French composer called Louis Marchand, who would have met Bach, but there was supposed to be a contest between them to see who was the best performer. Marchand obviously decided at the last minute that he couldn’t face it and he took fright and disappeared!”

The rest of the programme is devoted to the master himself, J.S. Bach.

“I’m playing three choral preludes from the Eighteen Chorales, which are pieces that Bach wrote earlier in his life and later on collected them together and revised them, so he obviously thought highly of them.

“Then I’m finishing with one of the big Bach pieces, the Fantasia and Fugue in G minor. The Fantasia is quite solemn and severe, and then there’s a jolly fugue at the end.”

There is one major difference between this recital and previous ones in the series – due to coronavirus, there will be no live audience. Instead, the hour-long recital will be livestreamed online.

“It’s a new experience for me,” Margaret admits. “In fact, it will be the first time I’ve actually played to people since the lockdown. I did a recording recently, but that’s obviously different. So I have absolutely no idea what it’s going to be like. I think it’s going to be rather weird, but we shall hope for the best!”

Widely regarded as one of Britain’s most outstanding organists, Margaret has established an international reputation as a soloist, playing at some of the most prestigious concert halls and cathedrals in Europe, the USA, Canada, Australia and Mexico. She studied at the Royal College of Music, returning there in 1996 as Professor of Organ.

The daughter of a vicar, playing the organ seemed a natural step.

“My family wasn’t particularly musical, but I had access to an organ so that’s why I started playing. My parents thought it would be nice for my sister and me to learn to play the piano, and I graduated from that to the organ.”

One of Margaret’s earliest performances was also one of her most memorable.

“I’d only just finished being a student and I got to play a recital at the Royal Festival Hall at just two days’ notice,” she recalls. “It must have been during the 70s, and the strikes were on so there were a lot of power cuts.

“The person who was supposed to play was coming from the States or Canada, I think, and there was no guarantee that he would be able to play, because obviously if there was a power cut there wouldn’t be a concert.

“My teacher, Ralph Downes, designed the Royal Festival Hall organ and was more or less looking after the series there, so he got me to play at two days’ notice. I don’t think I could do that now! It’s the sort of thing you do when you’re young because you don’t think about it, you just sort of do it.”

Happily, Margaret has had a bit more notice for the forthcoming recital at Christ Church, and she is looking forward to playing her baroque programme with its connections to both Bach and Oxford. Andrew Chamblin would surely approve.

The fourteenth Andrew Chamblin Memorial Concert will be livestreamed from Christ Church Cathedral on Tuesday 29th September at 8pm, free of charge, on the following link: https://youtu.be/ujVimzjiuMY.