Home See Art “I’d rather my work was hated or loved than ignored.” Snap up...
Facebook
Twitter
WhatsApp 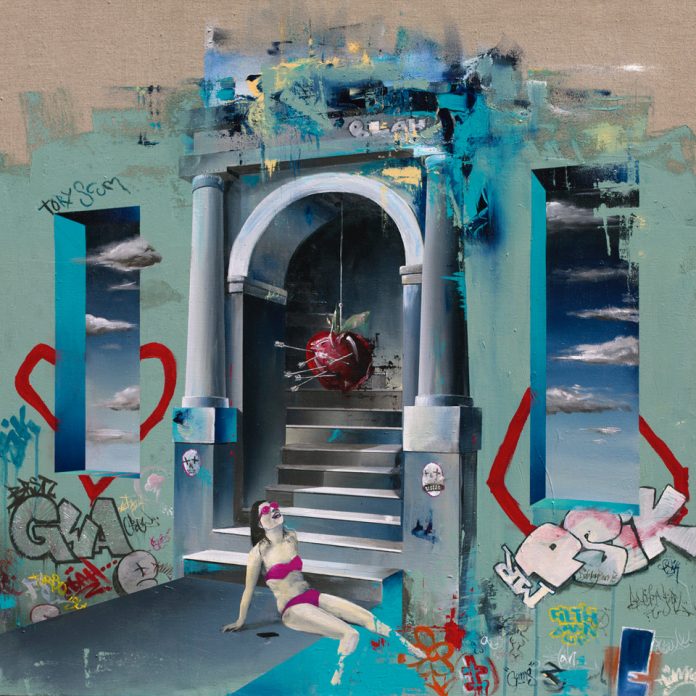 Tommy Fiendish. The name alone will open doors. But it’s his art that’s elevating the young artist to a newfound status and level of fame in the art world, unimaginable only a year ago.

“art was always what I was going to do, even if it killed me trying”

Having only graduated last summer, the 40 year-old has lived many lives, all of which he says have helped craft his work.

From tattoo artist to traveller, graffitt artist to raver, musician to sign artist, video and animation expert to DJ, his time living in Manchester and London meant a transient existence, which gives his work a watchful, elusive quality.

The often dark tones and subject matter, sepulchral in effect, were immediately spotted by Dantzig Gallery owner Dave Davies, who was tipped off about the graduate artist.

“As soon as I roll out of bed I’m there in my studio, painting away with a cup of tea, in my pants”

Spotting Tommy’s potential immediately, and taking a punt on his mesmerising, entrancing, bleakly seductive art for the lucrative Christmas period, Dave says: “I know he is going to be huge.”

Thus Tommy is talking to me in Dantzig where his paintings are lined up, ready to be hung in his first ever solo show later this month.

“It’s a dystopian social commentary, with a twist of macabre drollery,” Tommy says grinning at me, a wordsmith perhaps as much as an artist.

“I think it’s important to write things down and understand who you are and what your art is trying to say. It helps you to understand your own work. My father taught me that.”

His father David Eddington, is also an artist who explained to Tommy he needed to keep something back – to create a sense of mystery within his work, leaving his audience wanting more.

Growing up on a Camden council estate Tommy talks of his childhood fondly. His mother – now a professor of mineralogy then moved to North Manchester when Tommy was 12 . “It was Shameless country and a massive culture shock – white and small-minded compared to the multiculturalism of London,” he remembers.

But then the rave years hit, and when his mum moved back to London, Tommy stayed, living in squats and shared houses, getting a job as a tattoo artist and travelling the world, happy but untethered.

“Manchester was like a giant festival back then,” he recalls fondly.

Going to LCC, University of the Arts London, changed everything. He thought they would teach him technique but instead made him question what art was: “It made a big difference.. going to university changed my work ethic and ideas totally.”

I had no ties, no job. I lived in a warehouse in London, it was like an artistic community. I was interested in going back to education after 20 years. I was 16 when I left school.

“The question was how could I turn this into a job. I wanted to make some money,” he adds.

Having sold one of his biggest pieces in his degree show, Tommy then spent every penny he had on entering the Saatchi Art Fair. By day three he’d sold enough to cover his costs, so got his darker work out, the stuff he loved the most.

“It always attracts people and becomes a talking point and one guy came up and wanted me to do some work in the same vein for him designing computer games.” Turned out he was from EA Games – hence the new Need For Speed game features Tommy’s graphics.

“People like the dark side of life and the market for it is really picking up. You have to be able to sell your art too though so it needs to be commercial while maintaining an edge, something that stands out and grabs them. I’d rather my work was hated or loved than ignored.”

Now concentrating on his new solo exhibition, Tommy says: “I paint because I have been affected by something, usually an image or a vision that has given me a physical sensation and altered my current state. It’s work you feel as well as view.

“I am questioning more and more what painting is and what art is within my own work,” he adds.

So how does he feel about his first ever solo show? “Having my stuff up in Dantzig for a month is a big deal, but I’ve got a lot of work to show and some of my biggest pieces will be for sale.”

Dave has also commissioned him to do a few Chuchillian paintings, which has been a new experience for Tommy. “I don’t do celebrity stuff but I got really into depicting Churchill’s old, weather-beaten face.

“this is my job which is amazing in itself. It’s so liberating. Art is freedom”

By now we have moved across the road for lunch at The Woodstock Arms, as Tommy continues:

“Working in series allows me to explore ideas, themes and techniques. Although the subject varies there is a continuity in the tone. I enjoy creating a sense of drama within the work that can be dialled back to a level of contained urgency and a sense of foreboding, or unleashed in full dramatic force,” he says.

Now that his name out there is that a pressure in itself? “I am starting to move forward but it’s still a struggle – constantly trying to get your work out there, and getting noticed, but I’ve got to keep this momentum rolling. Once I’m in my home studio in Hackney though I’m focused on my work and nothing else. As soon as I roll out of bed I’m there, painting away with a cup of tea in my pants.

“But there is a real buzz about the show in Woodstock already and if someone believes in your work then hopefully the people around them will too,” he says.

“Either way, this is my job which is amazing in itself. It’s so liberating. Art is freedom. I don’t have the restrictions of working for someone else.

“So art was always what I was going to do, even if it killed me trying.”