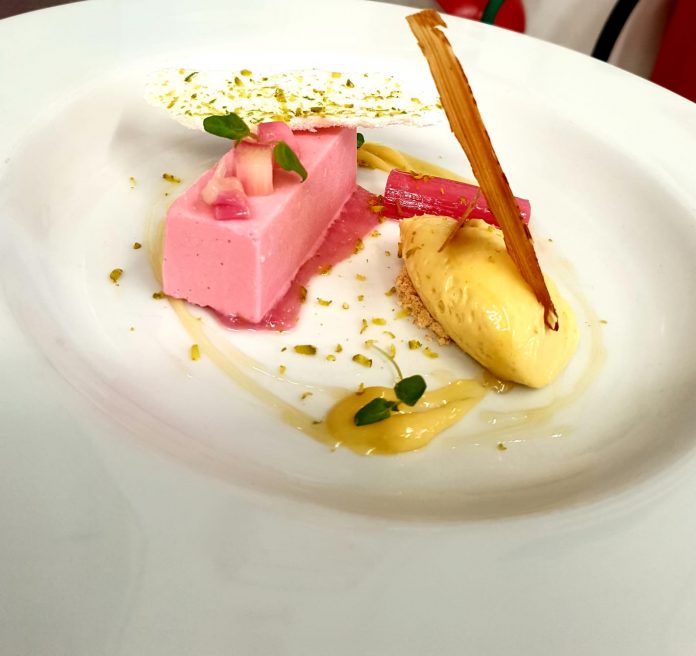 New head chef and Yorkshireman Andrew Carr is busy telling me about his forced rhubarb delivery, grown in the dark and harvested by candlelight in his home county.

The resulting dessert is so exquisite and perfectly compiled it actually takes my breath away. This is a chef who is clearly not only passionate about what he does, but the ingredients he uses.

Now that landlord Mark Butcher, aka Baz, has nabbed him for the White Hart in Wytham, the 16th century inn’s noble reputation for amazing food looks set to continue.

Andrew has been there for three months now, after equally able former chef Martin Sherriff upped sticks and moved to The Black Horse in Standlake.

And judging by the lunch I had there this week, The White Horse in Wytham looks set to go from strength to strength.

If you want to know how exceptional Andrew’s cooking is, just order dessert

This was endlessly reinforced by the constant stream of customers who come up to Baz on their way out to compliment him on their amazing food, is an almost comical procession.

“We’ve never had anything like that rhubarb dessert before, but it was absolutely exceptional,” the last duo said in awe as they departed.

“They are the reason I get up in the morning – the customers. Their comments really make a difference. They make it all worthwhile,” Baz tells me.

Which is good because seven years ago Baz made a U-turn in life, giving up a long and successful career in advertising to take on The St Giles Cafe in Oxford and transforming it into a bustling hub within two years.

He then turned his attention to The White Hart in Wytham, a pub he long remembered. Baz was determined to put it back on the map and reinstate it into the exceptional village pub of yesteryear.

One thing’s for sure, With Andrew Carr at the helm, Baz’s loyal customers and punters are in for a treat

“I knew The White Hart had massive potential and still do. I believe it’s one of the best pubs in Oxfordshire,” he says, “but the most important thing to remember is that it’s a village pub first and foremost.”

Incredible food aside, Baz runs a great schedule of evens from jazz (Stacey Kent or Ronnie Scott’s anyone?) and cabaret to children’s shows.

In the summer the ancient patio garden is crammed with walkers and visitors basking in the sunlight, enjoying the renowned BBQs, while in the winter the log fires welcome the punters.

A wide, varied, and ambitious menu for vegetarians and vegans means the pub was nominated for our Ox In A Box Food Awards, and a vegan taster menu is about to be introduced. The roasts are also legendary.

But back to the food. And before I begin I’d just like to pre-empt my review by saying the meal was truly exceptional.

“The customers are the reason I get up in the morning. They make it all worthwhile”

For a start the menu is enormously enticing, which might explain how we ended up with a smorgasbord of starters between the three of us because we simply couldn’t decide; from the Jerusalem artichoke arancini with pickled artichoke, celery and watercress pesto (£7), to the twice baked goats cheese soufflé with poached pear, chicory and caramelised walnut salad (£8), the home-made cauliflower cheese soup with freshly baked home-made bread (£7), the venison carpaccio (another best-seller) with a Henry’s IPA reduction, celeriac, Oxford blue cheese, smoked artichoke and a dijon mustard emulsion.

Oh and the smoked haddock Scotch egg for good luck. Yes, all of them.

And how we feasted. I’m hard pressed to choose a favourite, but the soup was silky smooth and the bread admirable, the arancini were soft and slightly sweet rather than thick and stodgy, crisp on the outside and perfectly aided by the tangy pickled artichoke and the metallic edge to the watercress pesto.

The smoked haddock scotch egg come with a mustard seed velour, spinach and potato foam. It has a very subtle aniseed tang and when I asked, it was a fennel pollen. That’s the attention to detail that Andrew is lavishing on all his cooking and it shines.

As for the carpaccio, the venison was from the local Wytham woods and beautiful to both eat and behold. The soufflé had a wonderful depth of flavour and the soft bounce of the filling contrasted with the crunch of walnut and the tang of slippery pear set against the bitterness of the chicory.

As for mains, we had already over indulged, and although tempted by all the club classics from fish and chips to the White Hart burger, sausage and mash, steak, and pie offerings, in the end we we opted for the the ras el hanout grilled cauliflower with white bean tagine, chermoula and tahini dressing (£15) which tasted even better than it looked, that tomato sauce haunting me still.

Dessert was another smattering of over-indulgence, and thank God we went large because although already impressed, Andrew had saved the best for last. The skill and love poured into his puddings is something to behold and I cannot over emphasise how good they were.

If you want to know how exceptional Andrew’s cooking is, just order dessert.

The hot dark chocolate fondant may have sounded innocuous but it was a masterclass, accompanied by rum soaked raisins, chocolate crackling and vanilla ice cream.

The piece de resistance however, was of course the Yorkshire forced rhubarb semifreddo, white chocolate and pistachio set cream, meringue and lime and lemon, which physically took our breath away, a majesty of colour, pride and taste and all for £7.50.

So happy anniversary Baz. Long may the White Hart continue with its impeccable heritage of hospitality. One things for sure, With Andrew Carr at the helm, Baz’s loyal customers and punters are in for a treat.

The White Hart in Wytham is just off the A34 near Botley and can be reached via Wolvercote as well.