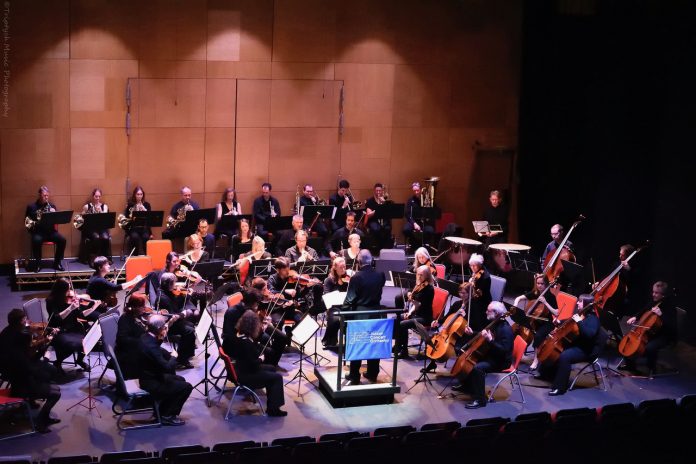 Still hitting all the right notes

Now, with their sixth concert on the horizon, founders Geoff and Jackie Bushell are very happy with the way things are going.

“Musically we feel it’s been very successful,” says Geoff, an experienced conductor who also plays French horn and double bass. “We’ve done what we wanted to do, which was bring high quality music to Didcot.

“Jackie and I thought there was a niche in the market as Didcot has grown so much, with so many new houses in the area, and it is still growing.

“We thought there must be people out there who enjoy listening to classical music and would like to hear it live, and there must be potential players who have moved into the area. Both have proved to be true.”

Their crowd-pleasing repertoire – a mix of popular works and little-known gems – has become a winning formula, pulling in near-capacity audiences at the Cornerstone.

“In each DCO concert we like to do a piece that introduces the players and the audience to something they might never have heard before but actually is unjustly neglected, and they tend to like it once they’ve heard it,” Geoff says.

The neglected gem in next Sunday’s concert is the orchestral suite Fairy Tale by Czech composer Josef Suk, and Geoff is confident audiences will love it.

“Suk was slightly overshadowed by Dvorak, who was his father-in-law, and never quite made it. He didn’t spend all his time composing, because he was a professional string quartet player, but he wrote this piece, Fairy Tale, which really is a magical piece.

“It’s got a lovely melodic theme, and there’s a story going through, and when you hear it you think this ought to be better known.”

Suk’s piece will be played alongside two well-known pieces – Franck’s Symphony in D minor and Butterworth’s A Shropshire Lad.

“The Franck symphony has been delighting audiences for 150 years,” says Geoff. “It’s always been in the repertoire. Musicians love to play it, and audiences like to listen to it.

“Butterworth’s A Shropshire Lad is a very tuneful, very atmospheric piece. There’s a connection with this area because Butterworth was a teacher at Radley College, and there’s a shrine to his memory at the college.

“He was lost on the Somme in World War One, so you always wonder what masterpieces he might have written had he lived. There are quite a few composers like that.”

Geoff and Jackie are delighted to have secured the services of four professional musicians as section leaders, helping to ensure a good quality and inspire the other players.

“We took the decision early on that we would have string section leaders who were professional players, and they come to us for all rehearsals, including leading a sectional rehearsal of the strings,” says Geoff.

“We think this makes a big difference, and the players like it as well. It’s an opportunity for them to sort out difficult passages in a non-threatening environment and get the quality that we want.”

Last October, Geoff was presented with a Didcot Town Council Artistic Award, which marked over 30 concerts conducted in Didcot over a thirty-year period as well as the co-founding of DCO with Jackie.

Keen to build on this accolade, Geoff already has the programmes for DCO planned up to 2022 and is clearly excited and optimistic about the orchestra’s future.

“It’s working well, and it’s brought something to the community. Listening to and performing music has been shown to have quite a number of health benefits to those who are participating in it, so from that point of view you feel that you’re actually doing something good.

“We’d like to see more people become involved with us as players and audience, but overall I think it’s going very well and long may it continue.”

Didcot Concert Orchestra is at the Cornerstone on Sunday 8th March at 4pm. Tickets: 01235 515144 or www.cornerstone-arts.org

For more information about the orchestra, visit www.didcotconcertorchestra.org.uk