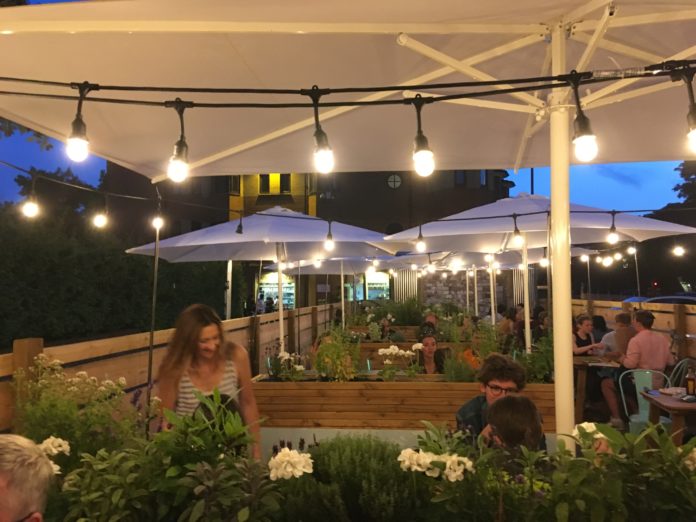 The transformation at The White Rabbit in central Oxford is complete. And while a long time coming, two years to be specific, it’s been worth every second.

Already the outdoor 72-seater space, shaded by cream umbrellas, little wooden tables and planters of growing herbs, wood-burning pizza oven and second bar, is buzzing with clients eager to enjoy the open air space, soak up some rays, have a drink or dine on The White Rabbit’s infamous pizzas.

Because while it is one of Oxford’s favourite, independent and most quirky pubs, its old-world interior, so beloved by patrons in the winter, it was bursting at the seams and ill-suited to summer dining.

Something had to be done, so owner Philippa Farrow decided to turn the dusty old car park, at the back of Oxford Playhouse, opposite Gloucester Green, into a beautiful beer garden.

She knew it would be tough, the bureaucracy and red tape involved in taking over the space, seriously complex and exhausting, but after 24 months of wrangling and form filling, she finally got what she wanted.

It’s hard to imagine the site without the decked area now, but the dream has become a reality and general manager Ed Whinney is delighted with the finished look.

“It has taken twice as long, and cost twice as much as we’d imagined, but we couldn’t be more delighted. We decided that if we were going to do it, why not do it properly and give Oxford something really special and interesting, something you can’t find anywhere else.

“So yes, it’s been crazy but worthwhile,” he beams.

It’s versatile too, because once the summer is over, the powder blue benches come into their own, being thermostatically controlled and ready to warm up the clientele in the winter months ahead.

“The beer garden has been designed to work all year round and will work almost better in the winter, when it will be toasty and lit  up.”

Doubling the dining area has also meant that the kitchens have had to be moved to accommodate the extra pizza ovens required to keep up with demand, as well as extra staff etc.

“We don’t have any regrets though. The beer garden has already made a big difference to the area as a whole. People comment all the time on how nice it looks and how it’s attracting more people to this part of central Oxford, so we are happy.”

The White Rabbit is also looking to source its ingredients s closer to home. “The quality of the flour, mozzarella and tomatoes we use is sacred, but we are now going to source them from the UK.

“It’s certainly a new chapter for the pub,” Ed says “and we have extended our range of beer accordingly. But more than anything we wanted to give our whole range of customers; from academics and students to thespians and locals the ability to enjoy The White Rabbit all year round.”