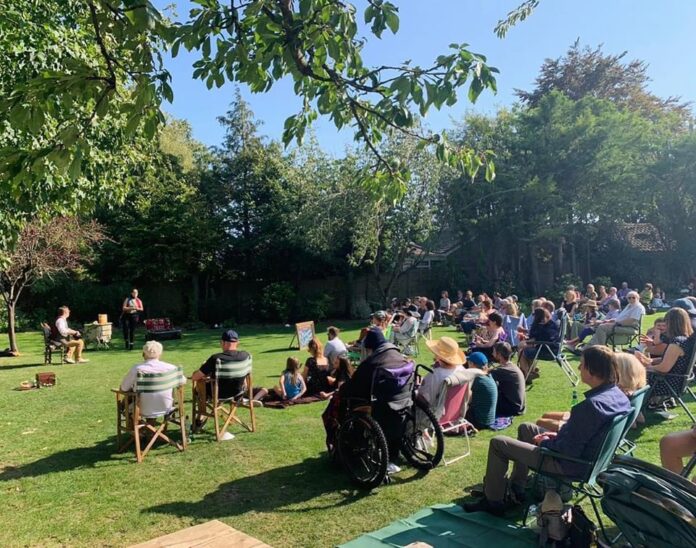 Half Cut Theatre is “cooking up a storm for the live-theatre-starved public” on Sunday September 27, with an hour long, socially distanced version of Shakespeare’s classic ‘rom-com’ A Midsummer Night’s Dream at Isis Farmhouse, Iffley.

The performance by the newly formed local theatre company, set up by two professional actors in a bid to reignite an industry hit so hard by the pandemic, is already going down a storm with audiences.

Headed up by Oxford’s George Readshaw and James Camp, the company’s comedic, musical, one-metre-apart romp through the world of one the Bard’s funniest and most lyrical comedies, comes complete with folk songs, ballads, backflips and a mime artist.

The multi-rolling actors, including musician Ollie King, never leave the stage and have injected pace and energy into this well loved story of fairies, lovers, forests and amateur dramatics!

The cast consists of six classically trained professional actors whose livelihoods have been jeopardised by the pandemic, and are itching to put their professional expertise back to good use.

“Half Cut Theatre was set up during a discussion about the state of theatre during and after a pandemic. We realised the only way was to do it ourselves,” George, who went to the Matthew Arnold School, tells us.

“So over the course of four weeks we rang around the most talented and funny performers we knew, assembled a cast of hungry professionals, and made this one-hour-long trip into the world of theatre and Shakespeare’s classic rom-com, in the time of Covid.

“It’s been the most rewarding experience either of us has ever had – having young children come up to us after the shows to say that it was their first Shakespeare and that they’d loved it, is some feeling. Not to mention the adults who said they had never really enjoy Shakespeare and they couldn’t believe how fun and innovative it was!”

A Midsummer Night’s Dream: The Hour performs at Isis Farmhouse, Iffley on Sunday 27 September at 1pm and 3pm.

Tickets are free but or can pay what you choose afterwards. Reserve a space for you and/or your bubble by emailing halfcuttheatre@gmail.com or following this link: halfcuttheatre.simplybook.it/v2/.