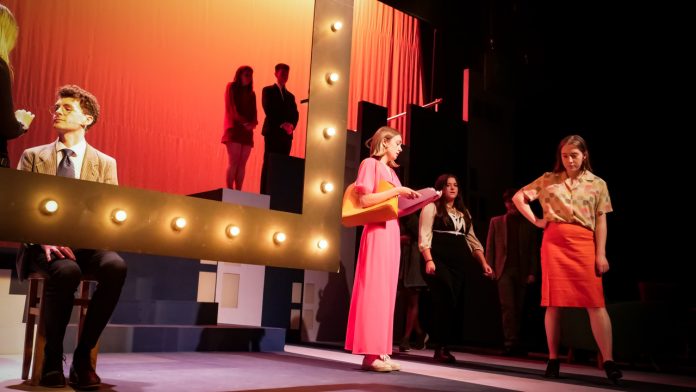 “For us, ‘Merrily’ both starts and ends with its score. Sondheim’s fast paced, glamorous, but yet at moments extremely tender, sweet, heart-breaking score is what first drew us to this particular musical. But it’s been a long road since we had our first ideas about ‘Merrily’ at the Playhouse,” producer Mrinmoyee Roy and director Sam Woof McColl explain.

Between May 2019 and January 2020 they have assembled a backstage team, auditioned a cast of 19, rehearsed frantically, and are now ready to perform the classic 1981 musical which tells the story of three friends growing up and apart in reverse.

Frank, a composer, Charley, a playwright and Mary a novelist, are all successful but Frank in particular has sacrificed everything he values for that success. As the story unfolds, we see the choices they make as young people influence the lives they will have in the future.

“We hope when you see it you will laugh and might even make you cry, because it has its emotive moments – a friendship lost and regained, love, growing up and getting older – extraordinary musical pockets sandwiched between some bigger, jazzier numbers,” Mrinmoyee and Sam add.

“What we hope most though, is that it will make you think. The musical’s backwards timeline means its ending of hope and positivity comes with a side helping of nostalgia.

“It makes us all too aware of the idealised concept we have of ‘the golden years’ of youth, but also of the need to hold on to real, old friends as we grow older.

“Sondheim’s score, performed so wonderfully by the band, helps to tie together a story with very universal themes. Friendship, sacrifice, and the passage of time.”

Merrily We Roll Along is on at the Oxford Playhouse between Wednesday 29th January and Saturday 1st February, tickets start at £10 and are available from the Ticket Office on on 01865 305305 or www.oxfordplayhouse.com