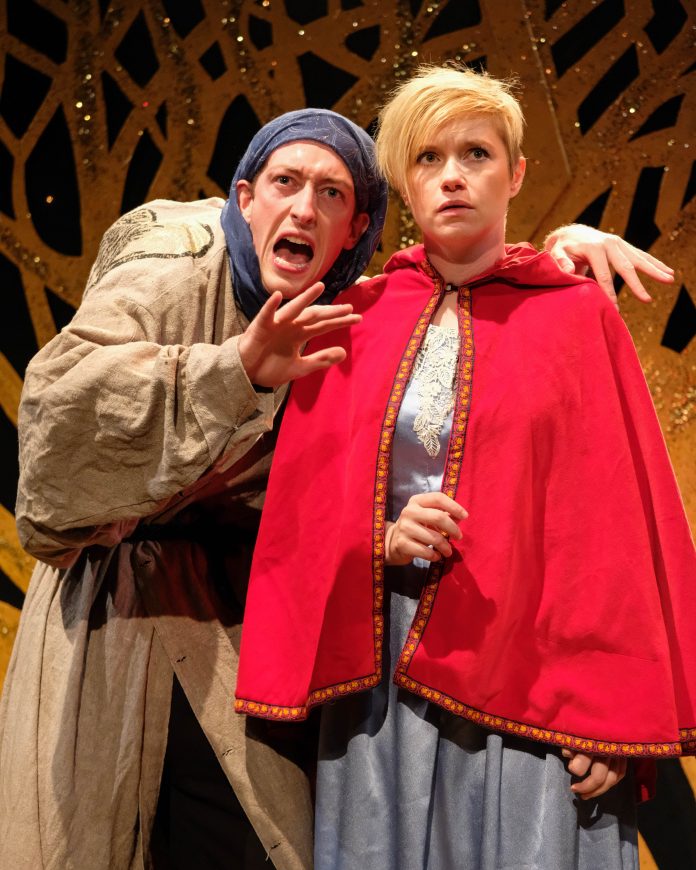 “Gonzo Moose shows are daft, silly and very anarchic. The actors have license to go off script and we like getting the audiences involved by encouraging them to cheer and boo,” founder Mark Dawson says.

“One reviewer said we were like a pantomime on acid.” he laughs.

Soon you will be able to see for yourself, as Gonzo Moose brings its newest production, Once Upon A Time to Pegasus on Friday and Saturday.

The show is about The Brothers Grimm and their sister Lotte. In the Gonzo version, the Brothers have made a Faustian bargain with the evil Rumplestiltskin.

:The inspiration for the this show came from watching Labyrinth and Dark Crystal along with a Jim Henson TV series from the 19080’s called The Storyteller,” Mark adds.

“We thought it would be fun to create our own fantasy world where the characters from the tales exist and have lives outside the fairy tales. We also meet many characters that could have been the fairy tales but they never quite made the cut.”

Mark founded Gonzo Moose back in 2000 along with Paschale Straiton. “We met at Circomedia, a circus and physical theatre school in Bristol. After we graduated we wanted to make and tour a show but theatres would only book theatre companies.

“So we pretended to be a theatre company, the venues believed us, and here we are 19 years later, still going,” he laughs.

Since its creation, Gonzo Moose has been forging its own unique brand of theatre that explosively blends visual comedy, dramatic storytelling and physical theatre.

The team delight in spoofing genres, mashing up traditional tales and generally being silly.
Inspired by the slapstick greats, Gonzo Moose always bring the house down with audiences of all ages.

They have recently enjoyed storming success with The Thing That Came From Over There,  I’m An Aristocrat, Get Me Out of Here, What the Dickens? and the critically acclaimed Is That A Bolt In Your Neck?

Doesn’t that mean timing if everything? “We have a list of the scenes backstage so we don’t forget what’s coming next,” Mark says.

“But then I try to remember that the Brothers Grimm didn’t write any of the stories in their books. Instead they travelled around collecting the stories as a way of recording the regional differences in the German language.”

Gonzo Moose’s Once Upon A Time comes to Pegasus on Friday and Saturday.