Home Do Books Giffords Circus Cookbook is a ray of sunshine in a bleak year....
Facebook
Twitter
WhatsApp 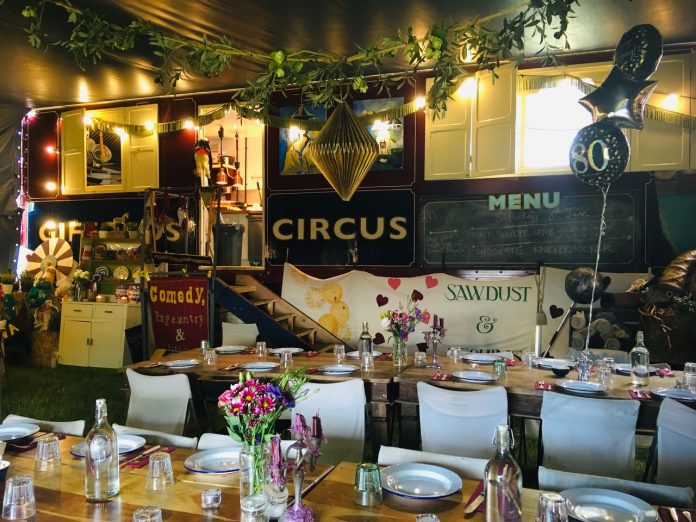 “Giffords Circus was like a magic world I’d never come across. It was totally intoxicating,” Ols Halas reminisces.

“I still remember being dropped off at Fennells Farm in Stroud to start my new job. There were acrobats rehearsing in the yard and a couple of jugglers practising in the sunshine.

“The barn was crowded with people stitching costumes and painting sets while the horses were being exercised.

“And then I was shown the new kitchen wagon which had an oven and a sink and that was it. That’s where my journey began.”

And what a journey it’s been. From those humble beginnings to the roaring success of Circus Sauce, Giffords’ travelling restaurant, which feeds thousands of people every year in its bohemian BYO tent with its long shared trestle tables, heady atmosphere, shared platters, chefs show, and of course Ols’ inimitable food.

And now we can all have a go at replicating his whimsical, nostalgic, foraged, seasonal, locally sourced recipes thanks to The Giffords Circus Cookbook, which, let’s face it, couldn’t have come at a better time.

“It’s always been a dream of mine to produce my own cookbook,” Oli tells me “so it’s amazing to see it come to fruition. I can’t tell you how exciting it is, I’m still pinching myself and Nell was on board from the word go.”

A ray of light then in what has been a tragic year for Giffords. Founder Nell Gifford’s funeral was only a few months ago, and her beloved circus and its devoted troupe’s dedication to ensuring that Gifford’s continued with a show Nell would have been proud of, has now been cancelled indefinitely on day one of rehearsals.

“We have dates right up until September,” Ols explains,”so we hope to be back later this year, but for the meantime we are packing up, which is tragic because we have worked so hard to make The Hooley (Giffords Circus’ 2020 show) a really special experience to continue Nell’s invaluable legacy.”

In fact Ols has just returned from dropping this year’s performers off at the airport when we speak, returning to their homes around the world without experiencing the high octane combination of greasepaint, roaring crowds, laughter, children, music, lights, smell and the heady magic of Giffords Circus, this year at least.

But the rest of us can rekindle some of that magic as we riffle through Oli and Nell’s new cookbook, which is at much about Giffords, as it is about the food cooked there,

“Nell loved the idea when I pitched it to her, and immediately came on board to make it a reality….” Ols pauses. “it’s been hard, very hard, but I know she would be pleased with the results, her influence is everywhere.”

He is also delighted that so may of his idols have been involved in producing the book, from Marco Pierre White’s foreword, to Nell’s introduction and photography by David Loftus.

“I am such a massive Marco fan, and as for David Loftus he took over 10,000 photos throughout the season and kept coming back again and again to take action shots of us at work, so it’s been an amazing journey from start to finish,” Ols says.

Ols has been cooking since he was four years old and writing recipes for as long as he can remember.

He was cheffing in the Alps, wounding a broken heart, when he got a call from a friend asking if he wanted to take on the Giffords catering arm. He jumped at the chance, releasing he had seen the circus in its infancy as a boy, and hasn’t looked back since.

Back then the circus would go from site to site; village greens and farmer’s fields, where he would gather food for the restaurant from local allotments, hedgerows and streams, but now that Gifford’s is a much bigger operation with a large team of catering trucks and his own kitchen staff, and venues such as Chiswick and Blenheim Palace to cater for, he has to plan ahead a bit more.

Ols needs to return to Fennells Farm to start preparing the circus staff dinner, so our interview is concluded, but as he leaves he still has a bound in his stride, knowing that before long Circus Sauce will be back, and that in the meantime the rest of us can stay at home, cook and dream of its return.

To buy The Giffords Circus Cookbook go to https://www.giffordscircus.com/shop/giffords-circus-cookbook 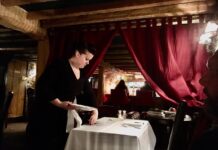 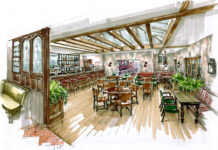