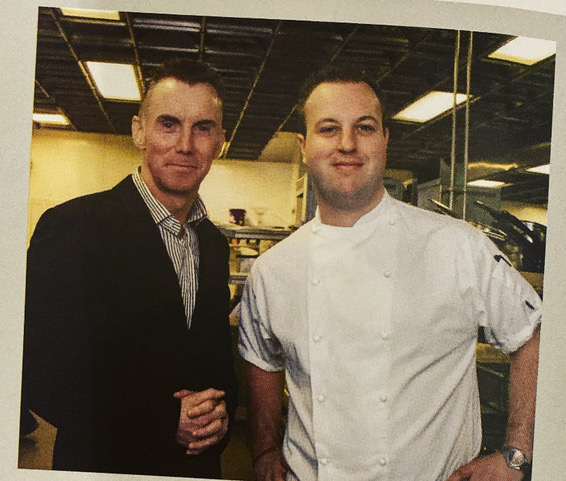 Paul Welburn, head chef at 215 in Oxford, is paying tribute to his mentor, celebrity chef Gary Rhodes by reintroducing his trademark dishes over the coming months.

“I spent half of my career working for Gary Rhodes,” Paul says. “This is my way of showing what Gary meant to me. I would not be the chef I am today without him, but neither would the British food industry be where it is today.”

Gary, who died in 2019 at home in Dubai, would be proud of his protege Paul Welburn. Not only did Paul earn his own Michelin star at Oxford Kitchen, he was recently awarded three AA rosettes, won Ox In A Box’s best chef award, and helped guide the Summertown restaurant through Covid.

Once again doing a roaring trade, now as the more relaxed 215 Kitchen and Drinks, its regulars might notice a few new dishes on the menu over the next few months such as Gary’s lobster omelette thermidor or his trademark bread & butter pudding.

“Gary was the reason I became a chef. His level of professionalism even on TV cookery programmes shone through and really inspired me,” Paul says. “I’m sure he attracted lots of people into the industry but I was certainly one of them, Tom Kerridge was another. I spent half of my career working for Gary.,”

“This is my way of showing what Gary meant to me. I would not be the chef I am today without him”

Which is how the young Yorkshire lad ended up at The Michelin starred Rhodes in The Square in Pimlico. “Going into the kitchens there as a young lad was a sink or swim opportunity. But Gary’s rules were simple – it was all about perfection, but he was also really humble and nice. For him it was all about bringing joy and enjoyment to people through food.”

When Gary asked Paul to move to Rhodes W1 in London with him, Paul jumped at the chance, moving up the ranks fast to become head chef aged just 25.

“Gary then moved to Dubai so I didn’t see much of him after that and never cooked for him outside of his own kitchens, which is a big regret. But he will always be an icon to me as well as a friend,” Paul says.

“So yes he was a celebrity chef but he understood about teamwork and happy staff. He knew everyone in his restaurants by name, right down to the kitchen porter, and would shake everyone’s hands at work.”

“gary knew everyone in his restaurants by name, right down to the kitchen porter and shook everyone’s hands at work.”

For those too young to remember, Gary ran a series of incredibly successful restaurants, appeared on MasterChef, Hell’s Kitchen, hosted his own TV series Rhodes Around Britain and wrote numerous best-selling cookbooks. He was also known for his trademark spiky hair and gregarious chef trousers.

“I wanted to pay tribute to Gary by bringing his classic trademark dishes to our menus at 215 for people to enjoy, to remind people how iconic Gary’s dishes really were,” Paul says.

215 in Summertown is at https://www.twoonefive.co.uk