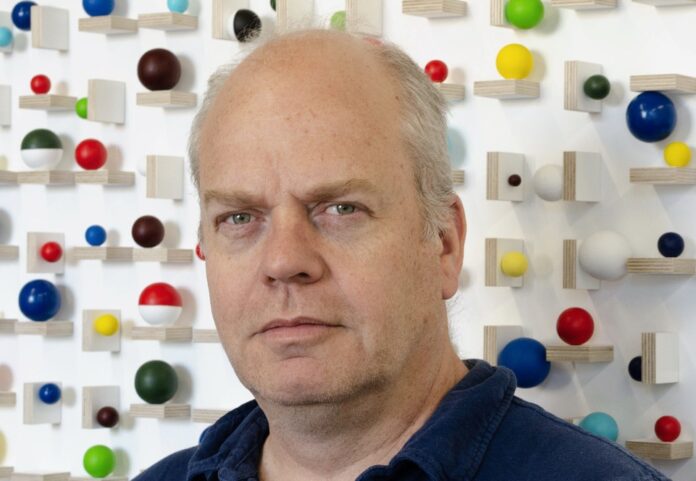 Stuart Hartley’s story is as extraordinary as his art, which is in huge demand across the globe, despite the pandemic.

A larger than life character, the 51 year-old has certainly led a rich life, ranging from a career in the police force, becoming a mature student at art school to his upbringing in Chorley in Lancashire and the many colourful characters he has met along the way.

“I was propelled on by an abject fear of failure – it had to work. I had to give it everything I had”

Stationed in the crime squad in Hackney aged 19, Stuart dealt with fraud, drugs and crime and even when a colleague was shot dead with a shotgun that didn’t deter him from “catching the bad guys”.

So his overwhelming desire to be an artist was only realised after an operation made Stuart reevaluate his life.

“I was in the police force for 12 years, but it was only after an appendix operation, when I was considering my own mortality, that I asked myself if I’d achieved everything I wanted out of life” he tells me.

“I’d always wanted to go art school, it was always at the back of my mind. I just couldn’t work out a way to fund it, let alone how to make a living from being an artist,” he explains.

“Becoming an artist wasn’t really considered a career in the small market town in the North West where I grew up,” he says. “My family didn’t really see it as an option, so instead I went off to catch the bad guys.”

But that moment in hospital changed everything – Stuart downsizing and using the equity to go to art school.

And yet embarking on a career as an artist aged 30 is no mean feat. “No, but I was like a kid in a sweet shop when I got there. I was so excited and enthusiastic. I couldn’t get enough of it,” Stuart, now 51, laughs.

“Plus I was propelled on by an abject fear of failure – it had to work. I had to give it everything I had,” he chuckles.

Starting with a foundation course in Carlisle, Stuart then went to Manchester University and The Slade School Of Art in London, by which time his art was already selling; his striking, individual, inimitable abstract 3D grid structures finding their way into offices, homes and buildings around the world.

“I was like a kid in a sweet shop when I got to art school. I was so excited and enthusiastic. I couldn’t get enough of it”

Known for fusing painting and sculpture, while his work appear almost mathematically structured, hidden amidst Stuart’s geometric work, between the colour, balls and cubes, lie words, poems, feelings, history, experiences and the magic of each of those moments as an entity. They are as much about space, colour and energy as they are about what is hidden within.

He also likes to quantify the isolation of a moment and how it breaks up the routine structure of daily life. For example, his work ‘Thursday’ represented all the people he came into contact with within a 24 hour period, depicted through numbers and colours – the effort he goes to in bringing these ideas to fruition in a fun but formative way, is what makes his art so attractive.

His global collectors certainly think so, his work selling from Washington to Hong Kong, Long Island and back, the latest vast piece selling for £45,000

So what can we expect from his new exhibition Brave New World at Zuleika Gallery which starts next week? “I see it as a chance to introduce myself,” he says.

“It makes me quite emotional just talking about it”

Thus, the exhibition will present Hartley’s 3D works from his Event & Incident and Pathways series, alongside a new series of watercolours on paper produced in 2021.

Hartley will also show new, site specific work concocted around the first ten words of famous novels and poems such as Aldous Huxley’s ‘Brave New World’, William Wordsworth’s ‘Upon Westminster Bridge’, and Siegfried Sassoon’s war poetry, whose letters are then randomly scattered to emphasise the powerful, colourful visual dance that he takes us on. “It makes me quite emotional just talking about it,” he says.

Seemingly pulsating with movement and activity, his pieces are as much about the space as the objects within.

So looking back is he surprised at the direction his art has taken? “To start with my understanding of contemporary art was minimal – I just knew I enjoyed painting. But my tutors at Manchester made me question and approach art in a different way, and from many different angles,” he says.

To be inquisitive and exploratory is a practice he still adheres to. “The question I still ask of my art is what did I learn and achieve, what could I improve on and what failed? That’s how you move forward,” he says.

“The question I still ask is what did I learn and achieve, what could I improve on and what failed? That’s how you move forward”

So how does he feel about the upcoming exhibition? “So much of my work is made in the studio and then shipped out to the buyer, or art fair, that the Zuleika Gallery show is actually hugely important to me.

“And if people just like the colour and form, the visuality of my work, that’s great, but if they want to discover more and try to unwrap the hidden messages then they can.”