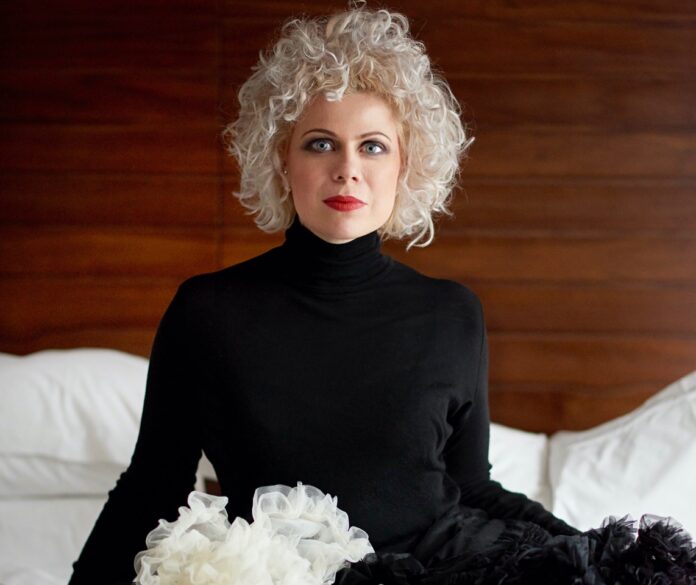 Gabriella Swallow is an old hand at this lockdown business. She’s already taken part in the VE Day celebrations in an empty Albert Hall accompanying Katherine Jenkins for the BBC.

She was also touring with comedian Rob Brydon when Covid 19 closed the show indefinitely. “We were having so much fun. Rob Brydon doesn’t have an off button so it was brilliant, brilliant fun, and then it just stopped, and here we are,” she says looking around her as if she can’t quite believe it.

“Hugh Jackman is a very generous man and really looks after you. Touring with An A-Lister shows you how it can be done”

And yet the renowned cellist still has a packed schedule, having just recorded her ‘Tribute to Jacqueline du Pré’ performance for The Oxford Festival Of The Arts which is being screened on June 25.

Gabriella Swallow is of course world famous in the classical music world, albeit as much for her unorthodox approach as her gifted cello playing.

Offered a place at the prestigious Chetham’s School of Music in Manchester aged just nine, she was then awarded the coveted Tagore Gold Medal at The Royal College of Music, notoriously performing Hugh Wood’s Cello Concerto, a largely unknown contemporary composition. “My tutor’s just didn’t know what to do with me,” she concedes.

Fiercely talented, forward thinking, liberal, adaptable, hard working, ambitious and experimental, Gabriella has made no bones about shifting her considerable merits to other musical genres from jazz and pop to TV presenting, which co-exist happily alongside her more serious engagements.

So while as a soloist Gabriella went on to make her South Bank debut with the London Sinfonietta in the world premiere of ‘About Water’ by Mark-Anthony Turnage, or performed Paul Max Edlin’s Cello Concerto with the South Bank Sinfonia, she has also toured with Rob Brydon, Hugh Jackman, Skunk Anansie and Bryan Ferry.

She worked on Last Night Of The Proms and Songs Of Praise, enjoyed an evening performing recently at Raymond Blanc’s Le Manoir, launched her own classical club night ‘Gabriella Swallow and her Urban Family’, and has recorded with the likes of Sade and Charlotte Church.

So does she see herself as a hybrid? “At the beginning, contemporary music was my absolute passion. It’s what I was known for and I got to know a lot of the composers that way. Then I got introduced to jazz musician Ian Shaw who asked me to record on Charlotte Church’s new album, and it went from there really. You get passed around when singer/songwriters trust you and you learn so much that way.

“Lots of people are frightened by music they don’t know or understand. I want to tell them that’s OK, it’s how it makes you feel that counts”

“So yes I think there is more to life than playing abstract contemporary music all the time, but I still enjoy it very much, and the cross over into light entertainment.

And her TV presenting? “I just think a musician is probably able to explain music better than most. Lots of people are frightened by music they don’t know or understand. I want to tell them that’s OK, it’s how it makes you feel that counts.

“So many people are happy going to the Tate Modern or to read something new but when it comes to classical music they are flummoxed and it panics them. I want to give them a map and I think it’s important for a musician to speak directly to them, not someone who presents Gardeners’ World.”

Born in Belfast, Gabriella’s father was head of dentistry at Queen’s University. The family moved to Lincolnshire because of the political situation and Gabriella started playing the recorder and wouldn’t put it down. When asked which string instrument she’d like to play she asked for the biggest and her parents bought her a cello

“They lied of course, the double bass is much bigger, but they had a small car,” she laughs. “And yet because of Jacqueline Du Pre’s Elgar Cello Concerto I knew there was something in it. “

“I was braver after my marriage ENDED and said yes to everything, every gig and recording session…”

It was Gabriella’s recorder playing that got her into Chetham’s School of Music and the cello she then excelled at. Immersed in an intense musical world surrounded by much older peers, prodigies and pupils, I wonder how she feels about that as a mother of two. “It was quite isolating I suppose. Manchester was a big city compared with rural Lincolnshire, so I did feel very alone. It was a baptism of fire. But my contemporaries were people like the conductor Daniel Harding. They were my family really. We spent all our time together.

“In terms of what it did to my family there were sacrifices – my sister grew up without a sister, apart from the prodigal child who returned from time to time and got all the attention. My parents would say ‘but that’s what you wanted’. I was nine years old, what did I know?”

Gabriella says that she always felt like the black sheep, whether by playing in East End pubs as a student rather than the Wigmore Hall, or choosing contemporary music over the classics – she’s never been pigeon-holed. “I think knowing your strengths is your greatest forte,” she says diplomatically.

Not that her career has been all plain sailing. Her marriage to British composer Mark-Anthony Turnage came unstuck and they have been co-parenting ever since. Ironically she didn’t work when married because Turnage was involved in his opera Anna Nicole and it was ‘his time’. “It wasn’t his fault I was only 22 and someone had to be at home with the kids. Plus we were in America a lot and I couldn’t work there,” she concedes.

Thankfully, Gabriella picked up her career again as a singleton, employed an au pair and began touring again. “My ex-husband works from home a lot, so we’ve made it work. I was braver after my marriage ended and said yes to everything, every gig and recording session.

Which meant when the tour with Hugh Jackman came up she said yes! “Wow, that was a lesson in how it can be done – working with an A-lister who cares. Everyone got their two minutes with Hugh and he really looked after you. A very generous man. He bought us all a lottery scratchcard every Friday.

“So I say yes to anything as long as it moves me and touches me, which means I’ve experienced some wonderful things. It means my career is now a balance between Brahms and Rachmaninov and the Downton Abbey’s of this world (she performed the music for the TV series) and I don’t really care what the purists say.”

Neither has Gabriella sat still for a minute in lockdown, setting up musical postcards – an online classical music request service http:// patreon.com/gabriellaswallow – as well as numerous virtual performances, including Oxford Festival Of The Arts.

So what can we expect? “One of the good things about the lockdown is that composers have been so prolific so I’m playing the world premieres of Martin Bussey’s Soul Song from Mary Pieces and Alison Berry’s Takotsubo exclusively at the festival, alongside some Bach in G major because it’s a positive piece, punctuated by Kaija Saariaho’s Spins and Spells, that I played at the Royal College Of Music, so a really wide selection,” she says.

And how does she feel about Jacquline Du Pre herself? “A lot of cellists started in the mid 80s because of her. She felt the music in the same way that I do, and she was a woman who moved around a lot while she played. I saw her and just thought ‘that’s how I feel when I play’. So I bought my 200 year-old cello at Beare’s, the same place as she did, and it’s still the one I use now. It was built in Oxford in 1820!”

As for Oxford, Gabriella says: “I’ve worked with Oxford Philharmonic and Oxford Sinfonia, Bach Choir and been to Le Manoir. And of course Jacqueline Du Pre was at St Hilda’s here, so Oxford is one of my happy places.”

And how does she feel about the future? “The problem of course, in my industry, is that we just don’t know when we are going to be able to return to work.

“But my job is to entertain and while performing virtually isn’t ideal, it’s the best option to keep our audiences on board. It’s about keeping that connection going. It’s our duty.”

For more details on The Oxford Festival Of The Arts #OFAvirtual and Gabriella Swallow in concert go to https://artsfestivaloxford.org/events/gabriella-swallow-performs/

#OFAvirtual runs from from June 18 – July 5 with music, talks, dance, workshops, theatre and even cookery! Find out more at https://www.oxinabox.co.uk/oxfords-much-loved-festival-of-the-arts-will-go-ahead-but-as-ofavirtual-for-2020/

The Ultimate Picture Palace saved by £50,000 crowdfunder campaign and will reopen in September after facing ‘biggest challenge’ in its 109 year history