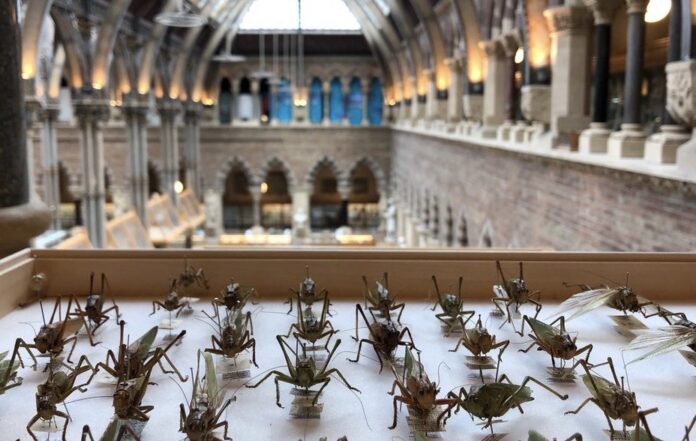 Jericho Comedy has teamed up with Oxford’s Museum of Natural History to present an evening of stand-up comedy inspired by……insects!

This ‘Creepy crawly comedy night’ on Friday 12th November will be a special one off night at the Natural History Museum out of hours, enjoying the exhibits late at night, with a full bar on offer, as Jericho Comedy answer the challenge of whether bugs are a subject worth laughing about.

If you’re not laughing, you’ll certainly be learning. Expect jokes about June bugs, material about mayflies, banter about beetles, and riffs on roaches.

an hour of entertainment with award winning comedians joking about bugs, and live insect handling sessions with insect specialists

Which begs the question how and why? “This is our 5th comedy show in collaboration with the Natural History Museum and our latest challenge was whether or not we could make insects and bugs funny,” Harry Househam of Jericho Comedy said

“So we took it as a personal challenge to see if we could get comedians to write sets and material about insects that would get people laughing and learning.”

“We love putting on shows that are a bit nerdy, niche, and scientific, we think our comedy shows should be a reflection of the city we run them in, so we absolutely love running these scientific and academic themed shows, especially this one which is a celebration of the museum’s insect collection!”

From moths to woodlice, ants, bees and more, no stone has been left unturned (geddit) and there are plenty of interesting facts to soak up whilst laughing the night away in one of the world’s oldest museums!

“This is a completely unique evening guaranteed to be the bees knees, you may even get to touch them!”

Not only do you get an hour of entertainment with an award winning line-up of comedians joking about bugs, but the museum will also be hosting live insect handling sessions with insect specialists standing by to make sure this a well informed and humorous evening of insect themed fun.

“This is a completely unique evening guaranteed to be the bees knees, you may even get to touch them,” Harry adds.

This event is part of the museum’s Hope for the Future campaign aiming to raise awareness of their fantastic insect collection, while highlighting the importance of insects in our eco-system. Insects have declined by 75% in the past 50 years – and the consequences may soon be catastrophic. This night of insect silliness is a fantastic way of highlighting the issue.

Some of the highlights of the museums’s insect collections include Livingstone’s tsetse fly, Australian insects collected by Charles Darwin, and several thousand specimens including numerous types collected by Alfred Russell Wallace in the Malay Archipelago. The insect collection is one of the best in the world.

Jericho Comedy’s Creepy Crawly Comedy Night on November 12 boasts two shows, one at 7-8pm and a later show 8.30-9.30pm. Book tickets here. For those being a solitary bee at home, the show is also being streamed via Next Up tickets – book here