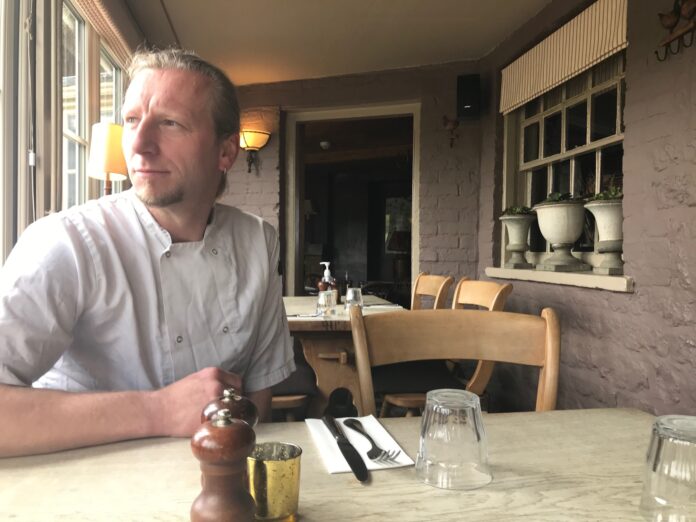 It’s all go at The Mole & Chicken in Easington which opened its doors for the first time since Christmas this week with a new head chef at the helm Jan Hvizdos.

With an impressive resume under his belt, including a stint under Heston Blumenthal at The Fat Duck in Bray, Jan is already making his mark, as our lunch there proved.

Formerly at The Plough 38 in central Oxford, Jan, who hails from Czechoslovakia, has now come on board to continue The Mole & Chicken’s excellent reputation for food since being taken over by Sarah Heather-Holt last year.

“Jan has been so proactive already. He plans to grow our own produce in the fields next to the pub, he forages for a lot of our ingredients, is really into fermenting and pickling, and we have rekitted the kitchen for him,” landlord Sarah told me. “It’s really exciting to have him on board.”

Tucked away in the beautiful village of Easington near Thame and Long Crendon, the views of the surrounding countryside were much enjoyed on Wednesday lunchtime as we basked in the sunshine for an hour on the extensive decking area.

The car park was full, and The Mole & Chicken’s eclectic clientele ranging from family reunions to a more upmarket crowd.

There is a set menu for those who want to keep things simple – two courses for £17, three for £22 which we dabbled in, but while we scanned the menus the heavens opened and we rushed inside, happy to settle into its charming, historic interior.

The friendly staff, headed up by the lovely Kelly, make sure everything runs smoothly, even managing to reseat an entire pub full of punters, with the minimum of disturbance.

And then the food arrived; the fennel and mushroom soup with a bronze fennel creme fraiche, bread and butter was magnificent and a brilliant start to what turned out to be a truly impressive meal.

Even more impressive was the crispy baby squid, mooli, methi and watercress salad with a curry emulsion. Not only was it a vision to behold, a far cry from the oily round circular calamari you get on holiday, but the curry emulsion was genius, taking the dish on a really unexpected but delicious tangent. The dish of the day.

For mains the fillet of Chalk stream sea trout with English asparagus and minted Jersey royals, also from the set menu, arriving immersed in a vibrant green asparagus and leek veloute. The soft, perfectly cooked fish, the creamy sauce, the bite of the potatoes and crunch of the asparagus was a clever combination of texture and seasonal flavour. Spring fare at its best.

My son is still talking about his steak and chips. How he managed to consume the entire Mole’s 35 Day, dry aged Hereford 10oz bone in sirloin steak, with a marrowbone and tarragon sauce, king oyster mushroom and triple cooked chips is a mystery. But it was a masterpiece – huge, hearty but refined, the “gravy” as memorable as the chips, (a Jan speciality) and it all disappeared in a trice.

That all time favourite, the sticky toffee pudding, came with a Pedro Ximenez caramel sauce, and vanilla ice cream and was rich and dark and wonderful. On the other side of the table the Limoncello sorbet was more palette cleansing but equally well received.

You’d never have known that a few days before the pub had been closed for months or that we were sampling Jan’s first few days in the kitchens – a superb meal all round.

The Mole & Chicken’s sister pub The Mole Inn in Toot Baldon won our Best Newcomer awards at the Ox In The Box Food Awards last year. Thanks to Jan, and Sarah’s amazing team, The Mole & Chicken looks like it’s already following suit.

Either way, if you fancy some great food, an historic pub, a tasteful terrace and a view that defies belief, I’d get down there quick before everyone finds out!

Go to https://themoleandchicken.co.uk to book or for more details.