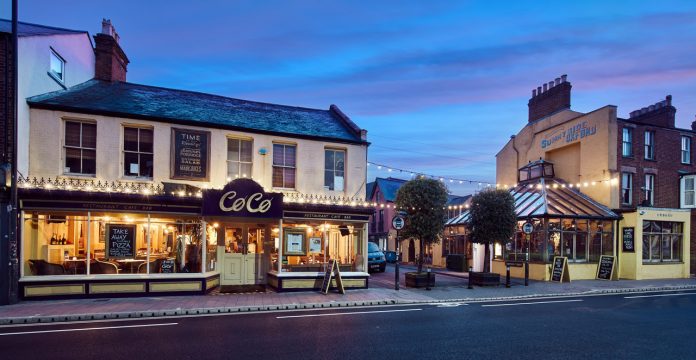 “I’ve got mixed emotions. I love walking into my restaurants when they’re busy and seeing my customers enjoying themselves and having a great time,” Clinton Pugh tells me, sitting on one of the Moroccan banquettes in the KazBar on Cowley Road, as the cleaners and staff get ready to open.

“It’s been very satisfying creating these living breathing businesses full of amazing people and customers, and I hope they have all taken something away from the experience.

“That’s the saddest thing about all this. But while it’s been a lot of fun, it’s time to retire.

“I don’t want to think about restaurants anymore. It’s a seven day a week job so I’m going to put them on the market.”

Words I, nor anyone else in Oxford, ever thought we’d hear from this dynamic, vivacious, friendly, funny, charismatic, energetic, determined restaurateur.

The unthinkable has happened because Oxford without a Clinton Pugh restaurant, bar or cafe is inconceivable.

After all, this is the man who brought us the glamorous Baedekers on Cornmarket, the Mexican La Cantina, Cafe Coco, Kazbar and Cafe Baba on Cowley Road, his fine dining establishment The Lemon Tree on Woodstock Road, the sophisticated Grand Cafe on the High Street, the less successful Oxford Organic Burger Company and Coco Royal, and then Cafe Tarifa.

Clinton almost single-handedly transformed Cowley Road into the cool hub it is now when he opened his first restaurant there 27 years ago.

“When I first got there it was just full of Indian restaurants but it still had an arty, vibrant, hip, student vibe. So it was the obvious place to set up,” he remembers.

I was there as a student when Cafe Coco opened in 1992 and we couldn’t believe our luck. I have been living my best life in his coterie of eateries ever since – my undergraduate afternoons spent stretching out his happy hour cocktails, my hen do at Kazbar, my 40th at Tarifa, so many birthdays and celebrations, hungover brunches, work dos, consolation sessions, reviews and partying have panned out there over the years.

But Clinton has had enough. His restaurants are still making money, that’s not the problem, but he’s tired. His youngest daughter is now 16 and he wants to stretch his wings and do something else, anything but restaurants it would seem. Still, it is a huge loss to our cultural and culinary landscape.

“I’m looking at it as a positive thing,” he tells me as I sit there disconsolate, “but having reached the ripe old age of 61, I really want to get to 65 without running restaurants.

“Because it does take a lot out of you, and maintaining that energy seven days a week, well I think I’ve done my time. It’s time to retire.

“I want to be able to enjoy my weekends and do something different, somewhere hotter. Maybe I’ll open up somewhere else in a warmer part of the world, or open a small boutique hotel, but it’s time to sell up.”

The young Clinton Pugh first came to Oxford aged 26 to run Clareys, an American themed pizza restaurant. He then went into partnership and opened Baedekers and La Contina before getting into trouble as a property developer and selling the lot.

Starting from scratch he opened Cafe Coco in 1992 and the rest is history, as site after site was added to his burgeoning portfolio.

“I called it sititis – until someone pointed out that I didn’t have to buy every site I saw,” he laughs.

Trained as a designer and specialising in restaurant design at art college, he had an eye for what a restaurant would look like long before he bought it.

“I came from a catering background – my parents ran a small hotel. So when I was at art college I would work on my designs by day and at night work in Clouds Cafe on Kingston Hill which was American themed with enamel throw-back walls and big palm trees. It was always buzzing and such an exciting place to work. I knew then that was the kind of catering I wanted to do,” he remembers.

And so it was that his memorable designs came into play around Oxford: “I wanted Baedekers to be like a 1920s/1930s liner – so it was Art Deco and very glamorous with a huge skylight and an eclectic menu.”

The Kazbar’s Moroccan feel was based on Andalucia and the Moors: “I had thought of opening a Kazbar style chain, but I had a young family, so being a big fish in a small pond made more sense.

His daughter Florence (now a famous actress) kept getting pneumonia so the family moved to Southern Spain where it was warmer.

“I  used to bring artefacts and furniture back on the plane with me for Kazbar – doors and windows, that sort of thing. They didn’t weigh your hand luggage then, and I commuted between Oxford and Andalucia.

“With Cafe Coco I wanted to create something that was timeless, somewhere classic, where once you walked in you could be anywhere.

“It was the same with the Grand Cafe – it needed to be elegant, based on the Viennese cafes, with a contemporary twist.”

The beloved Lemon Tree had more of a sunny, Mediterranean feel to it  – Tuscany maybe with its polished yellow walls and atrium garden.

“The design and influence of my restaurants have played such an important part in their success, because the atmosphere is what draws people to them. It’s interesting how iconic those designs have now become,” Clinton concedes.

“Of course you have to keep working on that, and the staff and the menus. When Cocos first opened it just sold pizzas, but now it has burgers and salads and brunch – we keep tweaking it, but it has to be consistent.”

So how does he feel after about selling up? “I do feel proud of what we have achieved -creating somewhere that people appreciate.

“Coco’s is 27 years old now and its character has just grown and enhanced as it’s got older. We still have customers who have been coming since it opened and others who come back with their children.

“We are reliant on staff of course and It’s been my privilege and honour to work with so many great people over the years. That’s what makes this so sad.

“So I hope people continue to support us until we have found a buyer,” he says, before adding “and I just hope my sititus doesn’t come back.”

Cafe Coco, Kazbar and Cafe Tarifa are on the market with christie.com