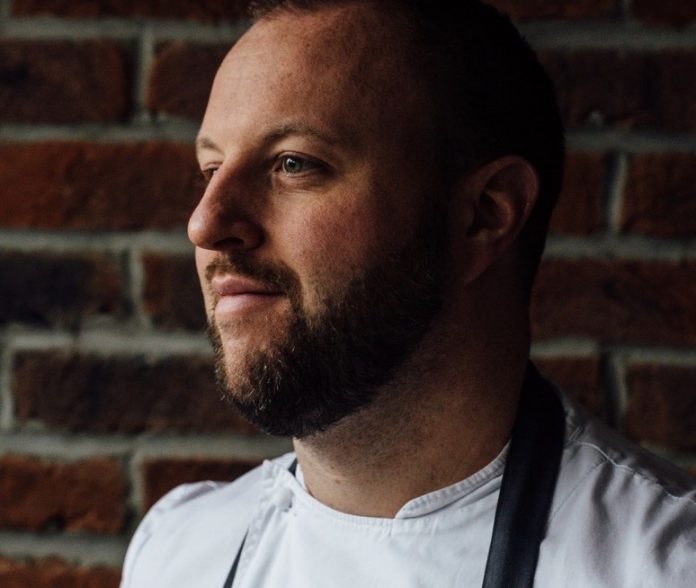 Oxford’s only Michelin starred restaurant The Oxford Kitchen is currently being transformed, and will reopen as 215.

Plans were already afoot to radically shake up The Oxford Kitchen when the coronavirus pandemic hit, so the team is continuing to manifest the changes until they can officially open 215 doors with a new, attractive, affordable and sustainable offering.

Head chef Paul Welburn, who won Ox In A Box’s coveted Best Chef award, is really excited about the news, if frustrated that the team can’t get on with their plans immediately.

“the taster menu days are over I think. It’s time to move on and adjust to the climate and the needs of our customers by providing a more relaxed and accessible space while losing none of our quality,” head chef paul welburn

“The owners and myself have decided to reopen the site, once it’s safe to do so, and rebuild and start the journey again,” he told us.

“We have decided to rebrand and rename the site in Summertown to give our customers a new, more relaxed offering when they return after this crisis,” he adds.

“So, it’s exciting even though we are incredibly proud of what we have achieved so far.”

So why the change when Oxford Kitchen was doing so well? “I just think people want more choice and accessibility now from a menu. They don’t always want fine dining, so we are trying to be as proactive as possible around that while providing the same style and quality of food. It’s good to adapt,” he says.

So how will that work? “We have managed to secure the core team, albeit a smaller one, to man a more accessible restaurant which maintains the same level of care, passion and quality that they have come to expect at Oxford Kitchen.”

As for the site, Paul says it will offer a simpler offering with a less restrictive menu, but the same quality.

“In some cases the menu will change daily, but we are keen to keep our core values as they have been the key to our success so far. We want 215 to be welcoming and relaxed, with great cooking, amazing produce, seasonality and flavour so we will continually change the dishes to keep things fresh.

More of a bistro or brasserie then? “I’m not a fan of branding sites with words like  bistro, brasserie or restaurant,” Paul says. “I think the perception is misguided. It’s what we do within that matters.

“MY FOOD and style of cooking WILL STAY THE SAME. We don’t want to stop everything we have achieved and start again, but to build on our offering by adjusting and expanding it – to keep things fresh.”

“But essentially, 215 will be a relaxed and comfortable eaterie, where the food evolves constantly.”

Let’s go back a minute to see what Paul and the team have achieved since arriving at Oxford Kitchen in 2017. Hailing from Scarborough, Paul worked under the likes of famous chefs Richard Corrigan and the late Gary Rhodes, latterly running Rhodes’ W1 flagship restaurant in London and retaining its accolades for five years.

He also appeared on BBC’s Great British Menu before arriving at Oxford Kitchen. By October 2018 it had been awarded a Michelin star which it retained last year as well and three AA rosettes.

So will the food change? “Yes and no. We want people to be able to come in for a light one course lunch and a glass of wine, or a set menu,” Paul says.

“But the taster menu days are over I think. It’s time to move on and adjust with the climate and the needs of our customers.

“My food and style however will stay the same. It will still be about seasonality and great ingredients. We will just be evolving the menu. We don’t want to stop everything we have achieved and start again, just to build on our offering by adjusting and expanding it – to keep things fresh.”

“Myself and Peter (my right hand man of nearly a decade), will be at the helm still, and keeping to the standards and quality that we are renowned for is paramount.”

It means that if you pop by for lunch at 215 when it reopens you can expect a varied selection of individually priced large and small dishes, eaten shared by the whole table or individually, as well as a few small plates to eat in a hurry.

In the evening diners can enjoy a more classic 2 or 3 course fixed affordable menu.

“It will be the diners choice,” Paul says.

An exciting premise then? “Yes, although we were on quite a journey with the Oxford Kitchen, and one that I was incredibly proud of by achieving the only Michelin Star in central Oxford.

“But 215 will be a new journey that has so much to offer and bring to Summertown, even though the world has changed overnight and it is a very difficult time for the industry as a whole.”

A little ray of positivity then in these bleak times, and yet there are still so many uncertainties. Does that trouble Paul?

“When we reopen the site of course isn’t clear. We are all in that unknown period. But we are taking this as a chance to be proactive as far as 215 is concerned.

“It means we have a fighting chance to make sure all the hard work we have put into the success at Oxford Kitchen is not lost, and 215 can open, build and evolve, much as we did before, despite this being the most difficult time this industry has faced.

“We want to create a site that is not just a destination or special occasion restaurant, but one where you can enjoy quality dining more regularly.”

So is he feeling positive? “I for one am determined to continue all the hard work we put in and bring the same site and team (albeit smaller) to continue the journey again.

“So yes, we want to make sure that when people can go out to eat again they come here again and again.”

And will the Michelin team agree? “I hope so,” Paul grins.

I’ll be at the front of the queue.