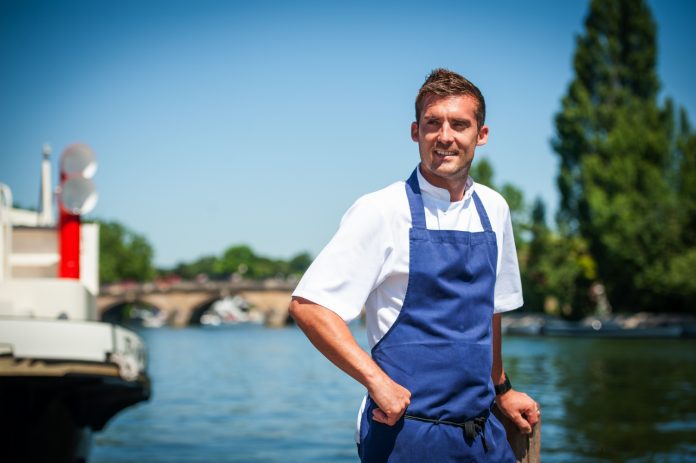 “Was I an alcoholic? No. Was I drinking too much? Yes.”

Shaun Dickens, restaurateur, head chef, ex Manoir protege – ambitious, brilliant, driven, young. He owns his own place in Henley – the award-winning Shaun Dickens at the Boathouse. Or did, because a few months ago he renamed it Bistro at The Boathouse, and hasn’t looked back since.

It’s not the only thing that’s changed. Shaun has also rethought his aims, his outlook, his priorities, his lifestyle, his choices, and is much happier for it.

“I just wasn’t prepared to work the way I was for the next 10-15 years,” he tells me. “I wanted to prove that you can be in the kitchen and have a work/life balance.

“It’s vital to have some sort of normal. I wanted to take my son Alfie to school, do the school run and pick him up everyday. For me it’s an important thing to do.

“But believe me, in a chef’s world that extra time makes a massive difference in the kitchens. It’s a lifetime,” he laughs. “And it’s the best thing I ever did.”

“Alfie was born 13 weeks prematurely and my wife Gemma was in the neonatal ward for five weeks. And I went back to work”

But let’s go back, way back, when Shaun was the new young chef on everyone’s lips.

He trained at Westminster Kingsway College in London – one of six students to appear on ITV’s Yes Chef!

His first position was at Raymond Blanc’s two Michelin star restaurant Le Manoir, before he moved to New York to work for Thomas Keller at the three Michelin star Per Se. He returned to England two years later and worked at L’Ortolan in Reading, which also holds a Michelin star. During this time he came third in the Restaurant Association’s Young Chef Young Waiter 2009 competition, came third in the Craft Guild of Chefs’ Young National Chef of the Year competition and went on to win The Caterer’s Acorn Award, which recognises 30 people under the age of 30 who have made a significant impression in their field.

But more than anything Shuan wanted his own place, and after searching hard came across The Boathouse in Henley.

“I wouldn’t settle for anything other than my own place,” he explains. “I didn’t want to work for anyone else. I wanted to do it my own way,” and then he pauses. “But then no one tells you the negatives about working 24/7. it turns out it’s hard being your own boss, because you have all the risk.”

“I was 28 when The Boathouse came along. I thought if I gave it everything  and did everything in my power it couldn’t fail – to be the best you can be and try your hardest.”

“something just clicked. I asked myself ‘what am I doing? People would cut their arm off for what I’ve got; a house in Henley, health, family, children, my own restaurant – so why am I so goddamn miserable? “

But that came at a cost: “I left for work at 7.30am and came home at midnight.

“I look back now and ask would I have done it differently. And yes I would have done. Alfie was born 13 weeks prematurely and my wife Gemma was in the neonatal ward for five weeks. And I went back to work. Now, I can’t imagine what was so important that I couldn’t get some cover. But I didn’t take any time off. He was born on the Thursday and I was back at work in the Saturday.

“The restaurant  was the most important thing in my life . That decision will always stick out to me. That during the biggest moment of my life when my son was born, I put the restaurant first rather than be there for my family or take some paternity cover,” he says.

He looks good though Shaun, like a massive burden has been taken off his shoulders – eager, energetic and with that fire in his belly again.

“I couldn’t see what I was doing it for. I had always wanted to be the best chef in the world, the best husband, the best dad. But everything started blurring into one. I had to be perfect.”

Not that he and Gemma had it easy at The Boathouse. Yes, it opened to great reviews and there was a buzz about this fantastic new chef setting up shop on the river in Henley.

In 2013, it was named in the top 100 restaurants in the country by OpenTable/Toptable.The following year it won a Best of Britain Award in Tatler’s restaurant awards.

But then, nine months in, when everything was going swimmingly, disaster occurred.

“The first time it flooded I had to shut for two days. Then it happened again, but much worse. We had to start again from scratch and shut for three months.

“It knocked us for six, and cost us a fortune because there was nothing left. Once we reopened, it took us a year to get back on our feet because everyone thought we had closed for good. We had lost that momentum and it took a long time to get it back.

“So that was the hardest time.”

Back at the grindstone, Shaun worked relentlessly to be the best, pushing himself too hard, not taking care of his mental health.

“I was stopping but not assessing. I was very methodical in my routine. I’m very systematic but I couldn’t take my eye off the ball.

“But after a few years I got very lethargic. I couldn’t see what I was doing it for. I had always wanted to be the best chef in the world, the best husband, the best dad. But everything started blurring into one. I had to be perfect.

“What people are eating has changed. I’m not saying fine dining is dead at all, but is has changed, and I realised I was only cooking for the guides and no one else”

“I was really negative and it would get noticed by the team. There was lots of tension in the kitchen because of me. Gemma would stop and ask what was wrong because I had a face like thunder, but I didn’t even realise how miserable I was. I cut myself off from everyone and everything. I wanted someone else to take the lead because you can’t be happy all the time,” he says in hindsight.

Instead, Shaun would go to the pub after lunch: “I was looking for answers on social media to all my problems – not being busy enough, or not being busy at the right times, you can drive yourself mad, just everyday life stuff. I’d have a beer, then go back later before service for one more before the evening service. Then I would have crushing lows at work and return to the pub afterwards.

“I knew what the answer was. I was wasting my life on my phone in the pub. I didn’t realise it at the time, but I was thinking ‘is this really it?’

“And then something just clicked. I asked myself ‘what am I doing? People would cut their arm off for what I’ve got; a house in Henley, health, family, children, my own restaurant so why am I so goddamn miserable?

“I knew I had to change something. It was such a Eureka moment in my life. Something dramatic.

“I’d always been a big drinker, the loudest, the clown, so I promised myself I’d go a year without beer.

“I’ve passed my 90 day challenge and I’ve stopped counting. I’ve also always smoked 20 a day, I have an addictive personality, so I’ve given up smoking, for my health and for my son.

“But I also knew there was more to it than that. So I drew a line in the sand. What people are eating has changed. I’m not saying fine dining is dead at all, but is has changed, and I realised I was only cooking for the guides and no one else.

“I’ve earned my awards and rosettes and I know I can cook, but the most important thing in life isn’t winning the Oscar but cooking what people want to eat.

“Shaun Dickens at The Boathouse had become a special occasion place, so we’ve changed that. It’s now Bistro at The Boathouse and we are busier than ever. For example, we always did roasts but now it’s less intimidating. One family has been back three Sundays in a row.

“Cooking for the guides every day puts you under such pressure. Now I cook food people really want to eat.”

A look at his new menu confirms that. It’s full of mouthwatering options, highbrow when required, and more relaxed, when you don’t.

In short, the new menu covers all the bases.

“In the first year we opened I wouldn’t let our customers eat outside in case the micro herbs blew away, that’s how uptight I was. But now I realise people want to sit in the sun, look at the views and watch the world go by while they have lunch and there’s nothing wrong with that.

“And if they want to do that with a burger and a beer then who am I to say no. I’d rather they’re eating mine than heading off down the road somewhere else, so I have addressed the elephant in the room.

“Will I ever get a Michelin star? Who knows. I might still open a tiny 14 seater pop up somewhere one day, but it’s not going to haunt me anymore.

“It’s about providing a restaurant that people want to eat in and it’s the best thing I’ve ever done. I have no regrets. It was 100% the right thing to do.

So how does he feel, looking back? “I had so many demons – that I wasn’t working hard enough, or serving the right food at the right time, for the right people. That all feels a million miles away.

“I don’t look down my nose at anyone. There is no right or wrong. But I get up now in the mornings, have a bowl of porridge, play with my son and I haven’t been this happy for a long time or felt this positive. Now I realise that no one else will make these things happen if you don’t.”

“I’m 35 – I have so much time ahead of me. I have so many positive things in terms of my life and my business. I couldn’t be in a better place.”

So what’s his advice? “To be true to yourself. And not to worry what other people think. It doesn’t matter. Just do what’s right for you. Its not about anyone else. It has been quite a rollercoaster ride. But I wouldn’t have changed it.”