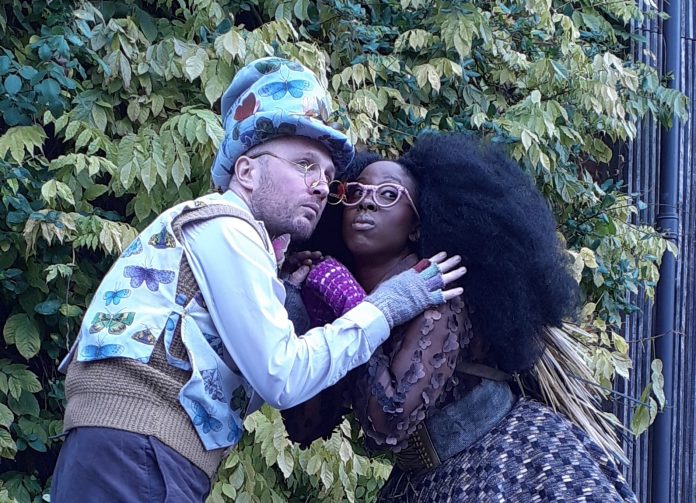 “When we get to the end of the story, you will know more than you do now…”

This Christmas, Creation Theatre will be really turning down the temperature and transforming The North Wall into the frozen wastes of Lapland with the company’s unique take on the children’s classic The Snow Queen directed by Gari Jones.

“Creation’s Snow Queen has a very Christmassy message in among all the anarchy and fun, which is about how you treat and value the people you love.”

Gerda’s best friend Kai has gone missing and she can’t find him anywhere. Luckily there is all sorts of helpful people she can ask; a river, some rose bushes, a crow, a robber girl and her talking doves…. you get the picture.

With the return of the team behind the company’s recent Christmas shows (Peter Pan, A Christmas Carol, Snow White) you can expect the signature Creation brand of anarchy, music, laughter and beautiful storytelling.

Charlie Morley, Creation Theatre’s General Manager, said: “Snow Queen is our sixth production put together by this team. We take a traditional story and then go mad with it! It’s chaos, fun and can be infinitely silly. It’s not a cutesy Christmas production although there is a lot of heart to it, but it has lots of silly references.”

James Burton, who plays a multitude of characters in the show, helped explain the story: “Kai has been kidnapped by the Snow Queen. He has had ice crystals in his heart and eyes and it’s turned him mean. He is living with the snow queen, and Gerda has this epic journey to search for him, but it is also a journey of self-discovery. Along the way she meets incredible and crazy characters.

“It’s a great story because at its core it’s about growing up, and the changes that we all have to go through to be the people we really want to be”

“I am playing eight or nine and some of them are a little odd!”

“We even have remote control cars to demonstrate the epic journey of Gerda’s search for her missing friend.”

Charlie added: “Gerda thinks the outside world is a complicated place that she doesn’t understand, but actually the other people she meets are a bit mad, and she turns out to be the sane one in the middle of it all! She keeps coming across all these eccentrics and learns how to deal with them.”

And what of the dark and chilling content of the original story of The Snow Queen? Annabelle Terry who plays Gerda said: “In our version she still goes through all that, but she is overcoming the fear and getting older, stronger and braver, and that was the point of the production really. Playing just one character while all this happens around me is a challenging in its own way, so I am having a lot of fun.”

Bart Lambert plays Kai. He said: “I turn bad and then I go missing! It’s a great story because at its core it’s about growing up, and the changes that we all have to go through to be the people we really want to be.

“We meet some crazy, cracked characters along the way and it’s mad and anarchic, but in some way each one of those characters is craving a change. That’s the really cool and lovely thing about the show.”

Veronica Beatrice Lewis plays ten characters, as well as a Jamaican grandmother, says: “There is space in this production to be fun and have fun, thanks to Creation.” Performing with the Oxford theatre company for the first time, she said: “We have children performing alongside us as well, which is so brilliant. If I was a child, I would be so excited to be working with professionals.”

Natasha Rickman plays The Snow Queen, a crow and an unhinged robber. She said: “What’s really lovely is that Gari has looked at the snow queen and considered why she is so bad and evil. He thought about the traditional idea that people are either good or bad and that perhaps we are all a mixture of both, and how to figure that out as you grow up. “So Creation’s The Snow Queen has a very Christmassy message in among all the anarchy and the fun, which is about how you treat and value the people you love.”

The production includes some big song and dance numbers and because The North Wall is so versatile, the production is being performed in a traverse shape. Charlie added: “We have an amazing choreographer, so there is a lot of singing and dancing.”

Tickets are selling really fast so if you want to see it, book now!